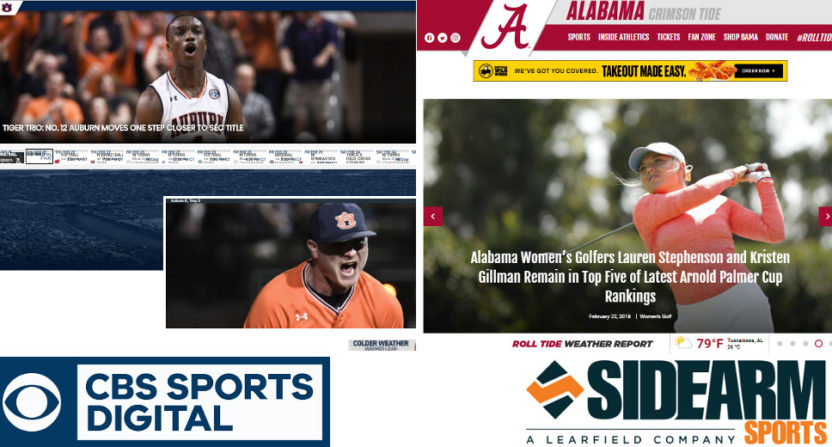 There’s been a big change in the college sports website space this month, with two key providers in CBS Interactive and Sidearm Sports teaming up. This new partnership will cover over 1,100 high school and college websites and lead to over 14,000 live events being streamed through CBS’ SportsLive service. The deal will see CBS handling video streaming, video distribution and end-to-end advertising operations for all the schools, with Sidearm now managing the schools’ websites and mobile platforms and providing hosting and infrastructure. Jeff Gerttula, the executive vice president and general manager of CBS Sports Digital, spoke to Awful Announcing recently about the deal, and said it lets each company handle what they’re particularly good at.

“What made this partnership appealing is we get to play to our strengths, each of our relative strengths. Specifically, that’s web and mobile hosting management for Sidearm, and for CBS Advanced Media, that’s video and ad operations. We each get to take advantage of those strengths across a broader roster of clients…and ultimately provide a better service level across the board, as we’re each doing what we do best.”

CBS Interactive’s partners page lists 163 sites that were counted as partners and affiliates before this partnership, with the 67 school partners including the likes of Ohio State, Auburn and Notre Dame. (The recently-released list of their fourth-quarter top 25 schools in overall traffic and uniques provides a good glimpse of who’s involved here.) Sidearm has a ton of clients of their own (including Alabama, Iowa and Stanford), so the new combined partnership will cover more than 1,100 college and high school athletic websites, and it’s adding even more big-name brands, now covering 85 per cent of Power Five schools.  Gerttula said that kind of jump in scale is going to be big for CBS, and it will also benefit the schools.

“It’s interesting for us because now we get to apply our ad operations, our video operations to a much broader set of clients. And also, we get those events and we’re able to offer expanded distribution and additional exposure for their live events across those schools within our SportsLive service, our subscription over-the-top service.”

SportsLive is available starting at $9.95 a month, and offers live video and audio streaming for a ton of college events with their school partners, plus professional rodeo and some other sports events. And its lineup’s going to get much bigger  as a result of this addition.

Gerttula said CBS’ strengths in video and advertising will provide value to the schools across the partnership.

Under this new partnership, Sidearm will handle website management, mobile platform management, hosting and infrastructure for all the combined clients. Gerttula said they were a natural fit to work with here given their experience in the space.

Another element to keep in mind here is that the school and league sites CBS currently operates count towards the overall CBS Sports traffic numbers through services like ComScore, and that the new sites added as part of this will likely count there as well. Gerttula said that traffic isn’t why they made this move, but it’s a nice benefit.

“It’s not the reason for the deal, but we do expect it to. As we’re delivering the ad solutions, as we’re monetizing the inventory on these school sites, that would be part of our ComScore.”

He said the school sites they currently operate have been a “modest, but notable” source of traffic relative to their overall operations. So, while that’s not the biggest factor here, adding these other sites may further boost CBS’ overall ComScore numbers.

Overall, Gerttula said this is an important deal for CBS, and one that sets them up well for the future.

“We view this as a significant partnership for CBSi Advanced Media,” he said. “For us, this is the key step to becoming a more significant player in the streaming space for live sports events, with those 14,000 live events. We’re really excited and we’re excited to partner with Sidearm.”