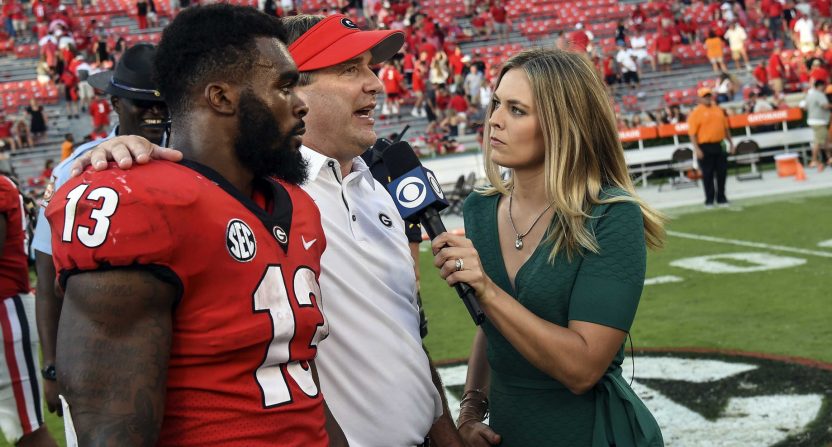 After just five years at CBS Sports, reporter Jamie Erdahl is not only getting more high profile assignments for the network but has seen her multi-platform roles expanded to other programming, including hosting duties on CBS Sports Network and an anchor role for the launch of CBS Sports HQ.

“I am beyond ready and excited to be able to be a part of it,” Erdahl told Awful Announcing about her promotion to the second weekend of the tourney. “It’s so addictive, in my opinion. You kind of get laced in with these teams and these stories.”

Erdahl said she’s excited to call Kentucky for the second straight weekend, “just to feel like you’re kind of seeing it through almost all the way to the finish before you send them off to the Final Four.”

It seems like Erdahl gets emotionally invested, in a sense, in the players, teams and storylines she calls, but a challenge for her as a sideline reporter is that she’s only allotted a certain amount of time to convey or relay those feelings and her passion to the TV audience in her periodic updates.

“I think you can combat that by really cluing in your broadcast partners with what your stories are going to be,” she said. “Once you do the legwork of going and seeking the player out and trying to get additional information, it doesn’t do anybody any good to not really share what you were going to talk about on the air, because keeping stories to yourself is not, I don’t think, productive.”

Even though Erdahl didn’t have time to personally go on the air and give every anecdote she had on Kentucky star P.J. Washington, she was able to tell Eagle and Spanarkel her information so they could weave that information into the game broadcast. That process this year is aided by Erdahl having worked with the crew’s producer and director, Craig Silver and Suzanne Smith, during her time as a sideline reporter for the NFL and SEC.

“I think sharing everything you have with your play-by-play and your color analyst ensures that the whole story gets told on the air no matter who says the words,” Erdahl said.

It’s altogether a busy time for Erdahl, who is expecting a baby girl in July and is slowly preparing a move from Philadelphia to the Minneapolis-St. Paul area, where she’s from. She’s currently living with her parents while the moving process is ongoing, and while Erdahl is in town, she’s discussed with CBS and Turner about taking on some role for the Final Four, which will be in the Twin Cities next weekend.

“I’ve been spoiled the last two years with the Super Bowl and the Final Four,” Erdahl said. “I don’t know when this is will happen again, so I’m trying to take advantage of it.”

Erdahl will host CBS Sports Network’s primetime show “We Need To Talk” the Sunday of Final Four weekend and is working on a feature with a local player who may end up competing in the national semifinals, perhaps Kentucky’s Reid Travis, and integrating CBS’ Wally Szczerbiak, who spent six-and-a-half seasons with the Minnesota Timberwolves.

“We’ve been kicking around some ideas,” she said.

After the Final Four, Erdahl said she’ll host some NFL Draft preview shows for CBS Sports Network and call the Alliance of American Football championship game (if there is one) before taking a long break to move her family and spend time with her newborn child before beginning her second season as the SEC on CBS sideline reporter.

Erdahl admitted she didn’t really know what to expect upon switching from the NFL to the SEC last summer, saying she “was totally flying blind.” She knew the ins and outs of the well-oiled NFL on CBS machine but she adjusted fairly quickly despite being out of her comfort zone.

“I was still a little nervous from what that access was going to be like and having to re-connect with that 18-to-22-year-old athlete,” Erdahl said. “But I was so pleasantly surprised with just the eagerness and the willingness by the schools and the players to talk with me. I could not have been happier with the whole season.”

One big concern she had with her switch was having to build relationships with these college coaches and programs from scratch after developing and cultivating NFL sources over four seasons. But the fact that a lot of these college coaches watch the NFL on Sunday and recognized Erdahl because of that made the transition process a lot smoother.

“I feel like there was a recognition there that I had done NFL games when I went to go meet Kirby Smart or any of those guys,” Erdahl said. “So it was kind of hard to let those [NFL] partnerships go, but they also come back to play in a cool way.”

As Erdahl continues to be a part of CBS’ biggest college sports broadcasts, she reflected back on what she thought  she wanted to do with her career after she graduated from American University and moved to Boston to work for NESN.

“I wish I could go back and tell myself then that this is exactly what I want to be doing now,” she said. “I wouldn’t have wanted to get thrown right into a Sweet 16 or an SEC on CBS season. I think I’ve grown the right way in CBS’ eyes and in my own development to earn these opportunities. And it feels very validating to be able to do these bigger projects, bigger assignments with these great broadcasters.”

Erdahl definitely feels that her hard work over the last five years at CBS is paying dividends. While at the Super Bowl in February, she had a chance to catch up with her former colleagues in the Boston media and reflect on her time in the area.

“And these young females that are coming through there right now, it doesn’t feel like I’m that far off from where they are,” Erdahl said. “But in hindsight, it has been five years now and it feels like the right steps to kind of getting these bigger assignments. And I’m very grateful for that.”