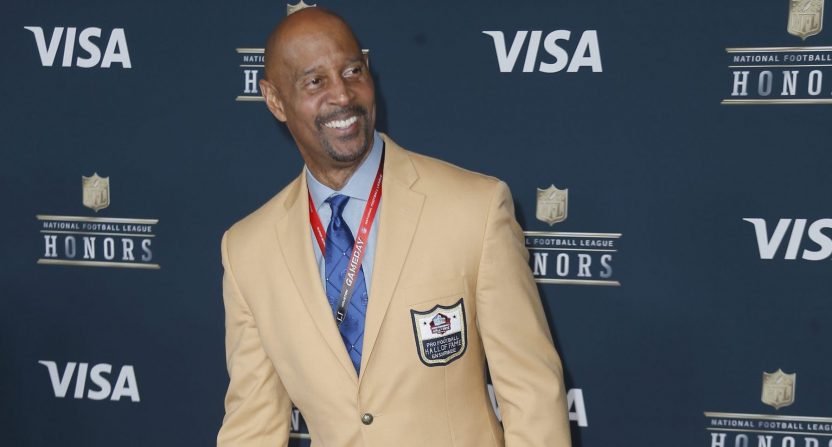 An offseason full of changes to NFL broadcast teams continued Wednesday, with announcements that James Lofton will join CBS as a game analyst and Tony Gonzalez, formerly of CBS, will jump to Fox to appear on the NFL Kickoff studio show.

Let’s start with Lofton, who played in the NFL from 1978 to 1993, making eight Pro Bowls as a wide receiver and earning a Hall of Fame induction in 2003. In recent years, Lofton has worked for Westwood One, calling NFL games on the radio.

CBS has room for Lofton after the explained departure of Solomon Wilcots, who had been with CBS since 2001 before announcing Tuesday that his time there was up. We don’t yet know whether Lofton will simply slide into Wilcots’ spot or whether CBS will shuffle the lineup further.

CBS has already undergone a fair amount of turnover this offseason, with Gonzalez leaving his role on NFL Today, Nate Burleson replacing Bart Scott on the same show, Phil Simms shifting from the booth to the studio and Tony Romo gaining Simms’ position as the top color commentator.

Just as the Lofton news broke Wednesday, Fox announced that it had hired Gonzalez as a studio analyst on NFL Kickoff, the Sunday-morning show that precedes Fox NFL Sunday. Though the new job is a bit of a step down from the former tight end’s old gig on CBS, it gives him an opportunity to work near his home in Southern California. When CBS announced in March that he was leaving the network, he issued this statement:

“I have had an incredible and rewarding three years at CBS and wish it could be more, but traveling to New York each week during the season is not what is best for my family at this time. While I hope to remain in broadcasting I will look to do so in the L.A. area. I can’t thank CBS enough for their support.”

Fox’s announcement did not indicate who will appear alongside Gonzalez on NFL Kickoff.

Though Fox has not had quite as much turnover as CBS, Gonzalez is the second high-profile former Pro Bowler to join the network this offseason, joining Jay Cutler, who will replace John Lynch as a color commentator.