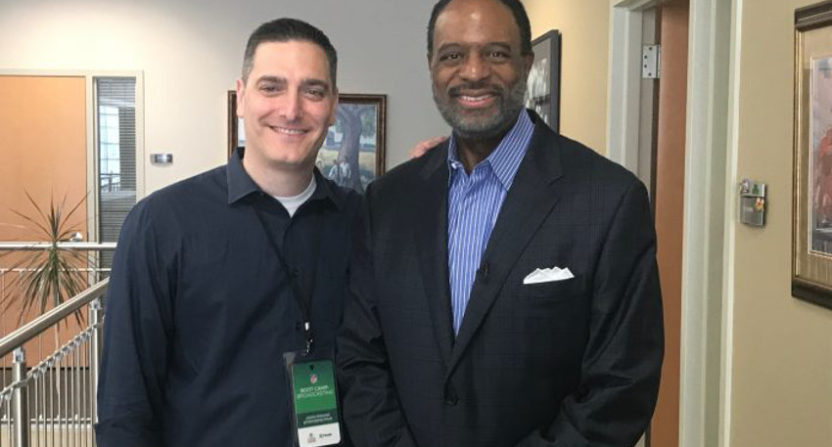 It appears viewers may see a very different-looking version of James Brown on CBS’ The NFL Today this fall. Brown recently went on the Sports Spectrum (a site focused on sports and Christianity) podcast with Jason Romano, a media consultant and former ESPN producer, and Romano tweeted the above photo of Brown looking rather svelte. Dan Steinberg of the D.C. Sports Bog listened to the podcast and transcribed the parts about Brown’s weight; there’s a lot of discussion of Brown’s faith, but also some interesting comments on how he lost these pounds (more than he’s ever lost in previous dieting attempts), and how he’s working to keep it off. For starters, Brown said Fox studio analyst Howie Long provided him with some key motivation:

“You know, I had been battling this for quite some time,” he told Romano. “I would always tease and say when I started doing football . . . [that] I really threw myself into the job. And Howie Long, my colleague at Fox, used to tease with a bunch of his buddies, asking, ‘Man, what line did he play on? I mean, he obviously played for somebody.’ So I was trying to look the part, until Howie told me I looked like a swollen tick. That was not a good compliment.

“Athletes, don’t they engage in — as much of an oxymoron as it is — they engage in negative incentive,” Brown said. “And I remember when I was working out — and I had been doing it religiously for a few years, trying to get down — and I came into the studio one Sunday and I was all excited because that week I had lost five pounds. Howie looked at me, he didn’t crack a smile, didn’t give me a vote of encouragement at all, he said ‘That’s like taking a cup of water out of the Atlantic Ocean. Talk to me when you’ve really lost some weight.’

This latest moment would qualify. Brown, a former basketball star at DeMatha and then Harvard, said he weighed 292 pounds in October, and is now about 218. The photo evidence is just as arresting as you’d expect.

“So I’m very excited about it,” he said. “And the principal reason also: I wanted to be, and want to be, a strong vessel for the Lord.”

Losing weight and keeping it off can be exceptionally difficult, and that certainly isn’t made any easier by the demands of a prominent broadcasting job like the hosting chair Brown has held on The NFL Today since 2006. (He previously hosted Fox NFL Sunday from 1994-2005, which may be where that anecdote about Long came from.) This is very impressive, and it’s cool to see that Brown has been able to achieve his goals here. The hour-long podcast itself also discusses Brown’s broadcasting career, covering hockey at Fox, leaving CBS for Fox and later returning, sports and race and more.