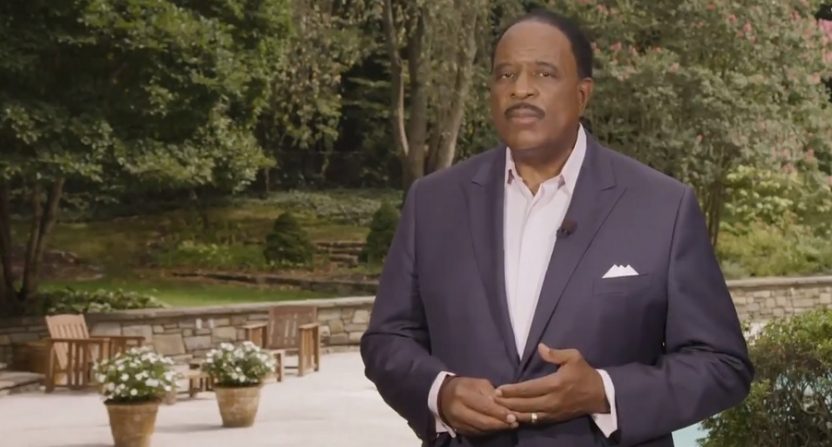 On Sunday of this Labor Day weekend, CBS is devoting five hours of programming to “Portraits In Black” from 1-6 p.m. Eastern, continuing the conversation on racism in sports and society.

Hosted by James Brown, there will be stories on Black athletes’ courage in the face of racism and injustice and two hours devoted to furthering dialogue on current events. Brown spoke with Awful Announcing on why Sunday is so important for himself personally, the network and why it’s so vital to have this kind of content on a national platform.

“Given what we’re going through in society right now, how divided our country is right now and how divisive the rhetoric is in the public square,” Brown said. “I’m just hoping that this will enable us to come together and that we’re able to sit down at a table, figuratively and literally, and have a conversation where we’re all listening and paying attention. To look our better selves to try to resolve what has been a persistent and unresolved problem in our country.”

The early programming will be about how sporting and societal accomplishments were achieved in the context of difficulties and challenges Black participants had to overcome. The first hour features Forward Progress, a documentary produced by Blake Berson about the integration of SEC football, featuring Nate Northington of the University of Kentucky, who became the first Black player to play in the conference on Sept. 30, 1967. The film features an in-depth interview with Northington and conversations with two of his Black teammates, former UK basketball coach Joe B. Hall and late NBA Hall of Famer Wes Unseld.

The Black 14, also produced by Berson, is the second hour of programming and looks at the 14 University of Wyoming football players who were immediately dismissed from the team in 1969 after head coach Lloyd Eaton learned they were going to peacefully protest in a game against BYU because of the Mormon Church’s ban on Black priests. Nationwide student protests followed. The show will feature interview with four of the living members of the Black 14.

CBS Sports will present an entire day of programming dedicated to continuing the conversation of racism in sports and honoring the stories and struggles of Black athletes.

The third hour of programming features Arthur Ashe and Althea Gibson, who broke the color barriers in men’s tennis and women’s golf, respectively, and how Gibson’s story has largely been untold. Along with interviews with Venus Williams, Billie Jean King, Ashe’s brother Johnnie, Gibson’s doubles partner Angela Buxton, Althea & Arthur will also delve into societal views on gender and athlete activism. Mike Stypulkoski is the producer.

“I think the way the programming is structured is that one hour builds upon another,” Brown said. “This problem has been around, we’ve heard people say it but you’ll see it, when you look at how far back it goes. We’ve made the effort to put it together and give you a nice historical buildup to even today to show that these are the same kinds of ills that we’ve dealt with. And then we move it to the present.”

At 4 Eastern, the programming pivots to the present day with a discussion on systemic racism, what it means to be Black in America today, and the progress that still needs to be made. Guests include Grant Hill, Lisa Leslie, Nate Burleson, Brandon Marshall, Swin Cash, Ian Eagle, Tracy Wolfson, Amanda Balionis, and Amy Trask.

The final hour is hosted by Brown, Michelle Miller, and Charles Davis, and not only looks at the Black Lives Matter movement through the eyes of athletes and coaches, but also includes a powerful interview Brown conducted with Tamika Palmer, the mother of Breonna Taylor. Brown said he couldn’t imagine the pain Palmer feels after losing her child, but he still vividly recalls her talking about how she doesn’t believe in destructiveness, looting or anarchy.

“She wants justice for her daughter, but she wants everything to be done the right way,” Brown said. “It was almost a mantra from the Civil Rights era, where Dr. King was the face of the Civil Rights movement, but advocated non-violence because the overarching aim was love. We can have legislation that may modify behavior, but it doesn’t necessarily change the heart. The heart is what needs to be changed, and we have to care for one another. It’s only when you have a relationship with somebody and see they’re just like you and we’re all to be in this supporting one another. Love is what undergirds significant change. And we’ve gotta embrace it that way.”

“This is not a dainty conversation. It’s not a delicate conversation,” Brown said. “This is a real conversation that’s going to involve pain and hurt, and we need to display patience and understanding of what it is so we know how to go about resolving it.”

What we’re going through as a country and as a society right now is far from new, Brown said, and he hopes that CBS is looking at itself in the mirror and seeing that he and the company are making sure they stay meaningfully involved in the conversation and play a role in moving the social needle forward as it relates to equality.

“It’s not just a societal problem that affects things in business or government or academia. It runs the entire spectrum, and we’re showing it through the lens of sports,” Brown said. “The issue will not be resolved unless it is all of us involved. And I pray that’s the message that comes through on Sunday. I hope I’m playing a meaningful role to be a part of this, to see that I’m not sitting back on the sideline and watching, that I’m actively involved.”

Again, the slate of programming will air on Sunday, September 6th on CBS.