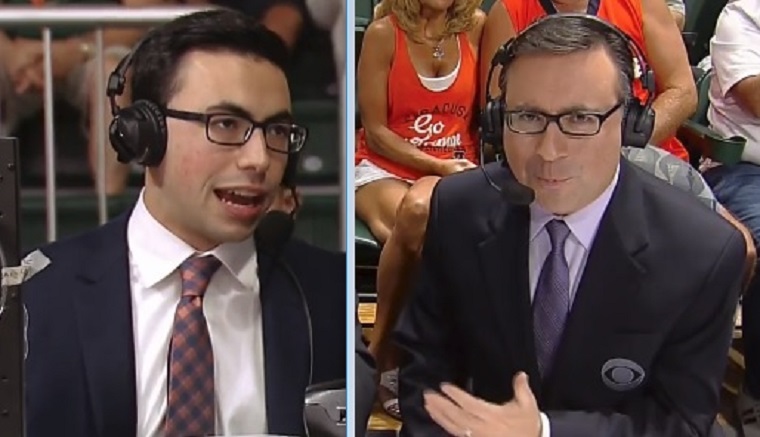 Saturday’s basketball game between Syracuse and Miami may not have been terribly important to the ACC standings, with the Orange’s 6-7 record putting them in 11th place and the Hurricanes at sixth with a 7-6 mark. But the matchup definitely has NCAA Tournament implications. The Comeback’s bracketologist, Jesse Kramer, currently has Miami as a No. 6 seed in the South region, while Syracuse is on the bubble as one of the last four teams in. The Orange’s 62-55 victory should help their chances.

But from a sports media standpoint, the most intriguing storyline at Miami’s Watsco Arena on Saturday centered on two of the game’s play-by-play announcers. For CBS, Ian Eagle was on the call with his regular analyst partner, Bill Raftery. And calling the game for Syracuse’s WAER-FM was Noah Eagle. The shared surname isn’t just a coincidence. Noah is a junior at Syracuse and is indeed the son of Ian.

First, check out a clip from the CBS telecast which showed Noah Eagle with broadcast partner Sam Rubinoff, as Raftery explained that viewers weren’t watching a clip from 1990. “It’s a father and son get-together,” said Raftery to Ian Eagle. “You gotta feel real good.”

“Oh, my goodness,” said Ian. “So much pride, but very surreal at the same time, Bill. It feels like a scene from Back to the Future and you’re Doc Brown.”

Indeed, how many of us go to work and see our son doing the same job — though maybe for a different company. We’ll let you know how it feels if we get to work on Tuesday and see one of our offspring writing for Awful Announcing. Or, like, The Big Lead or Deadspin. Give us a few days to cope with discovering that we have a son or daughter, however, and that he or she made the ill-advised decision to get into sportswriting. What kinds of parents are we?

But back to Ian and Noah Eagle, CBS ran the WAER feed midway through the first half so viewers could listen to the young Eagle call some play-by-play. Here’s a clip:

Would you have guessed you were listening to the CBS feed while Noah Eagle’s play-by-play was being broadcast. He’s got some pipes! But you would expect that, being the offspring of Ian Eagle, yes? Not to mention calling Syracuse basketball for WAER, where so many legendary and renowned broadcasters learned the trade. That is a formidable headset to fill.

Of course, one of the many broadcasters who did so was Noah’s father, Ian. Check out the photo from the wall at WAER, courtesy of Alisa Eagle (with a tip of the hat to Sports Illustrated‘s Richard Deitsch):

As reported by Deitsch, calling the Syracuse-Miami game on the road was Noah’s idea. The WAER wanted Noah to call an Orange road game this season and when the younger Eagle found out that his father would be working on the Syracuse-Miami broadcast, that’s the game he requested. As Noah pointed out, this might be the only time such an opportunity presents itself.

“It’s a once-in-a-lifetime experience I may never get to do again,” Noah said in a three-way call with his dad this week. “It’s something I’m looking forward to.”

“Off the record, I was pissed,” Ian said, deadpan. “I don’t want the public to see that Noah is actually two inches taller than me.”

There’s plenty more in Deitsch’s piece, including the Eagles’ plans for Saturday and the history of broadcasters whose children also go into the profession. It’s a fun read.