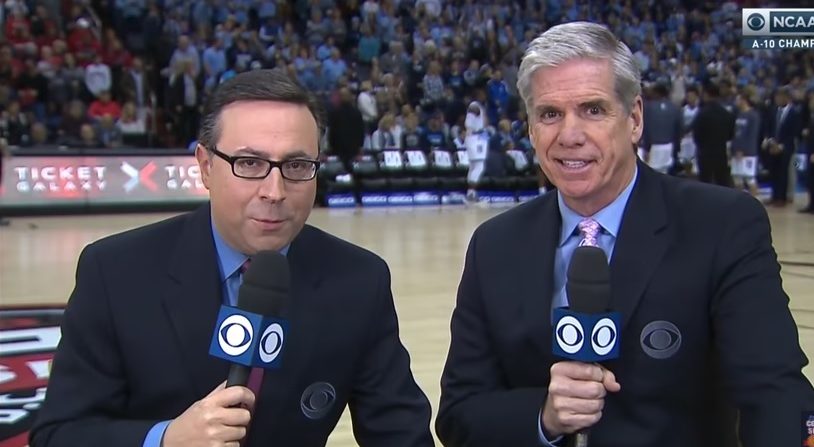 After 20 years of calling the first weekend of the NCAA Tournament on TV for CBS and Turner, Ian Eagle will call regional games for the first time Friday night on TBS alongside Jim Spanarkel and Allie LaForce.

In the east region in Boston, top seeded Villanova takes on West Virginia, followed by Purdue and Texas Tech in the rare chalk matchup in this year’s tournament. Eagle and Spanarkel spoke to Awful Announcing about their partnership and what it means for Eagle to finally get to call the Sweet 16 and Elite 8, though Eagle has been calling regional games on the radio for the last decade.

“I feel like it’s not something that I felt was a void in my career,” Eagle told Awful Announcing. “I was preparing for the regionals in doing the radio, and my mentality hasn’t changed. My regimen hasn’t changed on how I prepare. The only difference is there will be a camera and I’ll wear makeup.”

The fact that he wasn’t appointed overnight and he’s been doing it for two decades gives him direct insight into how to call these games.

“I truly appreciate the fact that I’m getting a chance to do it,” he said. “It just feels natural. It doesn’t feel any different preparing this week for something new. It doesn’t feel new.”

Eagle and Spanarkel both started calling NCAA Tournament games for CBS in 1998, and worked the first two rounds of every tournament until 2014, when Spanarkel joined Verne Lundquist’s crew.

“I’ve never heard of the guy you just mentioned,” Eagle sarcastically said about his longtime broadcast partner. “Let’s get this out of the way. First of all, it’s fun to say Spanarkel. It’s a fun name to say. I’ve probably said the name Spanarkel more than any other play-by-play announcer, just based on the fact that we’ve worked together for all of these years. And every time I say it, I smile inside.”

If you count college games and the NBA games they’ve worked together for the Brooklyn Nets on the YES Network, Spanarkel estimated that they’ve done at least 500 telecasts as a duo. There’s a sense of closeness and friendship that goes beyond just two people who happen to call games together, and that comes with a sense of comfort and trust for one another.

“The fact that we did our first tournaments together in 1998 without any knowledge of how to attack the job, we relied on one another for information, for preparation and, on the air, collaboration,” Eagle said. “I was Clyde Frazier for just a moment there. I don’t know how that happened.”

“We got the band back together again,” Spanarkel told Awful Announcing about calling the tournament together for the first time since 2014. “It was great that he got the opportunity to kind of move up and get the regionals.”

When asked about the chemistry the two have built over all those years, Spanarkel said it was “like almost riding a two-seater bike, because we both understand our distinct roles and separate roles.”

“We never feel like one person has to be the lead driver, if you will, at all times,” Spanarkel said. “We kind of share that and both understand our responsibilities.”

When one person is blocked and can’t see who committed a foul or some other important play, “generally I can feel that he’s not sure who committed the foul and I can react for him,” Spanarkel said. “And he does the same thing for me.”

Eagle and Spanarkel are also known for their witty back-and-forth on the air, trying to keep things light while also coherently calling the action on the court and offering interesting insight and analysis for the viewing audience.

“What we try to do is have fun with it whenever we can without overdoing it, but at the same time I would say that we try to keep it light,” Spanarkel said.

It’s that balance of seriousness and humor that earned Eagle, Spanarkel and LaForce college basketball’s most prestigious honor. In Awful Announcing’s 2018 NCAA Tournament broadcaster rankings of the CBS and Turner crews, the trio earned our top rating from over 10,000 reader votes.

Eagle was asked where it ranked among his biggest career accomplishments.

“Yeah. It’s right up there,” he said. “First of all I’d like to thank the Academy, but I’m so pleased that our entire group performed the way they did. They had an outstanding weekend of telecasts. But I think you take all of this with a grain of salt, and you understand that the goal is to go out and do the best job possible. And the hope is that people enjoy it. When those two worlds meet, then you feel like it was a successful weekend.”