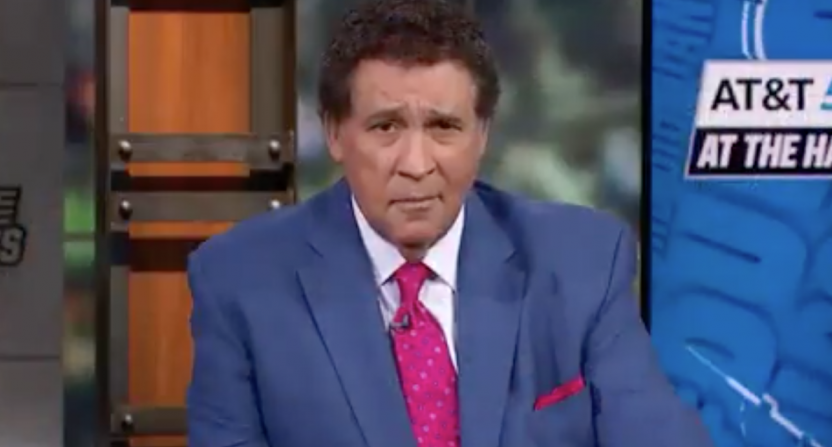 During CBS’s March Madness coverage this year, analysts Clark Kellogg, Wally Szczerbiak, and Seth Davis caused a TV and social media stir by dancing behind six animated figures representing six teams that had advanced to the Sweet 16 at that point.

The lack of choreography was probably obscured by those animated figures. But even if Kellogg, Szczerbiak, and Davis had been in full view, the entire scene would still have been enjoyable.

The crew surely needed to unwind after being stuck in a studio all day watching NCAA Tournament games. But the dancing (along with the crew laughing and snickering in the background) also demonstrated how much fun everyone involved has during March Madness.

And then give Greg Gumbel his own wing for his reaction! pic.twitter.com/oJo1OQBlBn

Punctuating the moment, however, was Greg Gumbel’s reaction when the camera went to him. Like most of the viewing audience, the host couldn’t believe what he was seeing. And maybe, even in good fun, he was wondering what they were all doing to the state of sports television in the year 2021.

Gumbel was asked about that reaction to close out an interview with Jon Zaghloul on Sports Talk Chicago/WCKG and his explanation was the verbal version of the look he gave on screen.

“I have tried very hard throughout my career not to look like an idiot on TV.”

Greg Gumbel to ⁦@JonZSports⁩ on why he didn’t join Clark Kellogg and Wally Szczerbiak in dancing on TV during NCAA Tournament coverage: pic.twitter.com/AFH8GEhXac

“I have tried really hard throughout my career not to look like an idiot on TV,” Gumbel said with a laugh. “I have tried very hard not to embarrass my loved ones, my friends, and myself. And I’m not going to [dance on TV]. But at the same time, I wasn’t going to let them get away without being poked about it. So that’s why I did what I did.”

Lest you think Gumbel is a grump, he did clarify, “It was fun. I will only go so far.”

Zaghloul also talked to the CBS NFL analyst about his past working relationship with Bruce Arians, who won the Super Bowl last season coaching the Tampa Bay Buccaneers. Arians was part of a three-man booth with Gumbel and fellow analyst Trent Green during the 2018 season.

As Gumbel explained, the coach wasn’t quite a natural in his only season broadcasting, though he surely would’ve improved in seasons to come.

“I think he could’ve been OK if he had given it more of a shot than one season,” Gumbel said. “The tough thing about someone coming in who has never done it before is that they’ve never done it before. And it’s one of those things that I’m very happy to say, I’ve seen people come into the business and they find out that it isn’t as easy as we often make it sound.”

Gumbel’s entire conversation with Zaghloul is worth listening to. The veteran broadcaster was candid and got pretty salty when talking about his problems with the current state of baseball, a sport he loves yet finds difficult to watch these days. He’s also apparently not a fan of soccer and golf, either. The guess is that Gumbel likes his sports to have a bit more action.

You can listen to the Sports Talk Chicago podcast at the show’s website or on Apple Podcasts, Spotify, and your preferred podcast app.