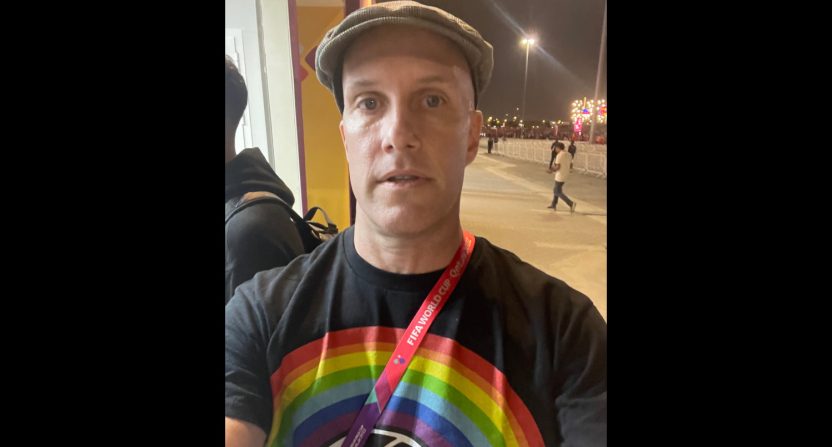 This is an ongoing story and could be updated as further news breaks.

Grant Wahl, an American reporter who was in Qatar reporting on the World Cup for CBS Sports and his own Substack newsletter, has died.

The news was confirmed by NPR.

USA Soccer also released a statement on the tragic news.

U.S. Soccer Statement On The Passing Of Grant Wahl: pic.twitter.com/CBp1mCK1mQ

The NPR article on his death shared more details on his passing:

“As the match was winding down, NPR correspondent Tom Goldman witnessed a commotion in the press tribune at Lusail Stadium. Reporters scattered as Wahl collapsed. Paramedics responded to the seating area where he was and performed CPR. After many minutes, they took him away on a stretcher while using an automatic chest compressor to continue applying CPR.”

Wahl was detained at the World Cup in November for wearing a rainbow shirt in support of gay soccer fans and specifically his brother, Eric, who is gay.

Free to read: What happened when Qatar World Cup security detained me for 25 minutes for wearing a t-shirt supporting LGBTQ rights, forcibly took my phone and angrily demanded that I remove my t-shirt to enter the stadium. (I refused.) Story: https://t.co/JKpXXETDkH pic.twitter.com/HEjr0xzxU5

Eric shared the news of his brother’s passing in a since deleted post on Instagram. The caption said, “We’re still trying to find out. He collapsed at the stadium, was given CPR, was taken by Uber to hospital and died according to Celine. We just spoke with the state department and Celine has spoken to Ron Klain and the White House.”

In the video, Eric shared that he felt his brother was murdered.

The timeline of events would have Wahl passing during Argentina’s quarterfinal win over the Netherlands, which he was tweeting during. His final tweet referenced the game-tying goal, scored by the Netherlands late in regulation, which sent the game into extra time.

Just an incredible designed set-piece goal by the Netherlands.

His final article, which was published on Substack, dealt with the poor working conditions for laborers at the World Cup.

Wahl had been feeling sick. On his Podcast, Futbol with Grant Wahl, he shared (H/T, Jessie Young, CNN.com) that “It had gotten pretty bad in terms of like the tightness in my chest, tightness, pressure. Feeling pretty hairy, bad.”

Young also noted that Wahl “further described the incident in a recent newsletter published on December 5, writing that his body had ‘broke down’ after he had little sleep, high stress and a heavy workload. He’d had a cold for 10 days, which “turned into something more severe,” he wrote, adding that he felt better after receiving antibiotics and catching up on sleep.”

Shortly after the news broke, John Berman spoke on CNN. And despite Wahl not feeling well, Berman indicated that nothing that was happening would indicate that the illness was life threatening.

John Berman details recent conversations with Grant Wahl in the days leading up to his passing. pic.twitter.com/3KeIRulAMN

Wahl was 49 at the time of his passing.