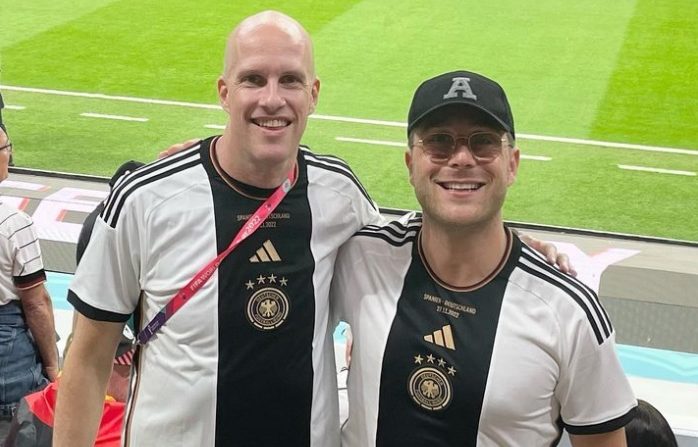 American reporter Grant Wahl, who was in Qatar covering the World Cup for CBS Sports, died during the game between Argentina and the Netherlands. News of his passing broke on Friday night in the United States.

Wahl was detained at the World Cup as he was covering a match between the United States and Wales in November. He was detained for wearing a shirt in support of gay rights. Wahl later reported that he was ok and released, while still wearing the shirt.

I’m OK, but that was an unnecessary ordeal. Am in the media center, still wearing my shirt. Was detained for nearly half an hour. Go gays ? https://t.co/S3INBoCz89

The soccer world expressed its heartbreak in the aftermath of Wahl’s death.

Sports illustrated fired him for challenging their pay cuts during the pandemic.

He ran to unseat FIFA’s president.

RIP Grant Wahl, who’s career was as much about great reporting as it was about speaking truth to abusive power.

Grant Wahl was kind. Needlessly kind. I love him and I’ll miss him.

He treated me with a level of respect I didn’t deserve. He gave me an opportunity when I needed one. And most importantly he was kind. Needlessly kind

We are shocked, saddened and heartbroken over the tragic passing of Grant Wahl. He was a kind and caring person whose passion for soccer and dedication to journalism were immeasurable. pic.twitter.com/ohJoZlGfk0

Generous of spirit, a peerless journalist, #grantwahl did more to inform and explain and celebrate the beautiful game than any other American. Ever. Full stop. His loss is incalculable to our profession. Prayers for his family.

Learned of Grant Wahl’s passing while I was at the Sixers game. Completely shocked. My heart goes out to his wife, family, friends and the soccer community. Truly heartbreaking.

Grant Wahl was my friend and was one of the most generous, kind, and encouraging people I knew in or out of sports media. He was such a bright presence; I never talked to him without feeling a little better about the world afterward. This is crushing. https://t.co/PexnfvmZbC

Numb. Shocked. Devastated to hear the news about Grant Wahl. The world lost a kind human being. Met Grant as a young reporter and later had the pleasure of working with him last WC. He loved people, life and our sport. May your soul rest in peace Grant. ??

This news of Grant Wahl passing feels surreal!! There needs to be a thorough investigation into what happened. Absolutely stunning.

Wahl’s wife, Céline Gounder, took to Twitter to thank everyone for their best wishes in the aftermath of this tragedy.

“I am so thankful for the support of my husband @GrantWahl ‘s soccer family & of so many friends who’ve reached out tonight,” she said. “I’m in complete shock.”

I am so thankful for the support of my husband @GrantWahl's soccer family & of so many friends who've reached out tonight.

Wahl had recently turned 48. John Berman went on CNN and detailed that while Wahl had been sick, the illness did not seem like it was likely to threaten the life of an otherwise healthy 48-year-old man.

John Berman details recent conversations with Grant Wahl in the days leading up to his passing. pic.twitter.com/3KeIRulAMN

He had also recently been critical of the working conditions in Qatar in what ended up being the final article posted before his passing.