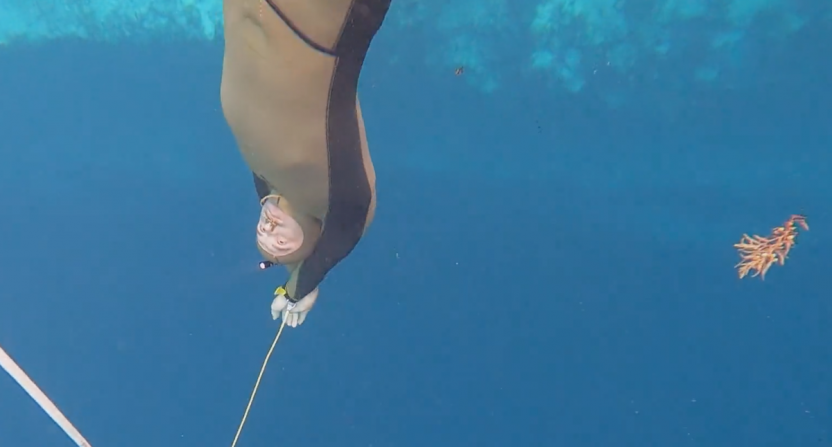 If you took a break from TV between the end of Sunday’s 4:25 p.m. ET NFL games and Sunday Night Football, perhaps you missed a compelling 60 Minutes feature on free diver Alexey Molchanov and his attempt to break the one of four world records that he doesn’t hold in the sport.

And if you’re not familiar with free diving, Sharyn Alfonsi’s report is worth watching just to see what a feat of human endurance it is. Competitors (or enthusiasts, presumably) dive deep underwater, going straight down with no scuba gear and adjusting their breathing according to the changes in pressure as they descend below and then ascend back to the surface.

How deep do these divers go? Those looking to set world records go more than four stories below the surface, requiring them to hold a single breath for nearly five minutes as the size of their lungs literally change. Blacking out is a very real possibility. Upon coming back to the surface, divers need to prove that they’re lucid for the feat to be considered official.

The full report can be seen at the 60 Minutes website, but CBS News did post footage of Molchanov’s full, record-setting dive online. Give it a look:

“I enjoy finding new boundaries and pushing them further because I know I can,” Molchanov told Alfonsi. “I know through all these years and like thousands of hours of training and diving how well I can use my oxygen, how slowly I can use it and how efficient is my technique.”

That technique is everything. Researchers believe Molchanov, 34, takes about two gallons of air into his lungs before he submerges. Nicknamed “The Machine” by fellow divers, he has trained himself to move air between his mouth and sinuses to equalize the pressure in his body and prevent his ears from rupturing.

According to Alfonsi’s report, approximately 60 recreational free divers die per year. Not just because they black out due to poor breathing techniques and lack of oxygen, but because many of them dive alone. Official competitions are extremely supervised with safety divers alongside the competitors, constant monitoring, and doctors on hand, in addition to fellow divers and spectators.

Molchanov knows the dangers of free diving all too well, losing his mother while she was teaching free diving off the coast of Spain. Her body was never found. Yet if not for the techniques she taught him, Molchanov likely wouldn’t have achieved all he has in this utterly challenging endeavor.

“It feels very much like flying actually,” said Molchanov. “Very much like freedom. Just pure joy of flying, like staying and feeling no urge to breathe.”