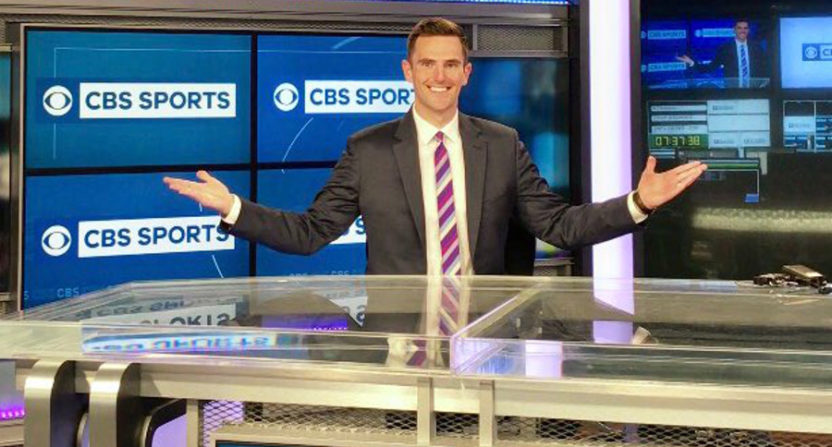 Many of those caught up in ESPN’s April layoffs of over 100 people have found other notable jobs, and Chris Hassel is one of the latest. Hassel was in his fifth year as an ESPN anchor when he was laid off earlier this year. He’s since found work as a play-by-play announcer for streaming service Stadium, and while he’ll continue that, he also announced Thursday that he’s landed at CBS as an anchor:

I have a new home! Thrilled and honored to be a part of the prestigious @CBSSports family. Details in the coming weeks… pic.twitter.com/0CesXhthTB

Hassel, an Iowa native who graduated from Davenport, Iowa’s St. Ambrose University, headed to ESPN in 2013 after working for Des Moines’ WHO-TV from 2007-2012. (Before that, he won a contest to call a game on the Iowa Hawkeyes’ radio network in 2005, and did weekend sportscasts for the Quad Cities’ Fox affiliate and worked at Davenport’s WOC-AM.) He told his hometown Muscatine Journal back in 2013 that ESPN was one of the very few places he was willing to leave for:

“It had to be an unbelievable opportunity to consider leaving Channel 13 and Des Moines,” Chris said.

“Unless it was big, we weren’t leaving.”

…Once Chris heard the voice mail, he knew exactly what it meant. He spent a few moments pondering what he was likely going to hear from [agent Josh] Santry.

“I laid in bed 15 minutes reflecting on it. I was stunned,” Chris said. “I called Josh back and he said ‘Chris, you’re going to ESPN.’ I was just at a loss for words.”

What started as a dream, was becoming larger than he ever envisioned.

“I thought I could do something special with this career, but I didn’t think it would happen. It was one in a million,” Chris said.

Hassel did some impressive work at ESPN, working on SportsCenter, ESPNews’ Highlight Express, ESPN Goal Line and more. And he received a large outpouring of support when he was laid off, especially from those with Iowa ties. It’s unfortunate that his time at ESPN ended that way, but it sounds like he’s found some pretty good jobs now between CBS and Stadium. We’ll see what he does over at The Eye; maybe he’ll be involved with their new 24/7 sports news streaming channel? In any case, he’ll be worth keeping an eye on.