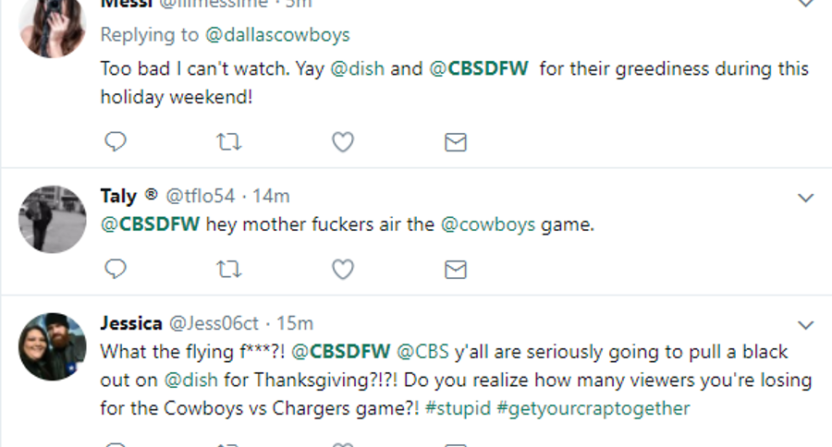 The people manning social media accounts for Dish and CBS aren’t having a happy Thanksgiving, as they’re having to deal with a whole lot of complaints from those missing the Dallas Cowboys-Los Angeles Chargers game. The carriage dispute that’s seen CBS pull their broadcast affiliates off Dish in 14 major markets, including both Dallas-Fort Worth and Los Angeles, has carried on into the game, affecting an estimated three million customers. (CW affiliates have been pulled in many markets too, and CBS cable networks, including CBS Sports Network, have been pulled nationwide, but it’s the broadcast network that’s the biggest deal here.) And that’s led to a whole lot of angry tweets at Dish, and some at CBS and some of the affiliates involved:

Get it together @dish ? Cowboys Thanksgiving game on @CBS is a tradition and you guys are on the verge of loosing my loyalty

So is @dish and @CBS going to resolve their issue by tomorrow. My parents have dish and if I have to miss the Cowboys because of two companies being petty, I'm gonna be pissed

This is stressing me out if I dont get to watch the #Cowboys. And if I dont get to see #BlueBloods then Im gonna be flat out PISSED!! ?? @CBS @dish Yall gotta do something now! I pay to much money for this petty crap! https://t.co/Et8WrTCJUX

@CBS @dish YALL RUINING MY FAMILIES THANKSGIVING. THIS IS YEARS OF TRADITION. WHERES MY COWBOYS GAME

What the flying f***?! @CBSDFW @CBS y'all are seriously going to pull a black out on @dish for Thanksgiving?!?! Do you realize how many viewers you're losing for the Cowboys vs Chargers game?! #stupid #getyourcraptogether

Aye fuck you @dish I can’t watch the cowboys play on @CBS I hope you all choke on a turkey dick. Y’all getting dropped ✌?

@dish and @CBSDFW need to get it figured out. @CBSDFW trying to rip people off!

@dish thanks for ruining Thanksgiving by not keeping @CBSDFW – thankful for @Apple TV for saving the day!

Over at the official support Dish Answers account, they’re blaming CBS’ demands and telling customers to call CBS to complain:

Good afternoon, Jennifer. I understand missing your channels can be frustrating. We are working to get the channels back as soon as possible, as well as keep our prices as low as possible for our valued customers. At this time, They're demanding an unre… https://t.co/vvlX9KnnDz

The channel owner chose to impact customers and take away programming. Contact your local station manager, ad sales department or newsroom and let them know that you support DISH. Demand that they end this dispute and get your station back on the air. D… https://t.co/Q36W97urFL

Tony we will continue to work to get the channel(s) back for our customers! Please visit our website: https://t.co/LvsjnlZlXU. This website provides the same information and updates that our representatives would share and allows you to leave feedback for our executive team. -MH

There are some options for those affected, including using a digital antenna or signing up for a free trial of streaming service CBS All-Access. But that isn’t going to work for everyone. And this dispute has messed up Thanksgiving plans for many, and that’s only going to lead to further vitriol. Good luck to those who have to read all the angry replies here; they may not have a whole lot to give thanks for today.