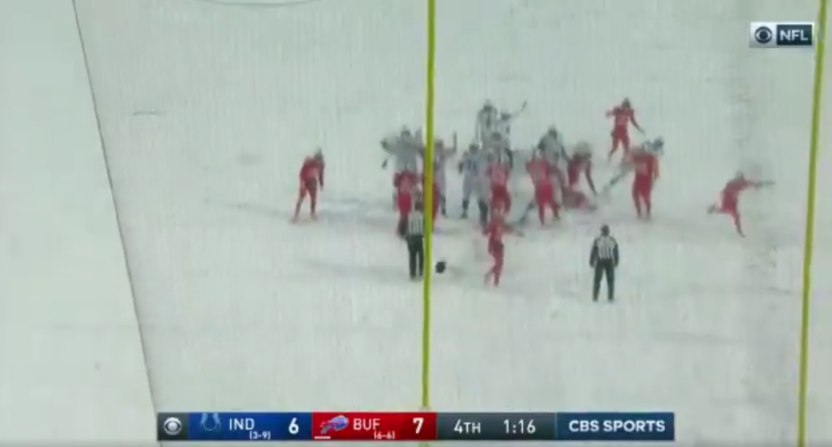 Sunday’s snow-filled Indianapolis Colts-Buffalo Bills game created plenty of issues for the CBS broadcast as well as the players on the field, and the weather wound up having some of the largest impacts seen on a broadcast. (Which is remarkable, considering that just this year we saw a game have to shift to Skycam angles thanks to fog, which then wound up spawning a trend.) Director Jim Cornell and sideline reporter Steve Tasker both spoke to Sports Illustrated‘s Richard Deitsch afterwards, and both described the game as some of the worst conditions they had ever seen:

“It was worse than what you saw on television,” Cornell said. “I directed another snow game, but nothing like this where you could not see a yard marker.”

… “The cameramen were having trouble getting a reference to where the players were on the field because there was no reference,” said Cornell, who has directed NFL football for 10 years. “It was just white.”

…Tasker worked a snowy Bills-Browns game a few years ago in Cleveland which he said was very bad, but he called Sunday’s conditions much worse because it snowed throughout the entire game, and with different kinds of snow. “Small wet snow, then big white fluffy snow, then windy sideways snow; it just never let up,” Tasker said.  “…It was once in a lifetime conditions.”

That’s a big statement given Tasker was a Bills player for 11 years and has lived in the Buffalo community since 1986. “I have never seen the franchise play a game in these conditions,” Tasker said.

The amount of snow and the way it kept continually falling throughout was remarkable, as was the challenges that posed for visibility for the announcers and camera angles for the broadcast. Deitsch’s piece goes into more detail about the different camera angles used during the broadcast and how announcers Spero Dedes and Adam Archuleta called the game primarily off monitors thanks to the lack of visibility from the booth.

But beyond the challenges, the snow actually made for some very cool and unique shots, such as the lead-up to Adam Vinatieri’s 43-yard game-tying extra point in the final minutes (which saw Vinatieri and his teammates frantically trying to clear a patch of grass to kick from) and the kick itself, which started wide and hooked back through the goalposts.

Man I am crying pic.twitter.com/ciVxTErp7X

It’s impressive that the CBS cameramen were so on top of this, especially with it coming in the final minutes of a game where they were exposed to the elements all day. But the broadcast team did a heck of a job of covering that kick, and creating a memorable highlight despite the historically-bad conditions. This may have been one of the hardest games to shoot this season, but they got it done, and in fine style.