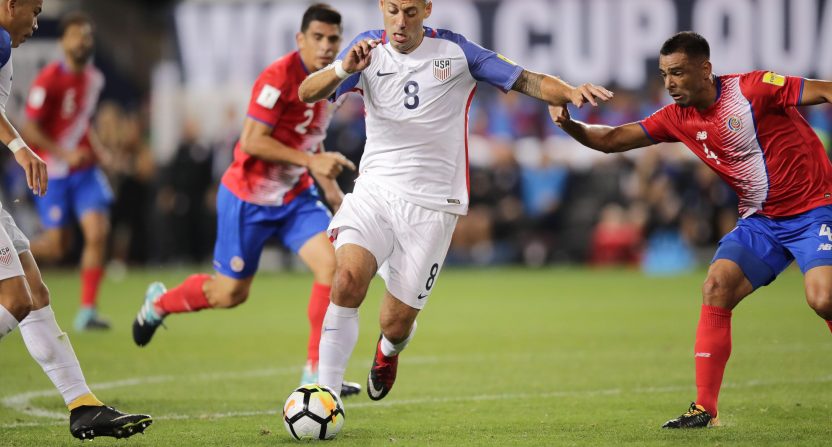 On Monday, CBS Sports announced their broadcasters for the Concacaf Nations League, and perhaps the most surprising name is former USMNT star Clint Dempsey.

Dempsey will work in the studio for the Nations League, which run from June 3rd-6th. The ever present Kate Abdo will work as the CBS studio host for the Nations League, with Dempsey, Charlie Davies, and Oguchi Onyewu working as analysts. Janelly Farias will also contribute to the studio show (dubbed Concacaf Today), which will air from Denver’s Empower Field at Mile High (which is hosting the four games of the Finals).

For the matches themselves, Andres Cordero and Maurice Edu will call Thursday’s Honduras-US match, while Adrian Garcia-Marquez and Marcelo Balboa are set to call Mexico-Costa Rica later that evening. Nico Cantor and Jenny Chiu will work on the sidelines for both matches.

Adding Dempsey to their roster of broadcasters seems like a coup, and we’re curious about how he’ll do. Yes, it’s something of a star-centric approach, but sometimes, that can work out just fine for a network.

It’s a little disappointing that two of the four matches will be streaming only and the other two will be streaming and cable (as opposed to broadcast), but hey, baby steps. I also do appreciate the fact that the two cable games aren’t cable-exclusive. That can help a lot when deciding whether or not to buy a streaming service subscription. CBS has put together a strong talent roster for this weekend of matches, and it will be their turn to shine domestically on an MLS-free weekend.