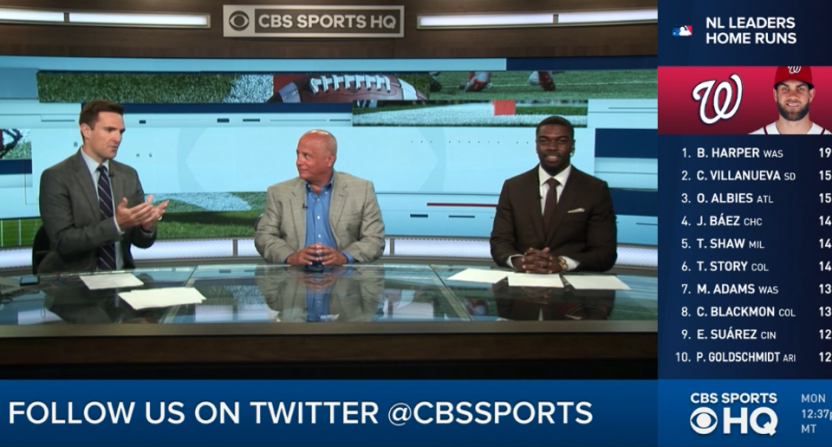 It’s been quite the year for Chris Hassel. Hassel was one of the over 100 people laid off by ESPN last April, but it’s turned into some new opportunities for him. He found some play-by-play work with Stadium, and then joined CBS Sports in October as an anchor for the then-upcoming CBS Sports HQ free streaming sports news channel (which officially launched in late February) and as a play-by-play voice for some CBS Sports Network games (in addition to his Stadium work). Hassel is now an anchor on CBS Sports HQ’s daily coverage in the afternoons (he works the noon to 4 p.m. Eastern slot Monday through Thursday), and he’s then able to call games on the weekends. He spoke to Awful Announcing recently, and said he’s thrilled with what he’s doing now.

“Things are going great,” Hassel said. “I couldn’t have asked for a better position to be in. Looking back on things, everything worked out beautifully for me. The only difference is that I’m able to do more of what I like to do. I moved down to Fort Lauderdale from Connecticut, I work with a bunch of great people, innovative people, people that knew that they were doing something for the first time. And everyone believed in it.”

Hassel said that belief has been particularly inspiring.

He also appreciates that this role is more flexible than what he was doing at ESPN, especially when it comes to giving him the ability to call games on the weekend.

“This is my full-time job, my main job. I do four days a week, and that was one of the cool things about kind of hitting the reset button on my career when I was let go by ESPN, the ability to find the perfect spot, and the willingness that the folks at CBS and CBSi had to allow me to do a four-day week where on the weekends I can call games if I want.”

“And it has no impact on my studio job Monday to Thursday if I have a game on Saturday with Stadium or CBS Sports Network. That’s fine with them, and that’s what’s been great about it for me. I want to call games as well, and it’s just something I was not able to do at ESPN with my SportsCenter obligations. I’m planning on doing more college football and college basketball for Stadium and CBS Sports Network.”

While CBS Sports HQ has only been up and running for a few months, and only in active rehearsals for a few months before that, Hassel said it’s surpassed all of his expectations.

“It’s been great. It’s been better than I could have even expected. When I first came down here on my audition, it was such a smaller operation, I couldn’t really picture how exactly we were going to get things done. And even when I started, which was Oct. 1 or so, a lot of things had to happen for us to get off the ground.”

He attributes some of that to the daily dress rehearsals they did pre-launch, ensuring a smooth product when they did start putting their product out there.

“We had dress rehearsals, which was basically every day from Oct. 1 when I started through when we launched in late February. So we were doing it like it was being put out there, but it was only available in-house. …And absolutely, it helped. I know that they had experience in getting stuff off and running because what CBSi did with [similar news streaming service] CBSN, which they also had weeks and months of rehearsals for.”

“That went well, so that was kind of what we were going off of, the gameplan that our leaders looked at and said ‘This is the blueprint right here. You do rehearsals, you do it like it’s live,’ and we did. When we first started doing it, it was ‘Let’s do one block, 15 minutes, and let’s do that for a couple weeks, get to a point where we can easily do that production-wise. Then we’ll add a second block, then we’ll add a third block.’ So it took a few weeks, maybe a couple of months until we got up to a full hour, and then we just started doing the full hour like it was a show that was going out there.”

Hassel said while the show wasn’t airing to the public, it was going to key CBS executives. Thus, the pressure to perform was there already, and that helped make it a smooth transition when the switch was flipped in February.

“We knew that it was going to the offices of [CBS CEO Les] Moonves and others on a daily basis, so even though my parents couldn’t see it, we knew that important people were watching. So that really helped out, because when we launched, it was just like any other day. It was cool, we knew what was going on, we it was a big day, but we really didn’t have to do anything different.”

What exactly should viewers expect from CBS Sports HQ’s shows? Well, Hassel’s a veteran of ESPN’s SportsCenter, and he said some of the DNA is the same, but CBS’ focus is much more appealing to him than some of the SportsCenter stuff he was asked to do.

“There are pieces of it that are very similar. I started out at ESPN doing Highlight Express, which was a half-hour show that was basically just highlights and soundbites, and then moved on to SportsCenter. I think [CBS Sports HQ] does have similarities to SportsCenter, but in my opinion, it’s like all the good parts of SportsCenter, the highlights, the in-depth highlights, the soundbites, the stats, the analysis, and it doesn’t have some of the stuff that I didn’t really like about the way things had kind of transpired over the years, which was maybe more filler, less highlights, less analysis and more opinion.”

“There’s less opinion, there’s less shouting, it’s more for the sports fan that just wants to get information and doesn’t want to be told how it is, the facts, the stats. Sure, we’ll put it into perspective, and we’ll have analysts come on and say some things that maybe some won’t agree with, but it is kind of what, I think, SportsCenter was back in the day a little bit more, where it’s highlight-driven, highlight and coming right from the source, which is the players, the coaches, and the stats that we can compile, throw some numbers at you like the back of a baseball card, I think that’s how many of us kind of grew up and fell in love with sports. And it’s just not as much chitchatting or making something out of nothing.”

Hassel said CBS Sports HQ also has a good group of analysts they can call upon.

“We’re really strong in analysts. We’re not super deep, but we don’t need to be the way things are set up. We have really good analysts and I think that’s something people who watch are maybe surprised by. Guys like Danny Kanell who came from ESPN as well, and there are many others, and over the months and years, I think there will be some new stars that are born. And some who were already there, like Brady Quinn; he was already in place doing stuff for CBS Sports Digital for years, but now he’s able to be showcased on CBS Sports HQ along with his other stuff, when he, like Danny, isn’t calling games.”

Another different element is how they incorporate fantasy information and betting odds. That may be a wider focus for many networks in the days ahead, but Hassel said it’s already a priority for CBS Sports HQ, especially given their connections to Sportsline (which CBS bought back in 2004, and which has featured in a lot of CBS’ digital ventures since then).

“We incorporate fantasy and gambling into each hour. That’s another thing that really sets it apart from a typical SportsCenter type program. We have a bevy of Sportsline experts (some of them former oddsmakers in Vegas) on with us most hours to give free picks on lines, over/unders, and props from the biggest game(s) of the night. It’s something HQ offers that is normally behind a Sportsline pay wall.”

CBS Sports HQ has been on the air for over three months now, but Hassel said while the sports they’re covering have changed, the show’s approach has remained relatively consistent.

“There are tweaks here and there, but for the most part, we’ve kind of stuck with the core of what we went into it with. We haven’t changed philosophy or anything major. I think that if you were going to put on even a rehearsal that we would have done in December, it wouldn’t look that much different than what we’re doing now, other than we can do it more streamlined, we can do it quicker and a little bit better, and the sports are different.”

“Back then it was all football and basketball, now we’ve transitioned into NBA playoffs, NHL playoffs, golf and obviously baseball. So I don’t think a lot has changed; it’s gotten a little easier workflow-wise and with new technology that continues to be implemented, because it was a total startup. And I think you’re going to see a lot more of that in the coming months as well.”

The show is delivered as a streaming product rather than a linear TV one, but Hassel said while that has some advantages for both production and for ease of watching from anywhere, he thinks what they’re doing is still pretty similar to linear TV (and that the distinction doesn’t matter as much these days).

“The way they set it up with what’s called an hour-long wheel, it’s easier to break in and update when there’s news or when a game ends and a new highlight comes in, but I think we’re talking to kind of the same kind of people, talking in the same way. It doesn’t matter any more. Everything’s so intertwined these days with the way people watch. Even though it is streaming, a lot of people are putting it on their TV and watching it just like you’d watch something else, it’s just also that they have the ability to watch it on their laptop or their phone.”

Hassel said there is one crucial advantage for CBS Sports HQ’s streaming setup, though; anyone can watch it as long as they have an internet connection, with no cable subscription required. In a world of increasing cord-cutting and subscriber losses for sports networks, he sees that as a selling point.