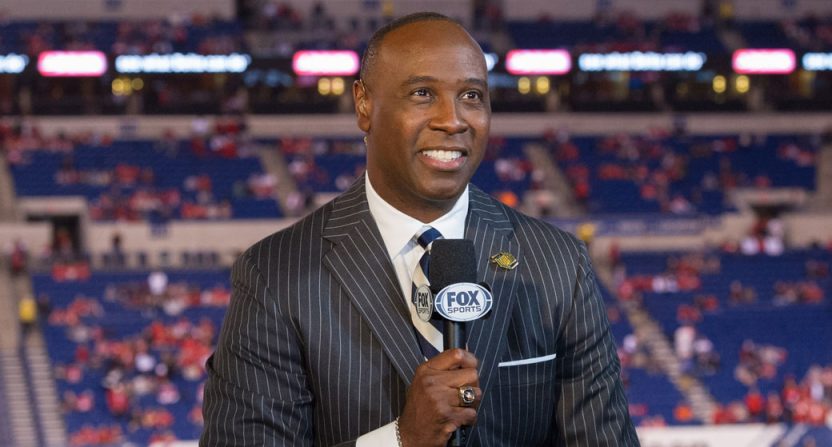 From calling college football BCS title games with Thom Brennaman, the first-ever Big Ten and Pac 12 championship games with Gus Johnson and the NFL with Dick Stockton, Brennaman and finally Kevin Burkhardt, the 55-year-old Davis accomplished a lot during his tenure at Fox before moving to CBS earlier this year.

“Couldn’t ask for a heck of a lot more,” Davis told Awful Announcing over the phone from his Orlando home. “But my contract was up, and there was interest from CBS Sports. And when it was all said and done, that seemed to be the right place for me to be.”

Davis had worked on Fox’s number two team with Burkhardt and Pam Oliver for the last four seasons, and leaving them will be especially tough for him.

“Obviously, if you spend 14 years at a place,” Davis said, “you don’t just pick up and walk out and go ‘see ya!’ It’s not like an immediate rear view. It’s gonna be tough. A lot of great people. A lot of great memories.”

After working with Johnson on college football from 2011-2014, Davis spent two seasons calling the NFL with Brennaman and Tony Siragusa before being moved up in 2017. But Davis wasn’t supposed to be the only analyst in the booth on that crew, as Fox made the splashy announcement that Jay Cutler would be retiring and going into broadcasting. Davis said he knew exactly what the situation was.

“They wanted to give Jay some support,” he said. “Let’s be honest about it. If Jay did pretty well, I’d be moving on somewhere else and he would’ve stayed as the number two guy. That’s why they hired him. I was hired to be a good teammate. Cool. I’ll be a great teammate. And then he never got there [laughs].”

Cutler spurned Fox to sign with the Miami Dolphins. After that didn’t exactly work out, Cutler spent some time as a reality TV star, and Fox kept Davis as the lone analyst alongside Burkhardt and he had a blast doing it.

But Davis did end up giving a different player some support during that 2017 season. On his bye week, Carolina Panthers tight end Greg Olsen joined Burkhardt, Davis and Oliver for the week 11 game between the Los Angeles Rams and Minnesota Vikings. Olsen did well enough that ESPN reportedly auditioned him for one of the Monday Night Football analyst roles that ultimately went to Booger McFarland and Jason Witten. We all know how that turned out.

Olsen worked another bye week game last season, calling a week seven matchup between the Arizona Cardinals and New York Giants with Kenny Albert and Lindsay Czarniak. He must’ve done pretty well working that game as well, because The Athletic first reported on Jan. 15 that Olsen would not only be working Super Bowl week for Fox but also calling XFL games for the network. Olsen’s broadcast partner there ended up being none other than Burkhardt. But on the NFL front, Olsen elected to continue his playing career by leaving Carolina for the Seattle Seahawks.

During that Super Bowl week, Andrew Marchand of the New York Post wrote what amounted to a free agency preview for NFL broadcasters. While most of the piece was rightfully centered around Tony Romo, Marchand mentioned that Olsen “has a desire to be a broadcaster,”Adam Amin is on Fox’s play-by-play radar, CBS’ Dan Fouts is unsigned for next year and that Fox could have some movement with its number two team.

Its No. 2 game analyst, Charles Davis, is a free agent. Fox likes him, but if it feels Olsen clicks with Kevin Burkhardt on the five XFL games they will do, it could make a change. Fox favors two-man booths.

All these things turned out to be pretty prescient on Marchand’s part. After Davis’ Fox contract ran out shortly after the Super Bowl, CBS contacted his agent and asked if he’d have any interest in joining their NFL team.

“There was a certain time frame where it was just me and Fox talking,” Davis said, “and when that opportunity opened, CBS took the opportunity to jump in and indicated they were interested. And we went from there.”

CBS offered Davis not only the number two gig alongside Ian Eagle and Evan Washburn, but a role on other CBS Sports platforms and shoulder programming, including on CBS Sports Network, CBS Sports HQ and the network’s golf coverage.

“They made me an offer to come back,” Davis said of Fox. “CBS made me a different offer that was intriguing. It just seemed to make sense for me to be there at this stage of my career.”

Davis said he remembered only one time that he appeared on Fox Sports 1. It was one edition of First Things First last fall, when he called a New York Giants game against the Minnesota Vikings with Oliver and Sam Rosen and did the show the next day in Manhattan. He also used to do the odd call-ins to Colin Cowherd’s show, but those were mainly as an NFL Network draft analyst, he said, not during the NFL season.

“Charles is a tremendous person and broadcaster,” Fox Sports said in a statement via email. “We wish him the best.”

After many seasons at Fox, and before that a stint with CBS in various roles, Eagle is excited to work with Davis, though he’ll miss working with his good friend Fouts.

“He’s a highly accomplished analyst with a wealth of experience now, and he’s exceptional,” Eagle told AA. “Highly prepared, incredibly well liked. He’s about the nicest human being you’ll ever meet. It’s legit. Very positive, very upbeat demeanor. Smile on his face all the time, but very serious about the work. This will be a smooth transition.”

With an expanded playoff setup scheduled to begin this year, Eagle and Davis are expected to work one of the extra wild card weekend games together, which means the spotlight will be squarely on Davis during his first year in his new role.

“I need to justify them bringing me over,” Davis said. “I need to do a really good job to be part of a team that is really good already.”

To close out our phone call, Davis recounted an analogy from former Ohio State football head coach Jim Tressel, who talked about a hypothetical assistant coach who was always looking elsewhere for the next big job and the next great opportunity.

“He said the best way to get your next job,” Davis said, “is to be really good at the job you currently have.”