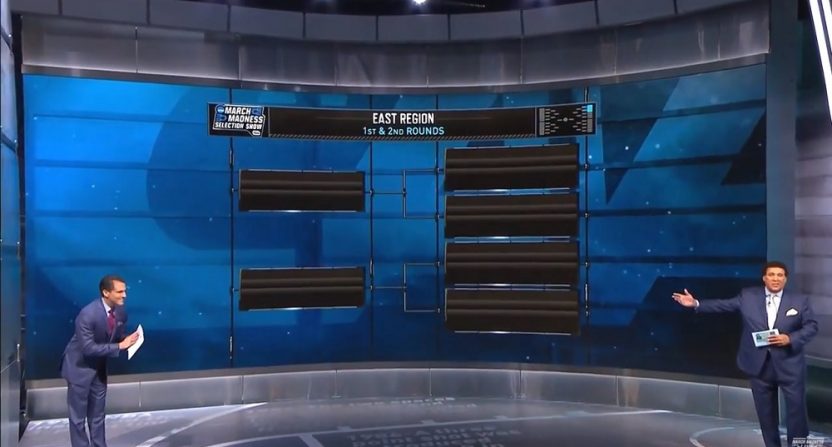 After last year’s much-maligned two-hour NCAA Tournament Selection Show on TBS, CBS and Turner Sports decided to go back to the drawing board for this Sunday’s show. With the show back on CBS, the two entities have announced today that we’ll have a one-hour show on Sunday at 6 p.m. ET with apparently no pizza and no preposterous “in alphabetical order” reveal that bogged down 2018’s program.

And unlike last year, when we had two or three sets of analysts with a live studio audience, we’ll only have host Greg Gumbel with analysts Clark Kellogg and Seth Davis at CBS’ world headquarters in New York City revealing the brackets, matchups, and regions. This is how it used to be, without silly gimmicks like Charles Barkley trying to go through the brackets on a touchscreen (which he could barely use anyway).

As usual, the NCAA Selection Committee Chairman (this year, it’s Bernard Muir) will be on hand for a live interview to discuss the glaring omissions and reasoning behind your team not getting into the tournament.

This year, CBS will air the Final Four on Saturday, April 4 and the National Championship game the following Monday, April 6.

But our main takeaway is that CBS and Turner have heard the complaints of the American people and returned to the tried-and-true one-hour formula of “just the brackets, just the brackets, and just the brackets.” Maybe this will stem the viewership slide that has plagued the Selection Show over the past few years and return the excitement back to what is normally one of the most anticipated days in sports – as long as there are no leaks.