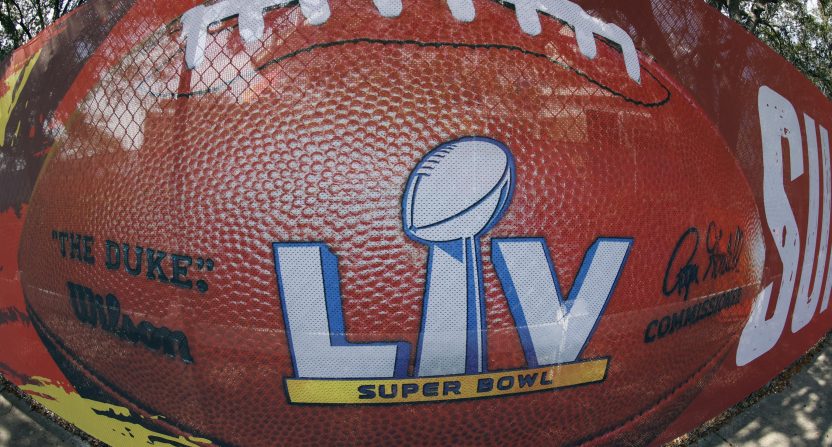 If you’ve had a chance to check out pictures of the ghost town that is Super Bowl radio row this week in Tampa leading up to Super Bowl 55, you’ll know that things are just different this week due to COVID-19.

Whereas this trio of reporters would normally arrive at the Super Bowl site the Monday or even the week before game day, they’re not set to arrive in Florida until Thursday night and Friday, where they’ll get tested and mainly just stay in their hotel rooms until Sunday. That’s ironically welcome news for Wolfson and Washburn, who may have had difficulty flying from their east coast locations that were ravaged by a snowstorm on Sunday and Monday. Another silver lining? Their schedules this week are almost identical to the ones they’ve been used to all regular season and the playoffs.

“It’s kind of like another week for us,” Wolfson told Awful Announcing. “With everything done on Zoom, we’re not meeting the teams in person, we didn’t need to be down there for media night.”

CBS normally only hosts the Super Bowl every three years, so everyone is missing the nonstop meetings, dinners, parties, events, and a chance to hang out with colleagues from inside and outside the network during Super Bowl week who they rarely get to see during the year. But without all those events on their plates this year, there’s actually even more time to focus on preparing for the game itself. Wolfson was able to be with her kids all week, help them with online school and hunker down in her office getting ready for Sunday.

“I actually feel like maybe you’re even more prepared because you’re not out and about,” she said. “But we’re doing the exact same process that we would normally do. And that’s read everything, research everything, and talk to the right people and have our Zoom meetings and production calls.”

All three have covered Chiefs games this season, with Wolfson part of the lead broadcast crew that called Kansas City’s Week 12 win over Tampa Bay from Raymond James on November 29. Feely played under Bucs special teams coordinator Keith Armstrong during his career, so he’ll be able to provide unique insight from his standpoint for the game.

Sunday will mainly feel like a normal Super Bowl game day for CBS’ reporters. Washburn will be doing reports and live shots from outside the Buccaneers’ team hotel during the morning and early afternoon. Those will be based off of what was heard in production meetings, coverage from that week and late breaking news if applicable.

From there, it’s on to the stadium where interviews will be done from a remote distance with players and coaches from both teams as they arrive at the game from their respective buses. Then it’s on to the pregame warmups and the start of the game.

Wolfson will actually be reporting from the field for the first time this season, though she’s not sure how close she’ll be able to get. She’ll be able to interview Chiefs head coach Andy Reid on the field just before game time, from a distance and while masked. It’s a definite upgrade from the conversations with coaches via text or statements from team PR that she, Washburn, and Feely had to work with during the regular season.

“There’s certainly definitely an ease that comes with being on the field,” Wolfson said, rather than the moat. “Just using the access and what you can see from your vantage points and there’s just a lot more freedom, where you can go, where you can walk. You just know it. It’s just routine for you. What we went through this year, for everyone, was just a different routine.”

Being on the field will also make it easier for Wolfson to hear what’s happening on the Kansas City sideline, with the crowd noise and the masked players and coaches making things more difficult if she wasn’t closer to the action than at any point during the season.

For Washburn and Feely, they’ve grown accustomed to reporting from the moat all season and are used to not being able to talk to coaches and players from up close.

“It’s certainly not as easy as when you’re down on the sidelines,” Feely said, “but that’s the way it is this year and we’re just grateful that we got the season done.”

Only reporting on one sideline, Tampa Bay’s in the case, will also help Washburn immensely from a logistical standpoint.

“I’m kinda just monitoring one side of the stadium in that way as opposed to covering regular season games,” Washburn said, “when I’m having to traverse each sideline via the stands at times. So that became tricky depending on the layout of the stadium. I’m sure everything like it is at the Super Bowl will have maybe a bit more to it, but I think in the nuts and bolts aspects it’ll be a lot like what we were doing up to this point.”

All three reporters will have to be ready if there’s an injury or other breaking news, a unique story they have to share about a certain player, or a long kick or an extraordinary special teams play in Feely’s case. It’s unclear as of now if there will be a coach interview just before halftime, and it’ll be either from the field if it’s Reid or from the moat if Washburn is talking to Bucs head coach Bruce Arians.

Postgame interviews for field reporters are always chaotic at the Super Bowl and will be even more so this year with social distancing and timing concerns. If time permits before the Lombardi Trophy presentation, Wolfson will do on field interviews with some of the winners with a microphone stand set up 15-20 feet away from the subject. Washburn will likely conduct interviews as well if the Bucs win.

“It’s probably one of the harder interviews you’ll do,” Washburn said. “But as long as you just strike the right tone, don’t overthink it and be as respectful as you can while having to ask the necessary questions to the coach, they’ve gone alright.”

While Washburn interviewed losing Buffalo Bills head coach Sean McDermott on the field two weeks ago at the AFC championship game, he’s expecting a normal setup this year with the losing coach outside the locker room with the reporter conducting the interview remotely in a split-screen format.

For the most part, this Super Bowl week is not just different for Wolfson, Washburn, and Feely because of the pandemic, but because of how everything leading up to the big game is so much like a normal week during this 2020-2021 COVID season. And there’s oddly some comfort during these times when anything adheres to a normal routine, albeit one that’s so much different than ever before.