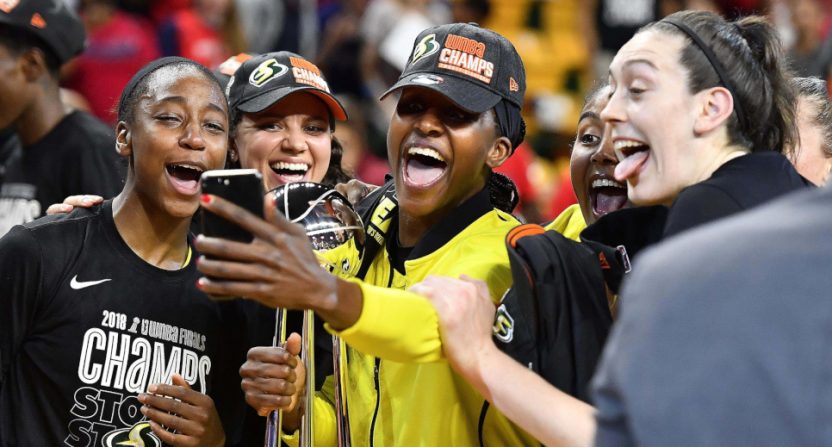 CBS Sports Network will feature national coverage of 40 live WNBA games in primetime and on weekends, beginning on Saturday, May 25 (8:00 PM, ET), when the Minnesota Lynx host the Chicago Sky.

…“Through our partnership with CBS Sports Network, the WNBA is joining an elite lineup of premium sports programming,” said NBA Commissioner Adam Silver. “We thank CBS Sports for making such a meaningful commitment to women’s basketball and for providing another platform to showcase the world-class athletes of the WNBA.”

“We are truly excited to partner with the WNBA, bringing the country’s premier women’s sports league to CBS Sports Network. This partnership is one of the biggest and most impactful women’s sports programming arrangements ever at CBS Sports, offering national exposure of 40 games per year,” said Sean McManus, Chairman, CBS Sports. “This agreement provides great live content throughout the summer in primetime and on weekends, and aligns two great brands in the WNBA and CBS Sports. We look forward to working with the WNBA for many years to come.”

This deal seems to make a fair bit of sense for both sides. It gives the WNBA a lot of extra nationally-televised games (even if CBSSN doesn’t have the distribution of some other channels, it’s still a decent national option), and it gives CBSSN some extra live sports programming. And the WNBA has seen some good ratings news in recent years, with 2017 and 2018 both posting records in some categories for the finals and regular-season ratings also rising last year (a 31 percent year-over-year boost for the whole season). So there’s some logic for CBSSN to pick this up.

This also fits with some of the other moves we’ve seen from CBSSN in recent months. They televised a lot of AAF games before that league fell apart, and they recently inked a deal with the BIG3. So there seems to be a push there to pick up some more live sports, and the WNBA looks like a good fit for that; it has more history and stability than, say, the AAF, it already has brand recognition, and it has plenty of passionate fans.

It’s significant that this is a multi-year deal, and that makes some further sense for both sides. The WNBA gains a partner they can work with for multiple years, one that has an interest in promoting them. And if CBS’ coverage helps grow the league’s fanbase, the network can reap the benefits of audience growth in future years.