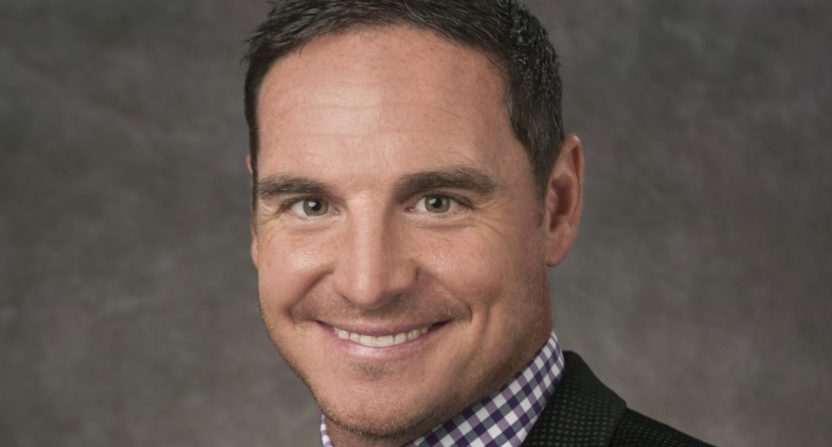 With Steve Beuerlein and Steve Tasker no longer listed as NFL On CBS game analysts for the 2019 season, the network has elevated CBS Sports Network college analyst and periodic NFL kicking analyst and sideline reporter Jay Feely to full-time NFL work this year.

Feely, who was an NFL kicker for 14 years until the end of the 2014 season, will call six to seven games this season alongside Tom McCarthy, a CBS Sports spokesman said. For game weeks where he’s not an analyst, Feely will periodically serve as a roving reporter for different broadcast teams as part of a group that includes Amanda Balionis and John Schriffen. At CBS’ NFL media day last week in New York, Feely spoke with Awful Announcing about getting into broadcasting, what he’ll miss about calling college football, and how CBS basically invented a new role for him nearly four years ago to get his start on NFL games.

“I’m excited to be on NFL coverage full time,” Feely told AA. “It’s where all my relationships are, it’s where I know people. It’s where I’m comfortable.”

Feely described getting to call NFL games on a regular basis as a five-year process. The 43-year-old got his start in broadcasting because he loved the opportunity to talk to people about sports.

“Football has given so much to my family,” Feely said. “And it’s awesome to get paid to go and watch a game that you’d want to go to anyway, and talk about a game that you love.”

The former Falcon, Giant, Dolphin, Cardinal, and Bear was a free agent when he called his first college game for CBS Sports Network, a Nov. 1, 2014 game between BYU and Middle Tennessee State. Feely played four games for Chicago that December and retired at 38. He worked his first full college season in 2015 and called a couple of games as an NFL sideline analyst after his NCAA duties were complete.

“I did a couple of games,” Feely said, “and there were some plays special teams-wise that happened and they kind of just threw it down to me and I broke it down on the sideline and they kinda liked it.”

So CBS toyed around the idea of having Feely work bigger games as what the network termed a kicking analyst.

“I think we created that position,” he said with a laugh.  “You don’t have somebody who talks about that, who understands and is an expert about kicking positions. Special teams is so much a part of the game but it gets overlooked.”

Feely debuted as the kicking analyst for CBS’ AFC divisional playoff game between Pittsburgh and Denver on Jan. 17, 2016 with Jim Nantz, Phil Simms, and Tracy Wolfson. Feely said he wasn’t, nor has he ever been, nervous during that or any broadcast.

“I mean you can’t fear failure,” he said. “And that’s something that I’ve always learned from kicking. You’re gonna at times screw up and Awful Announcing is gonna write an article about me. You just have to roll with that and enjoy it and understand that usually your failures lead to your greatest successes.”

CBS liked it enough that Feely was on the call for the Denver-New England AFC title game and for Super Bowl 50 between Denver and Carolina. Since then, Feely’s had the opportunity to prove himself on both college and pro games in his quest to be, in his words, the only kicker who’s called games full time besides the legendary Pat Summerall.

“We’ve talked about it throughout the past couple of years, and it’s something that I’ve always wanted to do,” Feely said. “So you’ve gotta be grateful for it and take advantage of it and go out there do the very best you can to make the game fun, make it enjoyable and try to bring knowledge to the fans so you add something to their viewing experience.”

Feely and McCarthy have yet to call a practice game together, Feely said, but seemed confident that he and his new partner would be on the same page when they call their first game, which CBS has yet to announce. Whenever that is, Feely said he’ll be ready.

“I prepare, I think, as hard as anybody in the game does,” he said. “I study the game as much as possible and really just try to be a student of the game.”

Feely said he’ll definitely miss calling Army games and meeting young cadets, who he has a special appreciation for since two of his brothers have served. But he’s also one of the few CBS NFL analysts who recently played and has relevant relationships with many active players and coaches.

“I think that allows you to do a better job as a broadcaster,” Feely said. “It gives you, obviously, a better window into what they’re thinking. A lot of times they’re more honest with you [in meetings] because they know they can trust you. And you have a relationship with them.”

Feely said he’s really looking forward to sitting in production meetings before his games with coaches and players, trying to soak up everything going on as each team makes its final preparations.

“There are so many different styles and ways to succeed,” he said, “and so it’s fascinating to kind of get inside someone’s mind and see how they do it. You understand right away if somebody knows what they’re doing, if they understand the game or not. It’s always, to me, a privilege to be in those meetings and I take it that way.”

Jay Feely certainly took a somewhat unique route to his current success, and we’ll see if he can parlay that into a strong first season working his first full-time package of NFL games.