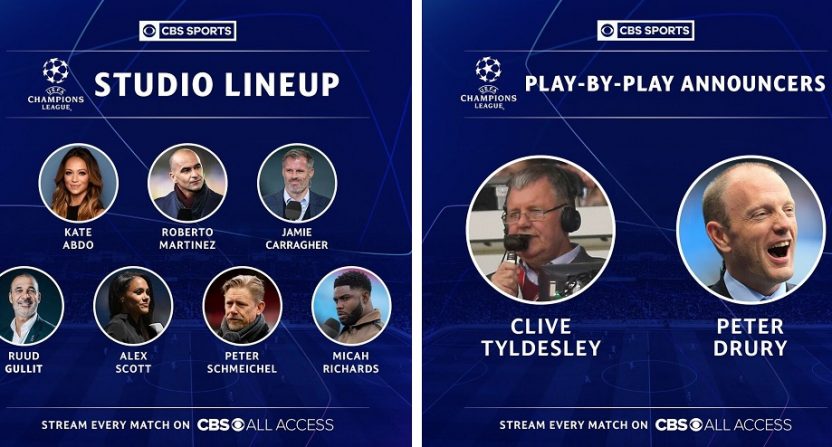 On Wednesday, CBS Sports announced that most of the remainder of this year’s UEFA Champions League coverage would be paywalled on the CBS All Access app. Buried in that release were sine notes about the studio coverage for the Champions League, which includes a 90 minute pregame show for the three matches airing on CBS Sports Network.

On Thursday, CBS announced the studio and game talent for their Champions League coverage, and much to the relief of American soccer fans, they’re going with experienced voices rather than token Americans (or say, Canadian basketball players).

Through a collaboration with London’s IMG Studios, Kate Abdo will anchor the network’s Champions League studio coverage, and she’ll be joined by analysts Roberto Martinez, Jamie Carragher, and Micah Richards. Peter Schmeichel and Alex Scott will be in the studio for the first couple days of coverage before shifting to on-site coverage from Portugal. Ruud Gullit will also be part of the network’s coverage, as a Champions League contributor and the lead analyst for Europa League coverage.

As for the matches themselves, Clive Tyldesley and Peter Drury will each call five matches across both the Champions and Europa League tournaments this August, though they’ll be calling them from the studio rather than on site in Portugal.

This was probably the smartest thing that CBS could do. Instead of attempting to re-invent the wheel like Turner did or lean on an Americanized set of studio analysts like both Turner and Fox did, CBS has decided to lean heavily on the European experience of these personalities. Abdo is the most familiar name to American viewers through her work at both Fox and Turner, and while she’s not above criticism, people shouldn’t be up in arms about her hiring. Martinez is also a familiar face for American viewers, not only through his managerial roles at Everton and the Belgian national team, but also through his studio work for ESPN at major tournaments from 2010 through 2016.

All in all, CBS made a series of wise decisions with their coverage. People will still complain about matches not being televised this year, but there would be complaints unless every game was available on the CBS broadcast network. I think their coverage plans show that they’re taking the Champions League and Europa League seriously, and this brief run of matches in August sets the table for something more special over the 2020-21 tournaments.