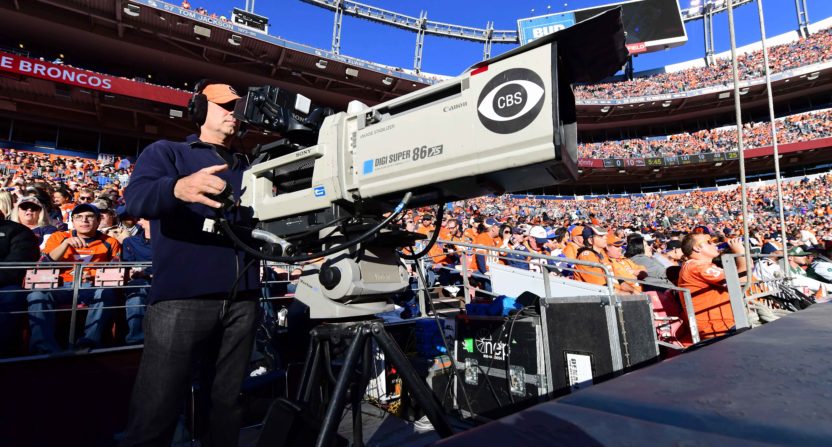 Targeted advertising is absolutely not a new thing. (If you’re not using an ad blocker you’re probably being bombarded with it right now on this very page! Uh, sorry about that, but, hey, we need to eat.)

They’ve always been a tool for digital sites, though, for obvious technological reasons. Networks broadcasting a national signal can’t beam commercials to some homes and not to others. Localization is possible, of course, thanks to the affiliate structure; it’s why I always got to see ads for my favorite local bar during Bears games here in Indiana. (It always elicited a “Hey, I know that waitress!”, even if I’d seen it already that day. Once I saw it while watching a game at that bar. Center of the maze. It also beat watching Mitch Trubisky.)

Now, though, networks are exploring the ability to offer more targeted commercials to viewers. According to Brian Steinberg at Variety, that might be reality sooner rather than later.

CBS plans sometime in the second half of 2021 to start making available new technology that will let advertisers buy commercials that are sent only to a particular subset of the network’s viewing audience. These so-called “addressable” ads can be coded in such a way that they reach only consumers believed to be interested in buying a truck; executives who make decisions about business software; or families expecting their first child.

Advertisers running an ad campaign on CBS can “give it a protein shot,” says John Halley, chief operating officer of advertising revenue at ViacomCBS, by using the new technology.

Calling them “addressable” commercials is an interesting twist on the “targeted” principle.

The company even plans to send out promos for its own stuff via addressable technology. “If you’re an ‘NCIS’ viewer, you probably don’t need to see an ‘NCIS’ promo,” says Mike Dean, senior vice president of advanced advertising at ViacomCBS, in an interview. “Maybe you should see a Paramount Plus promo.”

That is certainly a valid point; some of my most frustrated ad time is spent watching YouTube TV promos on YouTube as a YouTube TV subscriber. (Avoiding those should be included in the monthly subscription cost.) So, how might this impact the sports audience? Well, considering some of the most reliably pricy ad time with the biggest audience comes during NFL season, and considering this technology might be coming in the fall, the application is pretty obvious.

Advertisers tend to rely on digital venues to deliver targeting while counting on linear ones for size. The new technology “embraces a model that doesn’t make advertisers choose,” says Dean. ViacomCBS already sells addressable ads on its cable networks, and also plans to add addressable ads via smart TVs on the same timeline as it will the broadcast network.

“This modernizes the ad-supported TV ecosystem,” says Chris Geraci, an ad-industry veteran who is chief client officer for Adcuratio, an ad-tech company that has worked with ViacomCBS to create new addressable formats. The executive envisions a future when advertisers in some of TV’s biggest events, such as football games, can run the sort of big-splash commercials they always have, and also choose to scatter addressable spots to dozens of different audiences across the country.

The ability to combine a more targeted approach with the blanket, volume national ads would certainly seem to appeal to advertisers. Considering that network ad revenue is why rights are still so expensive, which in turn props up the revenue of pretty much all the top American sports leagues, everyone has a vested interest in keeping that model alive and evolving. This would certainly be a big step, if it actually works.

Of course, the last thing a lot of people want is to be bombarded with even more commercials that are sent to them thanks to various outlets harvesting their data and habits. This would certainly be another step towards that, though at this point, the genie is probably out of that particular bottle.