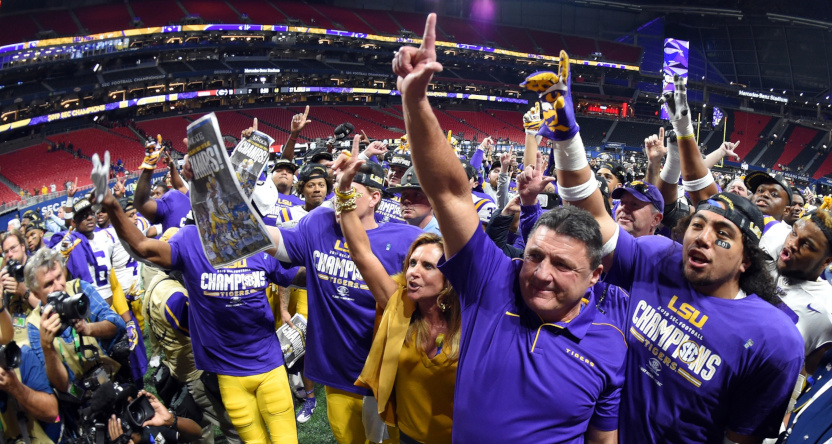 2019 has been an incredible college football season so far for CBS. The network announced Sunday that they’d posted the best viewership numbers for their season-long coverage (to date; they still have Army-Navy next week, which will undoubtedly bring in plenty of further viewers) in 29 years, and that Saturday’s SEC championship game (which saw then-No. 2 LSU beat then-No.4 Georgia 37-10) averaged 13.703 million viewers. That’s the second-highest viewership total for any NCAA game this year, behind only Nov. 10’s LSU-Alabama game (which also aired on CBS, and which drew 16.64 million viewers on average).

Here’s more from the CBS release:

For the 11th consecutive year, the SEC ON CBS, featuring the best game from the best conference, is the highest-rated regular-season college football package on any network. CBS Sports’ coverage of the 2019 SEC ON CBS season averaged a household rating/share of 4.2/11, according to Nielsen national ratings, topping all other networks and up +24% vs. last year.

The SEC ON CBS has the two most-watched and highest-rated games of the season on any network with LSU-Alabama (9.7/24 HH rating/share, 16.729 million viewers; Nov. 9) and yesterday’s SEC Championship between LSU and Georgia (7.9/20 HH rating/share and 13.703 million viewers) despite the lopsided score in the game.

Those are impressive numbers for the SEC championship game indeed, beating out Fox’s coverage of Ohio State-Michigan (which averaged 12.42 million viewers) as the season’s second-best game. And CBS’ claim to be second here does seem to hold up; we don’t have full ratings for Fox’s Big Ten championship coverage yet, and their release only mentioned a 7.8 rating rather than viewership numbers (although it did claim “second-best rating for a college football game on any network this season in the metered markets”), but Showbuzz Daily has their 8-9, 9-10 and 10-11 p.m. Eastern hours (most of the game) with 11.026, 13.253, and 13.202 million viewers respectively, so it seems quite likely their viewership average will come in below the 13.7 million CBS netted.

Overall, this perhaps goes to further show the value of the SEC on CBS package, which the network is reportedly already trying to retain. Those games provided a whole lot of this year’s top-viewed CFB games, as they do every year, but their overperformance relative to the past is significant. With SEC on CBS coverage up 24 percent year over year and providing CBS’ best CFB ratings since 1990, that’s only likely to further increase the demand for the rights in that package when they expire after the 2023-24 season. That’s still a ways away, but these numbers make it clear that this SEC package is as desirable as it’s ever been (if not more so). That’s excellent news for CBS for the remainder of this term, but it could make the bidding for that package even more interesting.