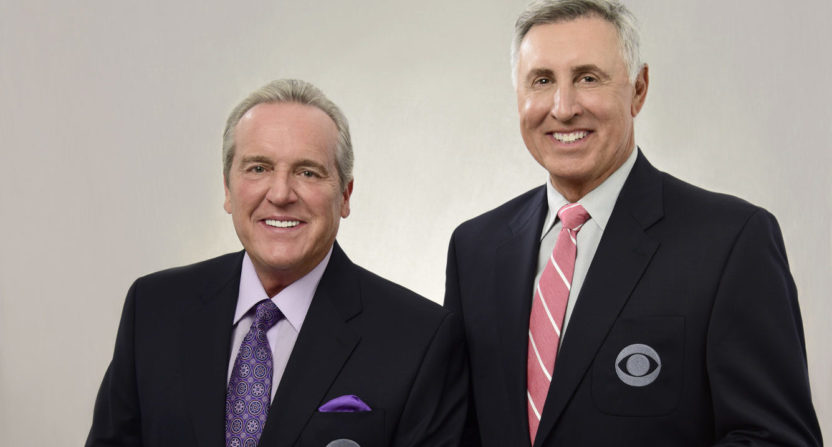 Brad Nessler and Gary Danielson did not particularly need extra bonding time a week into their renewed partnership on SEC on CBS, but they got it anyway, courtesy of Hurricane Irma.

The duo had just flown back to Atlanta from Fayetteville, Arkansas, where they had called the Razorbacks’ loss to TCU, when the storm hit several hundred miles south, in Florida. Danielson attempted to return to his home in the Fort Myers area but didn’t even reach the state line before being forced to turn back. So he called his pal, Brad, who offered up his lake house back in Atlanta. When the power went out there, Nessler offered Danielson to stay with him and his wife, and the two spent an afternoon working together at the kitchen table.

After the three-day saga finally ended, Danielson declared that the longtime friends could handle 15 Saturdays together and even all the Thursday and Friday meetings leading into those games, but living together was a bit too much.

The two longtime commentators first worked together in the 1990s on ESPN but were separated in 1999 after seven and a half seasons, with Danielson eventually migrating over to CBS to call the SEC alongside Verne Lundquist. For a decade and a half, Nessler and Danielson remained close friends, texting or talking on the phone regularly, as they called games for competing networks.

Then, in May 2016, CBS announced that Lundquist would retire at the end of the season and that Nessler would replace him, working alongside Danielson once again. In the interest of reacquainting its new broadcast duo, CBS had Nessler and Danielson call a Thanksgiving-weekend game between Missouri and Arkansas last fall.

“It felt instantly like we had done a game the week before,” Danielson recalled in a phone interview last week. “It felt like the timespan, instead of being 17 years, was 17 days.”

“It was almost eerie how easy it was last year,” Nessler added. “Really, the first quarter of the Missouri-Arkansas game felt just like 16 years ago. There was basically no transition, no uneasy feeling. It was just like it used to be.”

The pair called the Sun Bowl as one final tune-up for this fall, then dove into a full slate of high-profile SEC games.

In some ways, the weekly Saturday afternoon game on CBS is unlike any other national broadcast assignment in sports. Nessler and Danielson call the same conference all season long, doubling, tripling and quadrupling back to the high-profile schools. And given that exposure, plus the fact that they have to, ostensibly at least, call each game down the middle and without bias, they’re wide open to accusations that they love this team or hate that team. In a conference full of dangerously passionate fans, it’s a recipe for angry Twitter trolls and Facebook commenters.

That’s why CBS couldn’t hire just any play-by-play man to replace the legendary Lundquist and endure the inevitable comparisons. They needed someone like Nessler, a widely respected veteran who offers little ground for criticism.

“Brad has always been an A+ broadcaster. Always,” CBS coordinating producer Craig Silver said Monday. “I don’t think we could have found a more perfect person to — I don’t want to say ‘replace’ Verne — but to carry along the mantle of the tradition established by Verne.”

Nessler has joked that with “Uncle Verne” gone, he should be known as “Cousin Ness,” but it’s obviously not that easy to follow someone so revered, especially with a broadcast partner who spent more than a decade beside him. Nessler and Danielson both admit there has been a necessary adjustment period, as the two iron out rhythm and timing.

Nessler earned acclaim during his second game of the season for a brilliant call of Florida’s game-winning Hail Mary against Tennessee, but it was a moment in the second quarter of that matchup that offered a progress report on his rapport with his new (old) analyst. The exchange began with a quip from Danielson about the game’s momentum, which seemed to take Nessler aback.

After several moments of light confusion, Danielson explained that he does not believe in momentum in sports, asking in jest, “Where’s Verne when you need him?” then saying to Nessler, “We lived together for three days. Can’t you tell when I’m being sarcastic?” Nessler was prepared with a comeback about Danielson forgetting to wash out his coffee cup, and the broadcast transitioned to a photo of the two of them in Nessler’s kitchen, set to the Odd Couple theme song.

What was clear from that banter, and from listening to any of Nessler and Danielson’s calls, is that whether or not they have mastered each other’s rhythms, they have chemistry and camaraderie in abundance. They spend time together off the air (even when the weather is clear), and you may be surprised to learn Nessler considers himself the “black hat” of the two, next to the comparatively “clean-living” Danielson. That dynamic is, in some ways, the opposite of their on-air partnership, where Nessler is cool, calm and in control, while Danielson plays the renegade, blurting his honest thoughts, regardless of which fans they antagonize.

We talk often about “chemistry” between broadcasters, an intangible force that causes some duos to function smoothly and others to sputter and stall. Danielson, a former NFL quarterback, compares chemistry between broadcasters to a signal-caller’s relationship with his receivers.

“It’s just comfort and trust,” Danielson said. “When you work with a guy for a while you kind of get a feel of when he’s going to break out or confidence that he may look a little bit covered on that play, but you trust that he’ll be able to get open, so you throw the ball to him.”

By any definition, Nessler and Danielson have chemistry, even only a few weeks into their first season back together. They crack jokes with each other on-air, veering off-topic and then snapping back to football. They’re not afraid to tease each other or to get goofy. (It turns out Nessler has a great Steve Spurrier impression.) That comfort, Nessler says, comes from the relationship they have cultivated away from the booth.

“He makes me laugh both places, off the air and on the air, and I have to be careful sometimes on the air that it doesn’t become a giggle-fest because people don’t like to hear that.”

Nessler and Danielson’s easy relationship and genuine bond makes their broadcasts light and easy to listen to. When the guys in the booth are having fun, it’s natural that the viewers will, as well. And as long as they’re enjoying themselves and each other, their reunion should continue to roll along smoothly. That is, as long as no one asks them to become roommates.