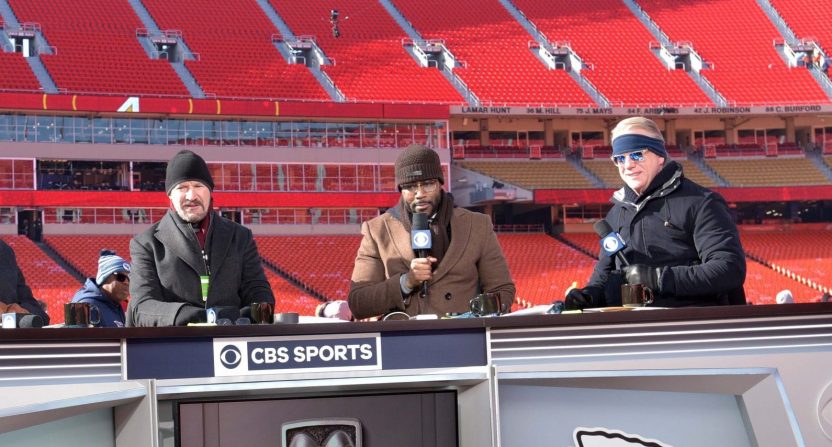 Bill Cowher hasn’t been an NFL head coach since 2006 and he seems to have nestled into a comfortable role as an analyst on CBS’ The NFL Today where he’s been ever since. But one of Cowher’s side gigs over the past 14 years, at least in theory, is refuting the notion that he would like to return to coaching. Perhaps more than any other former NFL coach, rumors about the potential return of the Super Bowl champ seem to spring up every year. Heck, he’s even had to refute coaching rumors that he’s started himself.

For all its weirdness, 2020 is no different in this department.

Earlier in the week, Cowher’s CBS colleague Boomer Esiason was in a discussion on his WFAN radio program about the potentially available head coaching position with the New York Jets. When co-host Gregg Giannotti said that Cowher taking the job would never happen, Esiason responded with an anecdote that perked up everyone’s ears.

“Really? What do you mean it’s never going to happen?” Boomer asked.

“All I know is that yesterday, he was showing me and Nate [Burleson] film of him coaching on the sideline where he was mic’ed up, and we looked at each other like, ‘hmm, what does that mean?’ Is he sending a message? I’ve worked with him for 14 years and I’ve never seen that.”

“He was saying to me yesterday, he’s the one that told me the Jets job is going to be really attractive, and they could hire whomever they want,” Esiason said, “and he told me he loves Joe Douglas.”

“I asked a couple people at CBS yesterday, when I was talking to Adam Schein and Kyle Long, and I asked the guys who were Jets fans,” Esiason. “All five of them were, and when I asked what they’d think about coach Cowher being the Jets coach, they went wild.”

Boomer wasn’t saying the Cowher actively told him he wanted to return to coaching and was interested in the Jets, but he certainly implied it. And when you couple that with the fact that, back in 2009, Cowher did indeed consider taking that very job, it lends a bit of credence to the rumor.

But as he does every year, Cowher emerged from behind his studio desk to confirm that, no, he is not interested in returning to coaching…mostly.

“I have no interest in coaching,” Cowher said in a phone interview with ESPN.

“I have too much respect for the coaching profession to talk about a job that isn’t open,” he said. “From that perspective, any job that is open, I have no interest in coaching.”

Cowher is smart enough to leave the door open just a crack as he notes he isn’t interested in any coaching job that is currently “open.” Adam Gase hasn’t been fired yet as the head coach of the Jets, but he almost certainly will be soon, and at that point, the job is “open.” Hmm.

From a legacy standpoint, there’s no good reason for Cowher to return to the sidelines. He cemented his tenure with the Pittsburgh Steelers by winning a Super Bowl. He was recently inducted into the Pro Football Hall of Fame. He has one of the top gigs a former coach can get in broadcasting and will likely have the chance to keep that role for the foreseeable future. The odds that he could return to coaching after a 16-year hiatus and find the same level of success are slim and the history books are littered with great coaches who came back and failed or couldn’t recapture the magic, soiling their reputations a bit.

As always, never say never, but it seems as though Cowher is destined to keep denying coaching rumors until the Earth is but dust.