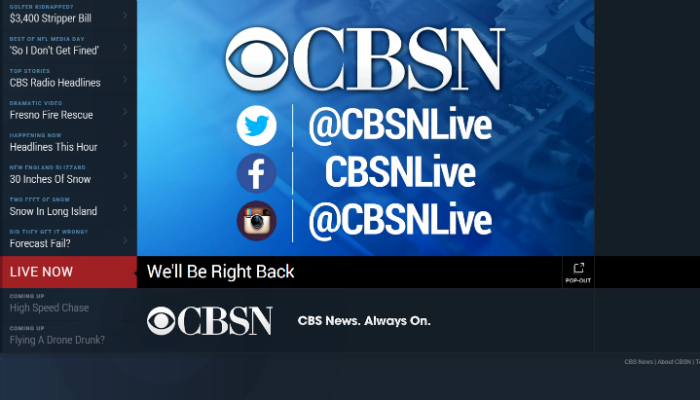 One of the axioms of modern sports television is that news and highlights are dead. Even though many of us who grew up on the classic SportsCenters of the mid-90s long for those days again, ESPN’s flagship show is a vastly different animal today. In fact, with the many iterations of SportsCenter now airing – from AM to The Six to SVP – the show is moving further and further away from its traditional course and trying to make each episode a unique blend of commentary, news, and highlights (probably in that order).

Other networks have tried to resurrect the format have failed to make a lasting too. NBCSN tried The Lights and it fell by the wayside. FS1 tried to go head-to-head with ESPN with Fox Sports Live and it ended up being a late night show from a broom closet before finally folding. Then the network went all-in on Embrace Debate with Jamie Horowitz… and we all know how that turned out.

Even ESPNEWS has slowly but surely gone to more live sports programming and replays of ESPN studio and radio shows rather than constant sports news and highlights.

With all of this in mind, the most surprising development in the industry would be a major network going all in on sports news, right? Well, that’s exactly what CBS is apparently planning on doing.

Via AdAge comes this very interesting news of CBS CEO Lex Moonves talking about the potential launch of a 24/7 streaming sports news service. CBS is already in the streaming news business with the CBSN outlet which a sports version could very well spin out from:

Speaking to investors during the company’s second-quarter earnings call, CBS chairman and CEO Les Moonves revealed that a 24/7 live-streaming outlet devoted to sports was in the works. While the project is very much still in the larval stage of development, the as-yet unnamed offering is expected to be modeled on the extant streaming news service, CBSN.

“CBS is a big player in the sports world,” Moonves said, citing the network’s rights deals with the NFL, the PGA and the NCAA Div. I Men’s Basketball Tournament, which it cohosts alongside longtime partner Turner Sports. “We are going to look to differentiate ourselves from the ESPNs and the Fox Sports and, well, we think we have a great opportunity for success.”

Moonves went on to note that CBS already has an established online sports group in place down in Ft. Lauderdale, Fla., and that the new streaming sports service would piggyback off the CBSN infrastructure. CBSN in November will mark its third year of operations.

Over-the-top sports played a particularly prominent role in the CBS earnings presentation; earlier in the call, Moonves told investors that Showtime’s August 26 Floyd Mayweather-Conor McGregor bout will be available to stream even for fight fans who don’t subscribe to the premium network. Those who buy the brawl will have an opportunity to sample Showtime OTT for a limited window after McGregor (presumably) gets hustled out of the T-Mobile Arena on a stretcher.

There’s clearly a gap in sports news right now and maybe a digital/streaming outlet is the way to make an impact on the wider sports scene. It’s difficult to tell how successful CBSN has been to this point from a reach and revenue standpoint a few years into their existence (even when companies promote millions of streams it means average viewership is much lower and it’s a free service that doesn’t charge subscription fees), but clearly CBS is optimistic enough about the space to double down on their investment. If one of the truths working against the news and highlight show is that “everybody gets their news and highlights online” then why not go online where the consumers are and compete there?

It’s fascinating on so many levels because on the television side, CBS has been in a distant fourth place in cable sports with CBS Sports Network lagging far behind other competitors. CBS SN isn’t even rated by Nielsen and has nowhere near the rights packages that even FS1 or NBCSN have at their disposal, and for now, they seem content with that.

With this investment on the digital side though, and in news, CBS is trying to get ahead of the curve and provide a service that is not currently being offered. The good news is that a CBSN sports service could potentially provide more jobs in an industry that has seen far too many layoffs, especially for news reporters and anchors that may be looking for work. Perhaps some of those former SportsCenter anchors and ESPN reporters could provide immediate credibility and name-recognition to this CBS outlet.

A lot of questions would need to be answered and this project still seems to be in the idea phase. Who would staff it? What format would it take? What highlight rights could CBS get for it? If it does come to fruition, a 24/7 streaming sports service isn’t likely to set the world on fire in terms of big viewership numbers or threaten the existence of the cable networks. But it is something that’s new and forward-thinking and could provide another option for sports fans. And that’s always a positive development.