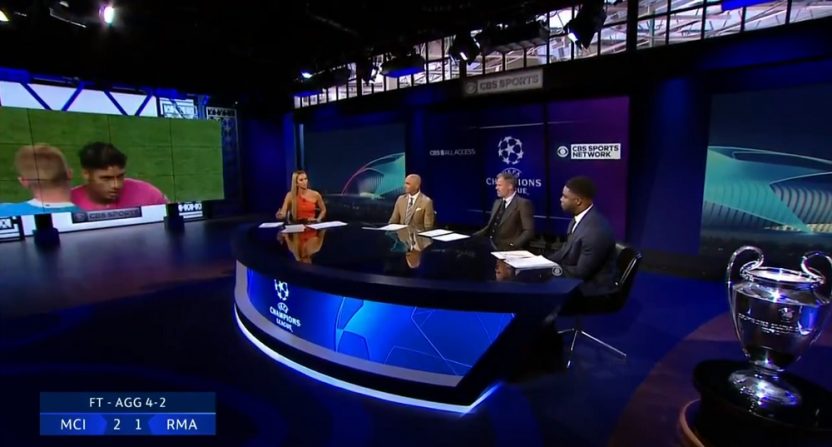 Like many of you, I was somewhat puzzled when CBS Sports won the American TV rights to the UEFA Champions League and Europa League. Like Turner Sports, their predecessor as rightsholder, CBS Sports didn’t have much of a history with soccer. Would CBS try to put an even more American spin on coverage like Turner did? Would they simply use the tournaments as inventory and put the bare minimum of effort into the coverage?

Hopes for the CBS coverage took somewhat of a hit when the schedule for this August was confirmed – nearly all of the matches were scheduled for CBS All-Access, the subscription service run by CBS. If most of these matches are being paywalled, how much effort is CBS really going to put into creating a watchable product?

Well, it turns out they put a whole lot of effort into their Champions League coverage, and most fears were assuaged when the talent roster for the coverage was revealed. The Champions League restarted with second leg matches in Manchester and Turin on Friday and Barcelona and Munich on Saturday, and CBS ended up doing themselves proud while also showing fans that if they pay for CBS All-Access, they’ll at least be getting quality content.

I feel the need to share this trailer for the Champions League narrated by Patrick Stewart, which did a good job setting the stage for what the coverage on CBS would look like.

"Here is where you live to be thrown into the night sky. Where history collides with a moment of greatness. Where immortality is the aim of unknowns and legends."@SirPatStew sets the table for the return of the @ChampionsLeague. pic.twitter.com/H1RkmtJrsp

The studio coverage was smart, with host Kate Abdo doing a good job at setting up the analysts on the panel and playing traffic cop. The analysts generally didn’t step on each others toes, didn’t get into contrived debates, and treated the viewers like adults who actually knew what they were watching, as opposed to rubes who came across live sports on the TV and just kept the channel on. Micah Richards was a standout to me, especially when you consider his relative inexperience as an analyst compared to his colleagues on set.

"This is why they brought him in. A manager like Pep Guardiola is to win the @ChampionsLeague. There's no doubt about it." @MicahRichards takes a closer look at @ManCityUS' European ambitions. pic.twitter.com/SzTxqfBNyi

However, there was *some* shtick with this bracket segment (complete with the CBS college basketball music at the start), but it was more fun and less cringeworthy than you’d expect.

I also very much enjoyed this segment with Alex Scott, Peter Schmeichel, and Jamie Carragher talking about penalties, which could come into play over the rest of the tournament.

"For me it was important to put myself in the situation where I felt I was in control of something. I'm not in control of anything in a penalty shootout."@Pschmeichel1 breaks down his strategy on how to handle penalties. pic.twitter.com/wLCYWkbFtf

The inevitable VAR discussion was also well done, with the analysts (Schmeichel, Carragher, Roberto Martinez) speaking their minds and not blindly defending the system.

"If we can’t get it right, we should scrap it"@Pschmeichel1 and the rest of the commentary team talk about the merits and concerns for VAR. pic.twitter.com/YpBovBIXR9

CBS also had talent on site for pre-match analysis and pre and post match interviews, another step that shows their commitment to the coverage.

The starting XIs are in for both @ChampionsLeague matchups and Steve McManaman is pitchside to break down the squads. pic.twitter.com/CalBr9WJpF

"Barcelona know their limits."@GuillemBalague breaks down @FCBarcelona's winning strategy and their prospects against Bayern Munich. pic.twitter.com/KGWywKw3Av

CBS also did not stick to sports, with an insightful conversation on racism in world soccer taking up some of Saturday’s pregame show.

"Sports have the power to change the world and it does because that’s what we are seeing.”

I’ll also give some credit to the CBS social media team, for getting goal highlight videos posted on Twitter within around five minutes of the goal happening. It’ll be more difficult to do this with more than two matches happening at a time, but for now, this is an impressive turnaround.

With all that being said, the coverage didn’t go off without a hitch. There were some technical hiccups that popped up throughout the first two days of coverage, largely surrounding the on-site reporters. Some viewers also complained about the video quality of the CBS All-Access streams, which I can see on a rewatch (though it’s not unwatchable by any means).

And of course, there’s the expected frustration about the CBS All-Access paywall. Yes, it’s unfortunate that all of the quarterfinal and semifinal games will be paywalled, but broadcast TV is a no go for mid-week games on as little notice as CBS would have been able to give for this month’s Champions League restart. I still can’t understand why CBS Sports Network wasn’t an option, though. Is CBS really that wedded to airing three hours of Tiki & Tierney instead of the quarters, semis, and final of both the Champions and Europa League? Unless there’s some kind of contractual obligation tying the network so tightly to the radio show, it seems very much like a missed opportunity to me.

But overall (albeit with a sample size of just two days), CBS Sports did itself proud with its Champions League coverage. I wasn’t dying to hit the mute button during studio coverage (which I regularly did during Turner’s coverage), I didn’t immediately turn my TV off when the match I was watching ended (again, a former habit of mine), and I didn’t even think to look at which network the Spanish broadcast was on (you get the picture). It felt like the CBS Champions League coverage was in the same league as NBC’s Premier League coverage and ESPN’s well-received coverage of World Cups and European Championships in the past. In this country, the Champions League has been used as a tournament for experiments (Gus Johnson, Steve Nash, come on down). But with CBS raising the bar, it finally looks like the tournament will receive the respect it deserves on American airwaves (and, unfortunately, streaming devices).