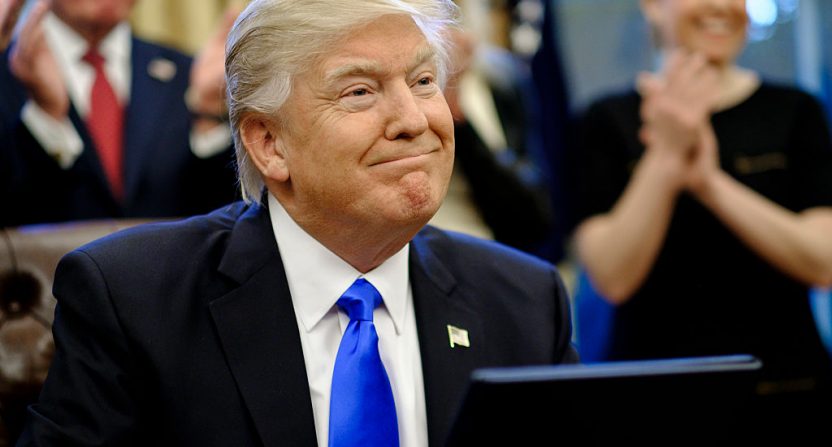 After a year without a presidential interview featured on the Super Bowl pre-game show, that trend is resuming for Sunday’s Super Bowl LIII. Former U.S. presidents George W. Bush and Barack Obama regularly gave interviews featured on pre-game coverage, and current president Donald Trump did that in 2017 when the game aired on Fox, but Trump opted not to give an interview to NBC around last year’s Super Bowl. CNN’s Brian Stelter reports that Trump has agreed to do a Super Bowl interview with CBS this year, though.

That interview will be with Margaret Brennan (moderator of Face The Nation), and it will be pre-taped on Friday. Some of it will appear on Brennan’s show Sunday morning (10:30 to 11:30 a.m. Eastern), with other portions appearing during the actual pre-game coverage (which will start at 11:30 a.m. Eastern at the conclusion of Brennan’s show). There could be some interesting transitions there; Brennan’s show will be live from Atlanta as part of CBS News’ Super Bowl coverage, and will include interviews with “James Brown and other correspondents and newsmakers to discuss the game and current events,” so there’s going to be plenty of Super Bowl talk there too. But that’s still a politics-focused show, and one that’s not officially part of the pre-game lineup. And depending on what this Trump interview winds up being about, it could go a long way from Super Bowl chatter and could make for an awkward shift back to pre-game coverage.

That might be even more obvious when it comes to airing portions of this interview during the actual pre-game show. It makes sense for CBS to do some of that; the pre-game show proper will presumably pull in more viewers, and as mentioned above, there’s a tradition of showing presidential interviews during the pre-game. (And CBS has even done this before with Trump apart from the Super Bowl, running a long in-booth interview with him during the 2016 Army-Navy game when he was president-elect.) But if the chosen segments aren’t about football, that carries some blowback potential from viewers hoping to just see discussion of the game. (And there could be controversial remarks about football, too, especially if the conversation touches on kneeling players.)

It’s notable that the airing of this interview comes just two days before the State of the Union speech that Trump will deliver next Tuesday night, too, which will likely be carried by the broadcast networks (and the cable news networks). So there will be plenty of Trump comments on TV over the next week, which is also interesting considering that he’s rarely given interviews to TV news outlets other than Fox News. The State of the Union may have less of a sports impact, though, as the broadcast networks don’t have any sports programming that night; the largest possible connection is decreased audience for college basketball games like Kansas-Kansas State (on ESPN) or NBA games like Rockets-Raptors and Celtics-Warriors (the TNT doubleheader) from people watching the speech and analysis afterwards.

It will be interesting to see what questions Brennan asks in this pre-Super Bowl interview, what Trump says in response, and how CBS decides to use the footage. We’ll see just how much of it winds up making its way into the pre-game show proper, and how viewers react to it. But it’s notable to see a presidential pre-game interview return after a year off.