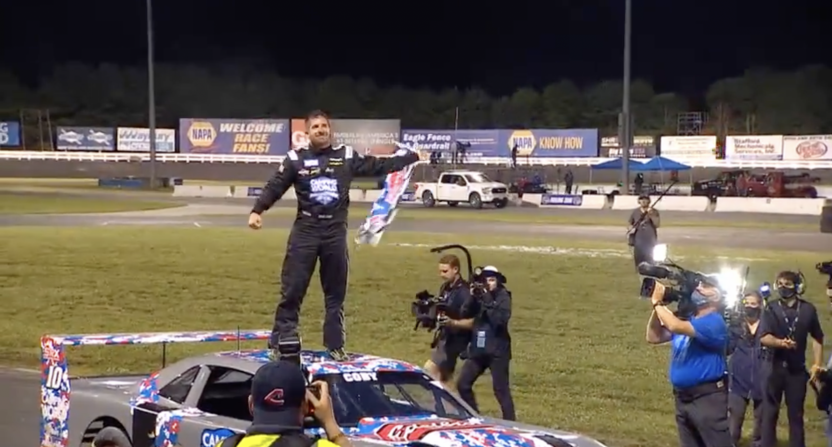 Despite the occasional (and understandable) first race issue, the Camping World SRX Series and the CBS broadcast of the first race was ultimately a success. In just one race, the SRX/CBS partnership gave each other legitimacy.

SRX gave CBS legitimacy in the racing community by giving the network an opportunity to get back into producing motorsports after being away for so long. CBS actually has a wide variety of motorsports rights that include Formula E and various sports car series, but this is the first racing series that CBS is actually producing in a long time. While CBS Sports chairman Sean McManus has said that the network isn’t looking to take on IndyCar or NASCAR, having SRX has to give CBS that option in case they someday change their mind.

CBS gave SRX legitimacy by providing a big-league feel to local short track racing that we haven’t seen before. No offense to channels like Mav TV that show the World of Outlaws and the Chili Bowl but this is a live primetime broadcast on national TV with NASCAR-level production value. For many viewers, this SRX race may have been their first taste of local short track racing.

The first checkered flag of the @SRXracing season belongs to Greg Biffle!! ? pic.twitter.com/uNnO1L732g

Despite SRX being a completely new series with a format that’s unfamiliar with everyone, CBS did a nice job informing viewers about the series and the format without dumbing things down or belittling the audience. Unlike how some racing broadcasts can sometimes repeat the same things multiple times in the same race, CBS gave an in-depth explanation at the start of the broadcast and apart from the occasional reminder, that was mostly it.

Another thing CBS did well was showcasing the drivers and their personalities but not doing it too much that it overshadowed the racing. Whether you’re a four-time Indy 500 champion like Helio Castroneves, a talented unknown like Ernie Francis Jr., or a local star like Doug Coby, CBS had an approach to get you to know the people and their personalities and give you a reason to root for them but not at the expense of the on-track product.

What’s great about the Camping World SRX Series is that while this is supposed to be for fun, every driver has something to prove. 65+ year olds Bill Elliott and Willy T. Ribbs are there to teach the younger guys a lesson. Guys like Tony Stewart and Michael Waltrip are looking to prove they still got it after recently retiring the past few years. Someone like Francis, who at 23 is already a seven-time Trans Am champion, is looking for exposure on a national platform to potentially further his racing career.

"Just like any other Saturday night short track race. We'll give it all we got for 100 laps and hopefully the local guy comes out on top ahead of all these superstars."

Local all-star Doug Coby talks about winning Heat 2 and his strategy for the main event with @MattYocum. pic.twitter.com/bRZx4HV7AD

Doug Coby’s win at the first SRX race really epitomized what this series can do. Each race will have a “Rocky”-type guest driver consisting of the track champion who takes on the legends. For Stafford, that was Coby. A six-time Whelen Modified Tour champion, Coby is a legend in the New England racing scene but is largely an unknown in the rest of the country.

Winning on CBS, on primetime broadcast TV, Coby gave many racing fans a first impression that they won’t soon forget. At 41, Coby’s opportunity to race in the NASCAR Cup Series probably won’t happen but for one night, he tested himself among NASCAR champions, Indy 500 winners, and sports car champions and he dominated. People might tune in to see the legends and experience some nostalgia but they’ll learn and remember those who come in and beat those legends in equal equipment.

The broadcasting crew did great for the most part. Allen Bestwick was on play-by-play with Danica Patrick (who is switching with James Hinchcliffe and Dario Franchitti throughout the season) as his booth partner. Lindsay Czarniak was the host with Matt Yocum and Brad Daugherty in the pits. The only person who received criticism was Danica Patrick and while some of that criticism was warranted for a traditional analyst role, one could argue she had the toughest job out of anyone on the broadcast.

Think about it like this. Not only is broadcasting something that Danica doesn’t do full time, she’s tasked with trying to explain to viewers what to look for in an event that no one has ever seen or experienced. Usually, when someone is a booth analyst, they have raced the cars they’re trying to describe but if it’s a brand new series, that’s not the case.

Instead, if you viewed Danica’s role as more of a fan who knows about racing in general, then she did a much better job. I enjoyed her making a joke or two at NASCAR’s expense about competition cautions and just saying what most fans are actually thinking and that she’d like to see some contact and spinouts. Obviously she didn’t want to see anything bad happen but some short track physicality and the occasional spin is always fun.

Obviously, there are some tweaks to be made which I’m sure will be reviewed and implemented. The main issue was that the race ended 12 minutes after its TV window. Normally, this isn’t a big deal but for a series that stressed an importance that their races are meant to fit in a two-hour window, the races should be ending just before 10 pm. That being said, given this is their first test of the format, going over by 12 minutes is pretty good and maybe that’ll be worked on in the coming weeks.

I also would like to see some work being done on the ticker showing the standings. In particular, especially since drivers will have different colored cars each week, the numbers in the ticker should be color coded for the car they’re racing that night. I also noted the lack of a lap counter during timed heat races but that’s not a big deal since it doesn’t really matter how many laps are run.

Overall, this should be a great sign for CBS and the Camping World SRX Series. Providing people with a local short track racing experience is something that hopefully gets people out to their own local tracks. I grew up in an area of the country that’s legendary for its local dirt track racing. Within an hour drive, I could go see a race at Williams Grove, Lincoln, and Port Royal, among many other tracks in the Central PA area. To see the World of Outlaws come in and have the Pennsylvania Posse compete and sometimes beat the best of the best, there’s nothing like it. It’s why I became a racing fan.

The Camping World SRX Series is doing that on a wider scale and the mainstream racing community is finally getting to experience what I have experienced for so many years. Now if I can only convince Tony Stewart to add Williams Grove to the SRX schedule next season, we’ll really be in business.