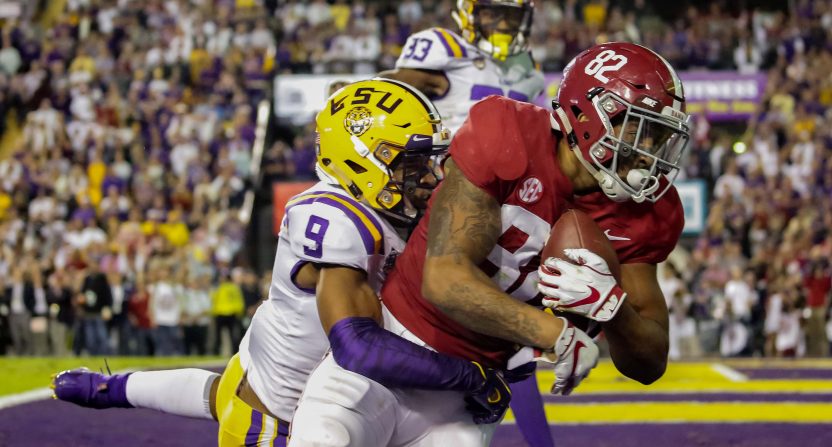 The highly anticipated SEC matchup between No. 1 Alabama and No. 3 LSU may have been a 29-0 Alabama blowout win but a lot of people still watched. In fact, CBS revealed that more people watched Alabama/LSU than any other game so far this season.

For their Saturday night prime time game, Alabama-LSU registered a national 6.7 rating with a 13 share according to CBS. Last year’s game was also on CBS, also on in prime time and on the same weekend as this year. Ratings for this year’s game was up 81 percent over last year.

Considering the Crimson Tide won big and dominated rather early on, it’s likely that ratings would have been even better if the game was more competitive. The fact that ratings peaked closer to halftime than toward the end of the game, there was room to build an even bigger audience. In that aspect, it’s probably a bittersweet ratings victory for CBS but it’s still a good number and will probably remain the highest rated game until the SEC Championship.

Even more impressive is the breakdown of top markets watching Alabama-LSU. The top five rated markets is dominated by SEC country and the numbers are outstanding. Birmingham tops the list with a 52.6/70 with New Orleans behind at 38.3/56. If you were a CBS affiliate in the two home markets, you were really loving the evening. Knoxville (19.8/31), Nashville (18.9/30) and Atlanta (18.7/33) completed the top five.