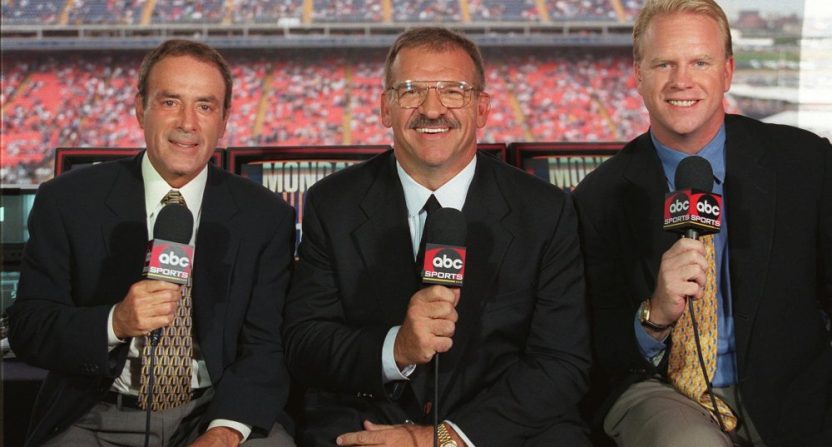 Tony Romo’s move from active NFL player to A-team analyst (with CBS, where he’s replacing Phil Simms on the lead NFL broadcast team) is an unusual one, but a few have made a similar transition before. One is current CBS and Showtime studio analyst Boomer Esiason, who went from playing for the Bengals in 1997 to being in a three-man Monday Night Football booth with Al Michaels and Dan Dierdorf in 1998. Esiason told The MMQB’s Peter King it’s tough to make an adjustment of that scale that quickly:

“It’ll be a trial by fire. It’s dangerous,” Esiason told me Tuesday night. Esiason is now in the CBS “NFL Today” booth, as well on “Inside the NFL” with Simms. “I guess my first reaction is: If I only knew then what I know now. I should start by saying I am really sad for Phil. He is a very close friend of mine. I have the utmost respect for him. … Jim Nantz will be really good for Tony. He knows how to make a guy in the booth feel comfortable, and he knows they’ll be highly scrutinized.

… One thing I would say is, try not to be all things to all people. I just overkilled the first year. I read so much, prepared so much. Have fun. Don’t think you know more about football than everybody you’re talking to. … Social media will be a killer. The slings and arrows, you won’t know where they’re coming from. But they’re coming. It’s Twitter muscle. Alcohol Twitter muscle. But it’s just like being a quarterback. We’re used to criticism. We know we’re going to take shots. It’s part of the job. He has to know that going in. … I hope he can criticize a play call. He has to do that.”

There are some good points in there. In particular, many analysts have talked about over-preparation being a challenge early on, which can lead to them trying to shoehorn in unnecessary points or taking too much time to explain something. King references that later on in his piece when discussing his own early TV days on NBC’s Football Night In America, saying “You’re told you have 45 seconds to bat a topic back and forth with a host or a partner, and if you exceed it by eight or 15 seconds, you’re in deep crap. You might say to yourself, There is no way to explain that in 15 seconds, but it doesn’t matter; that’s what you have.” Romo’s definitely going to have to adjust to that.

Esiason is also right that Romo can’t try to be all things to everyone, and that he can’t take all of the inevitable criticism to heart. And this is one area where Romo’s past may be very useful; he certainly faced plenty of heat from media and fans, much of it unjustified, during his tenure as the Dallas Cowboys’ starting quarterback. That may help him deal with the shots he takes in this new role. And Esiason’s point about Nantz being a valuable resource for Romo is important, too; while Romo will be new to the broadcasting stage, Nantz’s experience should help keep things running smoothly.

The challenge Romo faces is perhaps even greater than the one Esiason faced in going from the field to the booth, and it’s worth keeping in mind that that one didn’t end well at first (Esiason was fired from Monday Night Football after two years). The NFL’s even more prominent today than it was in 1998, and the criticism from fans and media is at a whole new level; there weren’t a whole lot of angry tweets or Facebook posts about announcers back then. Moreover, Esiason was eased into a three-man booth, while it seems that it will just be Romo and Nantz.

It’s also worth noting that while recent playing experience can be helpful, Romo doesn’t have experience facing many of the teams he’ll be covering. King points out that Romo spent his entire career in the NFC, while CBS’ package is focused on the AFC; he’ll have a lot to learn about those teams and coaches. This is one of the highest-profile broadcasting moves in some time, and it will be one of the highest-scrutinized. “Trial by fire” seems like an apt description.