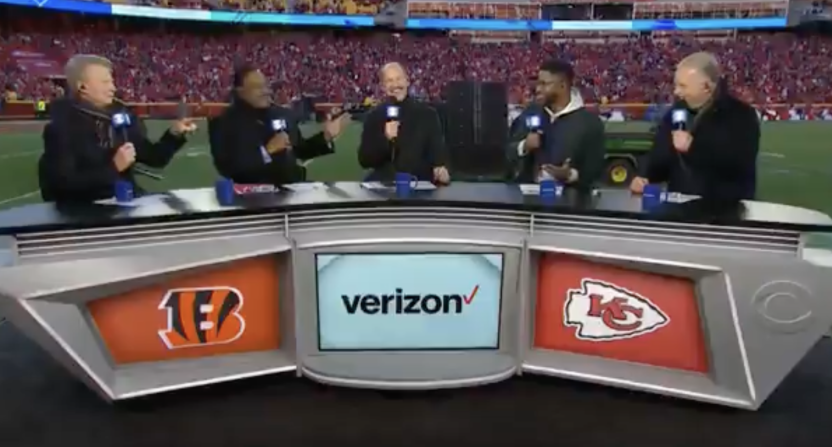 Sunday’s AFC Championship Game between the Kansas City Chiefs and Cincinnati Bengals showcased some offensive firepower and explosive plays. But there was perhaps no moment louder and more confusing than what took place during the CBS halftime show as the NFL hosts struggled to be heard while a full-on musical performance was happening right behind them.

James Brown, Bill Cowher, Boomer Esiason, Nate Burleson, and Phil Simms did their best, but they were no match for that giant speaker positioned directly behind them on the field blaring the sounds of the Applebee’s song guy directly towards them and the cameras.

Esiason certainly seemed to have a sense of humor about the whole thing on Twitter afterward.

Boomer talked about the experience and what it was like to be in the middle of it during his WFAN morning show with partner Gregg Giannotti, saying that he knew going in that it would be loud in Arrowhead Stadium but he had no idea it would be like that. He also alludes to the fact that the wild finish of the first half may have led to a lack of ability for the crew to do anything about the speaker placement in time.

“It’s an amazing end to the first half, Andy Reid’s wrong decision, all that stuff, and then we now have to hustle, or we have to put our ears in, our IFBs (interruptable foldback earpiece) in,” said Esiason. “We have double IFBs on. Double. So that means we are amplified amongst one another so we can hear each other. Becuase we know it’s gonna be loud. And we know there’s a concert going on. But what we didn’t know was they were gonna put the speaker right behind us. Nobody knew because we all had our backs to it.”

“There was a John Deere Gator that dropped that thing off right behind you,” said Giannotti. “Directly in the middle of the desk.”

“I didn’t know that until we get Drew in our ear, our producer in our ear saying ‘Alright guys, thirty seconds. Twenty seconds,’” Boomer said. “This is all in hurry-up mode because we’re coming out of commercial, we’re setting up the set, everything else is going on. And then I hear a faint thing. ‘Joining us now, Waker Hayes’ And then as JB starts reading the prompter, he almost fell off his seat.

Esiason singled out host James Brown for the way he handled the entire situation.

“But the amazing thing about JB, and people cannot appreciate this,” said Esiason, “We know we have 50 million people or whatever watching, and that prompter goes, and this thing almost shoots him out of his chair, and he doesn’t flinch one bit. He follows it…I could never do that.”

“JB was doing sign language to Phil Simms. It was the funniest thing I’ve ever seen,” Giannotti added.

Boomer also noted that for as loud as it all sounded to the audience at home, it was probably even louder for them.

“Now, you have to remember, all of us have IFBs in. So everything is amplified in our ears. So you can imagine how loud these speakers are coming to our microphones, our stick mics, and I mean, it was just, the most unbelievable thing.”

You can be sure the next time the CBS studio team has to do a halftime show on the field, someone is standing behind that stage to make sure no speakers come within 20 yards of them.