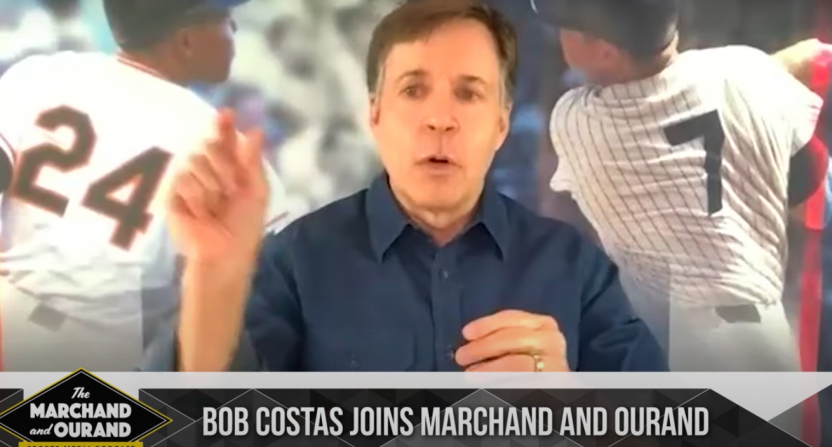 There was a time when American sports fans couldn’t escape Bob Costas even if they tried. Thanks to his longstanding relationship with NBC, Costas was the voice of countless memorable sporting events in the 80s, 90s, and 00s. Costas has been back in recent weeks as part of Major League Baseball playoff coverage for MLB Network and TBS and it’s also given him a chance to appear on various podcasts and programs to discuss all the places that his career that’s taken him, which include just about every major sport, sporting event, and sports interview show out there.

Costas appeared on Wednesday’s episode of The Marchand and Ourand Sports Media Podcast to discuss his career, favorite interviews, favorite players, and more. However, there was one insight that stood out. While Costas and NBC went together hand-in-hand for decades, he was apparently very tempted to leave the network for CBS when David Letterman asked him to become the host of what would become The Late Late Show. And apparently, CBS put in the work to try to help make it happen, too.

“I never mentioned this for 20, 30 years, but I have mentioned it a couple of times because I’ve been asked,” said Costas. “I guess it’s far enough in the rearview mirror, but, when David Letterman left NBC after Jay Leno got The Tonight Show rather than David, and went to CBS, part of the deal was that he controlled the hour after his. That [Letterman’s production company] Worldwide Pants would produce the hour after his. And Later had followed David Letterman’s show and I had been a frequent guest with David and he and I had a good relationship. And he offered me that hour after his, which eventually went to Tom Snyder when I declined.

Costas explained that while he might have taken the offer had it come a little earlier or later in life, that particular moment in time wasn’t right for him or his family.

“At a different crossroads in my life, I undoubtedly would have done it,” said Costas. “But at that time…NBC had a treasure trove of sports riches. I had a very close relationship with [NBC Sports chairman] Dick Ebersol.

“And another factor was the ages of my kids. 7 and 4 at that time, roughly…and the commuting between St. Louis and New York, and, as corny as it sounds, you can say to a little kid, ‘hey, wanna go to the ballgame? We’ll stand by the batting cage, we’ll say hi to Ozzie Smith.’ ‘Wanna go to the Bulls game? Well, we’ll watch Michael Jordan.’ Or ‘lets everybody go to the Olympics.’ It’s a little harder to have a kid’s attitude perk up when you say, ‘I’m interviewing the Secretary of State, wanna come along?’ That was actually part of the decision.”

It’s a fascinating “what if” for the world of American television. If Costas leaves NBC in 1992 or 1993, he misses out on many of the iconic moments and games that helped to define his career, including the Dream Team, Jordan’s championships, The NBA on NBC, The Olympics, Football Night in America, and more. It also means Costas likely leaves sports behind to become more of a news-focused host and broadcaster. Who knows what roads that CBS role would have led to for Costas in the years ahead.