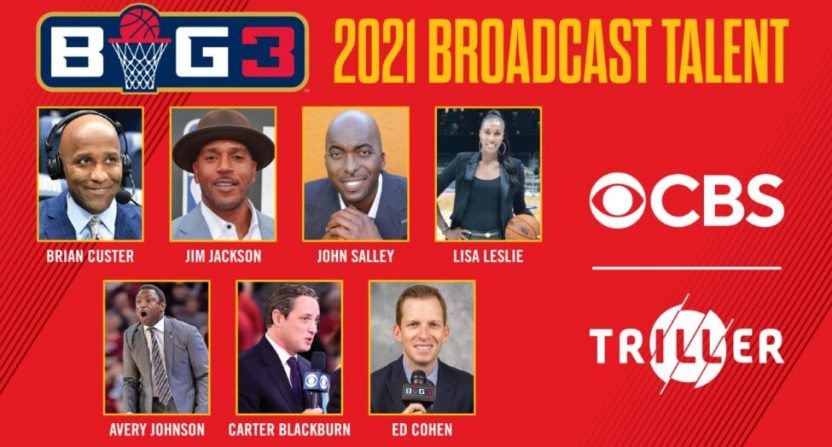 The BIG3’s brand of three-on-three basketball (which, with their particular tweaks, they’re now calling “FIREBALL3”) aired mostly on FS1 (on a delay) in its first year in 2017, then across Fox and FS1 to larger viewership in 2018, and then exclusively on CBS and CBS Sports Network in 2019. The league canceled its 2020 season last May amidst the COVID-19 pandemic (after plans for a quarantine tournament fell through), but at that time, they announced that CBS would remain a partner for 2021. That came to pass back in April, with the league announcing a July 10 season start and a full schedule then.

Now, the league has announced full broadcast details. This year, their games will air on CBS, Paramount+, Triller, and FiteTV. And there are two particularly interesting new names involved, with John Salley as sideline reporter (a role formerly held by Michael Rapaport, which led to some awkward interactions) and Lisa Leslie as an analyst (when she’s not coaching the defending champion Triplets). They’ll join returning analysts Jim Jackson and Avery Johnson as well as play-by-play voices Brian Custer, Ed Cohen, and Carter Blackburn. Here’s more on Salley and Leslie from the league’s release:

“From players to coaches to announcers, BIG3 continues to attract some of the biggest names in basketball. John Salley is a basketball legend, and we know he will bring energetic banter and immense basketball knowledge to broadcasts in his first season with the league. The group’s charisma, passion, and understanding of the game and the BIG3 will lead to a special broadcast and leave fans absolutely entertained,” said BIG3 co-founder, Ice Cube.

Salley consistently impressed fans throughout his 15-year NBA career, in which he became the first player to win four championships with three different teams. Upon retirement, Salley embarked on his illustrious film and television career where he starred in Eddie, Bad Boys, and its sequel, Bad Boys II, as well as held a seven-year stint as co-host of the Emmy-nominated Fox Sports Net show, “The Best Damn Sports Show Period.”

Lisa Leslie has done it all – from her own illustrious WNBA career, success in the BIG3, and broadcast experience on FOX, ABC, and NBC. Lisa will provide expert analysis alongside former NBA player and coach Avery Johnson who holds the title as the fastest coach to reach 50 wins.

It’s certainly interesting to have a coach currently in the league also working as a broadcast analyst. We’ve sometimes seen that for the playoffs in other sports, with coaches whose teams are no longer involved tapped as guest analysts, but it’s notable to have that be the case for a whole season that Leslie will also be coaching in. (And as noted by Daniel Ormsby, Leslie also has previous experience as a CBS basketball analyst, working WNBA broadcasts for that network alongside Lisa Byington this year.) It’s also notable to see Salley returning to a sports role; he’s done a lot in sports over the years, including with “The Best Damn Sports Show Period,” but hasn’t worked in that realm much recently. We’ll see how this new broadcast lineup pays off for the BIG3.

The 2021 BIG3 season tips off on July 10. Full schedule details are available here.