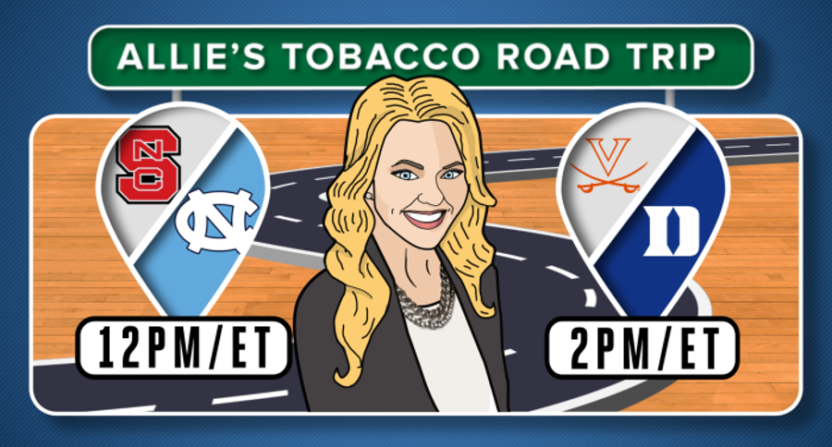 CBS has some excellent college basketball matchups this weekend, including the No. 10 North Carolina Tar Heels hosting the NC State Wolfpack at noon Eastern Saturday and the No. 4 Duke Blue Devils hosting the No. 2 Virginia Cavaliers two hours later.

The Duke and UNC campuses are only 10 miles apart, and that provides an interesting opportunity; Allie LaForce is going to serve as the sideline reporter for both games, pulling off the rare announcing double, and she’ll also document the atmosphere at both schools and the ride between them on CBS Sports’ Instagram. LaForce’s social reporting begins Friday night with video from Duke’s Krzyzewskiville. LaForce spoke to Awful Announcing Thursday, and said the idea sounded like a unique way to cover the two games.

“Steve Karasik, our VP of production, had the idea, and everybody kind of just thought, ‘Oh my gosh, this would be fantastic, let’s roll with it,'” she said. “They gave me a call and just said, ‘If you’re up for it, this could be a really cool opportunity, and something that not a lot of people have done, and showcase not just the great lineup of games that we have in one day, but also a different way to cover it, a different way to build some hype around it, and show the great traditions that these basketball programs have.'”

She said she jumped at the chance to do this.

“One of the best things that CBS has going is our coverage of the NCAA tournament, so all season long, we’re just building up and waiting for that moment and showcasing the great games that we’re able to air during the regular season.  And so, it’s just all-in for college basketball at CBS and I’m so pumped to be a part of it. I mean, I didn’t even hesitate, I was just like ‘Count me in.’ …It was a no-brainer for me. …It’s going to be exciting. It’s going to be good.”

However, even with the relatively-small distance between schools, it may not be an easy transition from one campus and one game to the next. That’s especially true given the tight time window. LaForce said they’ve looked into the logistics heavily, though.

“The biggest challenge of this whole thing is going to be the transportation from one to the other, even though it’s less than 12 miles apart,” she said. “But we have people that work at CBS that went to both universities that have given us a great rundown and idea of what traffic’s like, what the pregame festivities are like and how the logistics will work. So we have a great team that’s on top of it.”

When LaForce leaves the first game will likely depend on what the game situation is. If the game’s out of hand, she may exit with a few minutes left to start the trip, but if it goes down to the wire, she’ll still be there reporting. And while the goal’s to have her at the second game in advance of the tipoff, she said it will still be notable even if that doesn’t work out. 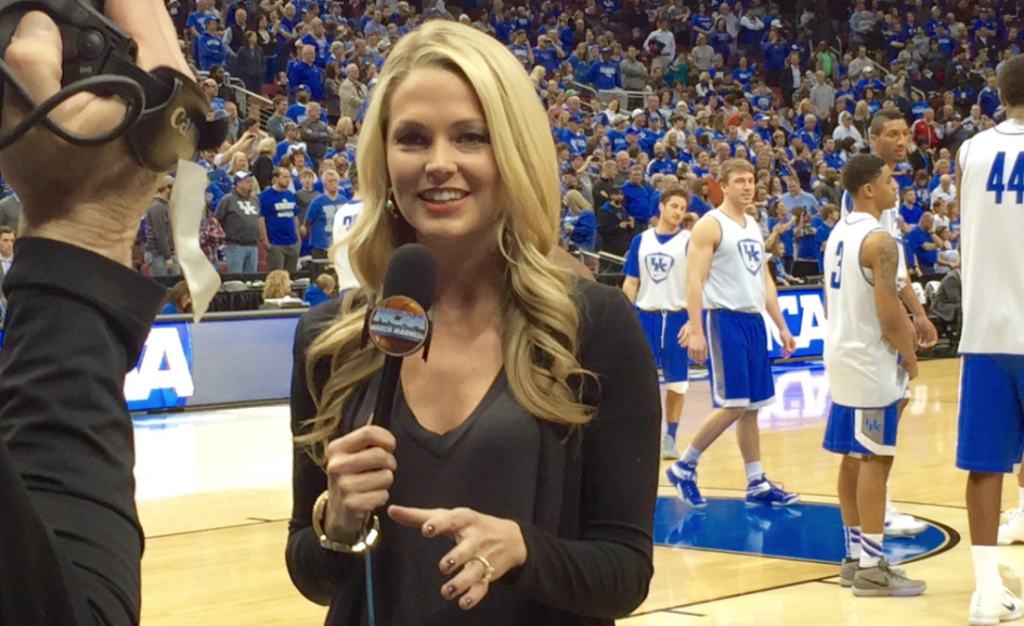 For many networks, the focus is usually on what’s going to be on TV, with digital-only content serving as a supplement to that. LaForce said that’s reversed for her this weekend, though.

“Primarily, I’m covering both games from a social perspective, and then I’m going to be doing the games as a sideline reporter in addition to that. I think that’s how we’re approaching it at CBS, because normally these games wouldn’t have had a reporter. It’s ‘Allie, go to capture the social, capture the fan experience, capture the tradition via social,’ and then ‘Oh, by the way, you’re going to cover the games too.'” I want to do a great job at both, so it’s going to be a lot, but it’s definitely doable. And these programs are really easy and great to work with too.”

LaForce said her goal on the television side is to try and provide insight on how players and coaches are reacting, whether that’s directly with on-air reports or by passing information to the announcers. (Spero Dedes and Clark Kellogg will call NC State-UNC, with Ian Eagle and Bill Raftery calling Virginia-Duke.)

“From a sideline reporter’s perspective, I think they’re incredibly valuable to the quality of the broadcast,” LaForce said. “I say that because the announcers are sitting in their chairs, there are things they can’t hear, things they can’t see in the huddle.

“That’s where we have a huge advantage because we can get up and wander and we don’t just know the personalities of the coaches and players, we can actually see it in action in the huddle. And I think it tells the story of the game. You know, a team could be playing really well but the coach can still be really frustrated with his team, that tells you a lot about his expectations for the team. It tells you what areas of the game the coaches think they’re doing well or struggling at. Even if I’m not reporting on the air, I can be sharing that information with the announcers, which helps their quality of the broadcast too.”

On the social side, LaForce wants to really make the experience come through for fans at home, and for college basketball fans in general, not just fans of these programs.

“I’m excited, because we live in a social world now; that’s how people get their information, that’s how they get their news. It’s also where they find excitement and how they showcase their passion for sports and live through the sporting experience if they can’t be there, so hopefully I can be there for them and they can feel like they’re living both of these experiences through me.

“I hope we can create some memories and some laughs, and also give some great information to the fans out there. And not just Duke or North Carolina or NC State or Virginia fans, but just to college basketball fans in general who can appreciate a good rivalry and a good tradition.”

She said the storied history of these programs and the fan intensity around them should make for compelling content, both digitally and on television.

“I hope I can share not socially, but with the television audience as well, to give them perspective of what college basketball means to these programs. You look at North Carolina and Duke, and you talk about the rivalry, and even though they’re not playing each other this time, it’s one of the greatest rivalries in all of sports. In college basketball, maybe it’s Michigan-Michigan State, maybe it’s Louisville-Kentucky, maybe North Carolina-Duke, but it’s in the top three or four, and that’s because of the close proximity, which I’m going to be showcasing.

“It’s also three of the top 10 teams in the nation right now. And people forget too, NC State-UNC used to be the biggest rivalry in the 80s, it was just so long ago that most college basketball fans don’t remember now, but when Roy Williams was an assistant at North Carolina, NC State was the team to beat. It’s more of a rivalry now for NC State than it is for UNC because they’ve dominated it for so long, and NC State may not be in the Top 10 while these other three teams may be, but they still view it as a rivalry. … It’s also because of the fans, so I hope to share some of the greatest rituals, the greatest traditions in college basketball as well, which I’ll also experience firsthand..”

She said the social side’s going to be fun to do, as it’s a significant change from how many broadcasts have traditionally approached digital coverage of college basketball.

“I think it’s a different way to look at it. When we try to capture the behind-the-scenes with social media, it’s like, ‘Hey, we’re in the production meeting,’ or ‘Hey, here’s the coach, hey, here’s the players, this is them in the film room.’ That’s all been done. But I don’t know that anyone’s tried to capture, especially socially, these two traditions and the trek in between.” 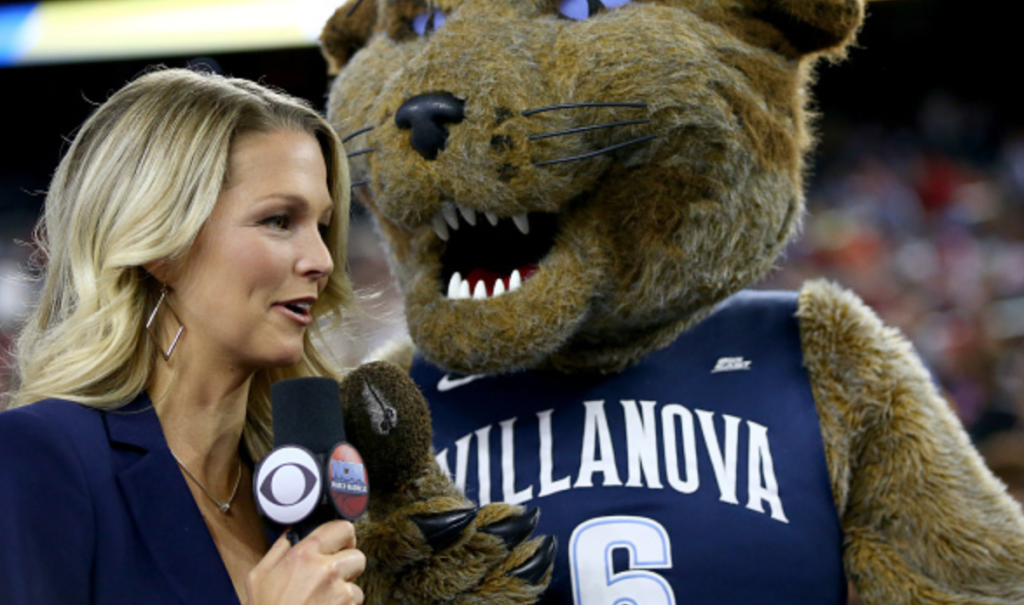 LaForce said she’s also been putting in a lot of research and speaking to people from each team in preparation for her sideline reporting work.

“During the NCAA tournament, we have four games in one day, so we’re literally preparing for eight teams, so that gives us such good training for this. Right before we hopped on the phone, I was on the phone with Virginia’s sports information director, and I’ve been talking to the different SIDs all day. They make it really easy; I’ll talk to some Virginia players on the phone tonight, tomorrow hopefully I’ll go to Duke’s practice, UNC’s practice, and I haven’t talked to NC State yet, but I’ll figure it out with them. So it’s a mix of just being on the phone, doing research, and also showing up and talking to these coaches and players in person. I wouldn’t say it’s challenging, it’s just like any job in sports; put the research in and you’ll be fine.”

She said she’s thrilled to get the chance to do this unique trip, and cover these games both digitally and on television.

“I just think the intensity and passion of this Saturday is really rare, and I can’t believe that we’re doing this all in one day. It’s going to be so much fun.”