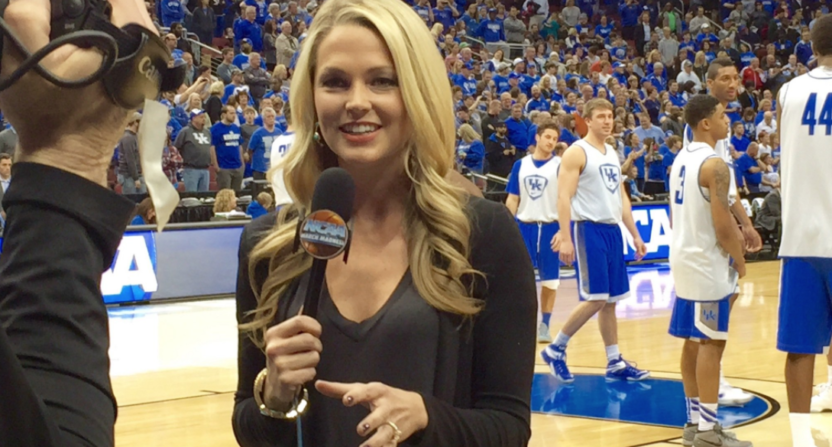 Well, this is a bit of a surprise. According to The Athletic’s Richard Deitsch, longtime CBS sideline reporter Allie LaForce is leaving the network after the two sides were unable to agree on a new contract.

CBS Sports plans to name Jamie Erdhal as its new SEC on CBS reporter today. Told CBS and Allie LaForce could not come to a new deal and LaForce is leaving CBS Sports. LaForce had been with CBS Sports since October 2012.

As Deitsch notes, LaForce has been with CBS for a long time, and has been the sideline reporter on CBS’s flagship SEC on CBS college football broadcast since 2014, in addition to performing sideline duties for college basketball broadcasts, including the NCAA Tournament.

There’s one report that has LaForce moving to Turner:

Update: A source tells Awful Announcing LaForce and Turner are engaged in conversations, but no deal is signed yet.

As for CBS, they initially released a statement that didn’t address LaForce, but did confirm Erdahl as her replacement:

CBS Sports has named Jamie Erdahl lead reporter for its coverage of the SEC ON CBS. Erdahl joins Brad Nessler and Gary Danielson as the network’s top college football broadcast team to call the “SEC Game of the Week” beginning this season.

“We are excited to add Jamie to our SEC ON CBS coverage,” said Harold Bryant, Executive Producer and Senior Vice President, Production, CBS Sports. “Since joining CBS, Jamie has established herself as a talented, versatile and knowledgeable reporter. She is a rising star and someone we know that will connect with and earn the respect from the coaches, players and passionate fans in the SEC.”

#WKEN: Statement from CBS Sports on Allie LaForce's departure: "We could not reach an agreement on a new deal and have parted ways. We thank Allie for all her contributions over the past five and half years and wish her the best."

This is so amazing. I couldn’t be more excited to join the entire @SEConCBS crew! Can’t wait to work with Brad & Gary — my saturdays just got better. Let’s get to work! ?? https://t.co/TICxocU49P

Jamie is obviously very good at what she does, so this is a welcome promotion for her; she’s also been at CBS for a relatively long time, starting in 2014.

Erdahl joined CBS Sports in 2014 and has served as a reporter for THE NFL ON CBS as well as the NCAA Tournament and regular-season college basketball on CBS Sports and CBS Sports Network. She has also been an anchor for CBS Sports HQ, CBS’ 24-hour streaming sports news network.

LaForce will certainly be in demand elsewhere; her experience covering multiple sports on a top network practically guarantees that. She’ll likely have her pick, and could also have the leverage to look for studio work, if she prefers that to sideline coverage. So, congratulations to Erdahl, and good luck to LaForce. Games are better when either of those women are working them.