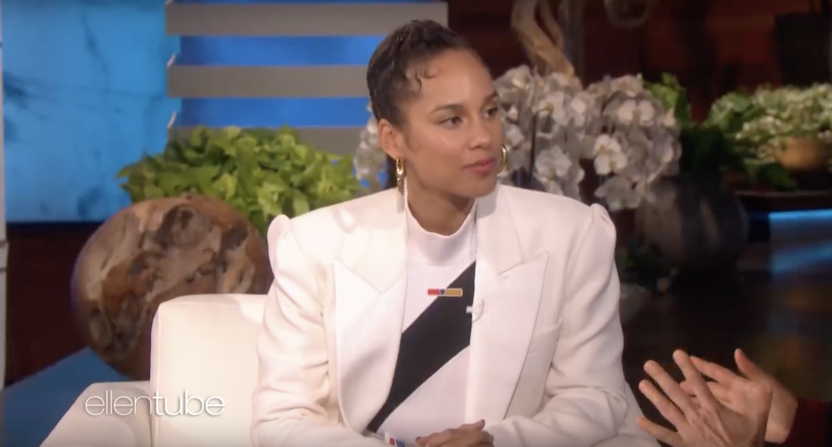 Alicia Keys hosted the Grammy Awards last year and did such a great job that she was invited to host the 2020 edition. Hosting an awards show, especially one with so many performances as the Grammys, can be very difficult and requires an intricate organization and preparation plan to put on a great show. And then just hours before Keys and everyone were set to be on stage at Staples Center, everything went into chaos as it was reported that Kobe Bryant, his daughter Gianna, and seven others had been killed in a helicopter crash.

How do you pivot so suddenly to honor someone who unexpectedly passed away in such a tragic way? The show began with Keys forgoing the original plan and singing “It’s So Hard to Say Goodbye to Yesterday,” with Boyz II Men. It was a moving tribute to the man who played so much of his career in the very arena the Grammys were taking place.

On Wednesday’s episode of The Ellen DeGeneres Show, Keys sat down with Ellen to discuss hosting the Grammys and honoring Bryant.

“Well, I mean, we were all freaking out because obviously hearing the news about Kobe and his daughter was so tragic. And none of us can still believe it right now to this day. So I think that it was definitely a crazy feeling, because literally minutes before we were going to do something else, and we had to really figure out how could we properly honor him in his house on this night.”

“And everybody who adores him and loves him so much has been inspired by him. And it felt so devastated in that moment. We couldn’t — we had to properly do that. So I think that I was literally backstage, I put on my meditation music. I just was thinking, and I called some of my closest people that helped me really find the truth in the moment.”

“And it just so happened Boyz II Men was there already that night and we wanted to do something special, create just something that felt like it was the right thing. And we pulled it together. And it was just beautiful. It was like that magic that happens when it’s necessary. And so, out — whoa, like, whoa — it was so much. But I was very honored to be able to share that moment with all of us — with the entire world — that we together could go through something that hurt so bad, together. And I feel really honored to have been able to be there with you in that time.”

Ultimately, what Alicia Keys and Boyz II Men did was that when you’re in doubt of what to do to honor someone you care about, speak from the heart. Tributes to Kobe, Gianna, and everyone who died were made throughout the Grammys broadcast as well as everywhere else within the past few days. While it wasn’t what she was expecting to do, Alicia Keys did a wonderful job spending a few hours helping get us through a very tough time.