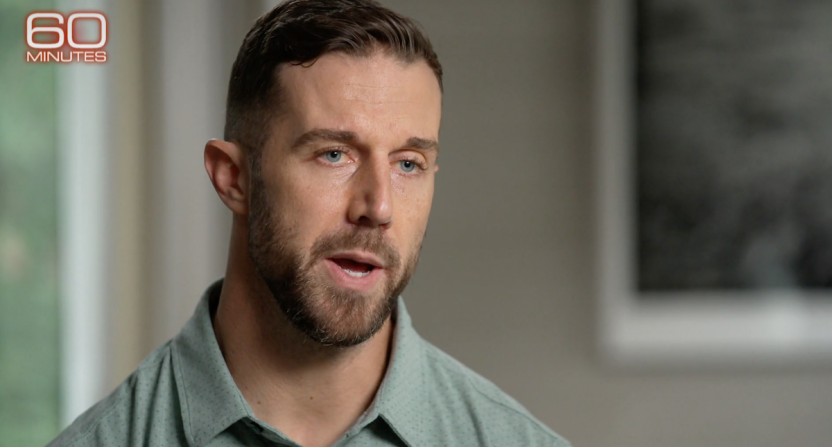 Following the Chiefs’ 22-17 victory over the Browns on CBS, most football fans likely switched over to Fox for the Buccaneers-Saints matchup. But CBS wasn’t done with football for the evening, featuring Washington Football Team quarterback Alex Smith and his comeback from a broken right leg that nearly required amputation on a report for 60 Minutes.

Those who watched ESPN’s E:60 feature on Smith last May won’t learn much new here. Stephania Bell’s report went into far more detail, devoting an hour to Smith’s injury, his multiple surgeries (with unsettlingly graphic images), his rehabilitation, and recovery.

Yet one key difference in Norah O’Donnell’s 60 Minutes piece is that it talks to Smith and his wife, Elizabeth, after the 2020-21 NFL season, during which Smith almost inexplicably appeared in eight games. Also interviewed are physical therapist Johnny Owens and Dr. Joe Alderete, both of whom worked with Smith extensively at San Antonio’s Center for the Intrepid, where wounded soldiers rehabilitated and recovered from significant injuries suffered in combat.

“I’m not crazy,” Smith told O’Donnell. (The full transcript of the report is available at CBSNews.com.)

“I wasn’t gonna do this if I didn’t, you know, obviously hear from the experts. […] Do I really wanna do this? Do I put myself out there, walk across those white lines potentially again in live-action?”

Making his season debut in Week 5, he started six games after Kyle Allen was sidelined for the rest of the season with a dislocated ankle and Washington benched Dwayne Haskins. Washington compiled a 5-1 record with Smith starting, successful enough to win the NFC East (at 7-9) and qualify for the playoffs. He completed 67 percent (168-of-252) of his passes for 1,582 yards, six touchdowns, and eight interceptions.

Considering the circumstances and the significant risks involved — Smith referred to his entire procedure as a “limb salvage” — it was a magnificent performance.

CBS also posted bonus footage online for a “60 Minutes Overtime” segment, in which Elizabeth Smith talked more about what she was thinking when Alex talked about attempting to play again in the NFL.

“Early on, I was supportive. I realized he needed something to work towards,” she said. “As far as our lives 10 years from now, I wanted to know that he was mentally, emotionally, and physically back to where he wants to be. I know that football is his love, so why not let him pursue that, never thinking in a million years that we would actually be on that front doorstep in making that decision.”

Smith also recapped taking his first hit, getting sacked three plays into his return to the field.

“Getting tackled, it was something I didn’t know I’d ever be able to do again,” said Smith. “To know I could take it was, for me, a big step both physically and mentally.”

Smith missed the final two games of the regular season and Washington’s wild-card playoff game due to a bone bruise injury to his right leg that sounds more concerning with his condition than it might otherwise. That could determine if he plays next season. He has two years remaining on his contract worth nearly $40 million, though they’re not guaranteed.

Whether or not Smith can realistically play 16 games (or more if Washington makes the playoffs) over a full season is a valid question. Perhaps the best thing for Smith is to be a backup quarterback, one whom the team knows can come in and play well if needed. Regardless, coming back from nearly having his leg amputated to playing NFL football again is a remarkable achievement.