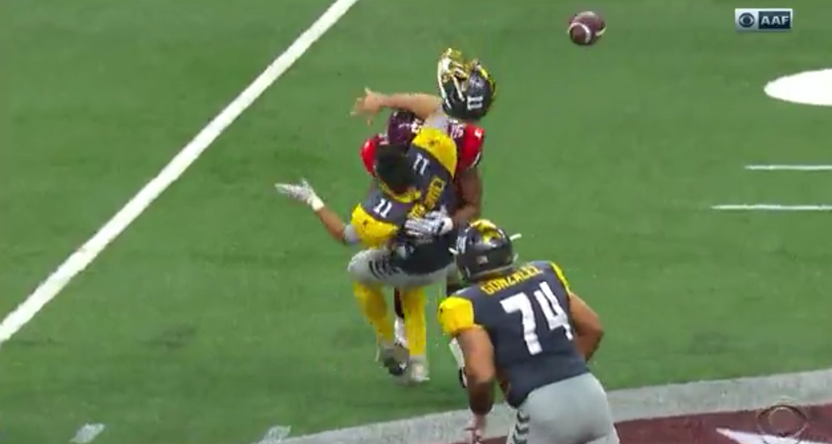 With more and more discussion about the impacts of head hits in football, announcers have to make some choices in how they talk about those hits, especially when it comes to praising players for staying in after a tough hit versus wondering if they should be evaluated for a concussion. On one of the games in CBS’ inaugural Alliance of American Football broadcasts Saturday night, announcers Spero Dedes, Tiki Barber and Trent Green seemed to put much more focus on the first part of that. San Diego Fleet quarterback Mike Bercovici (who previously played at Arizona State, and had brief NFL stints with the Chargers and Cardinals) got lit up on a hit from San Antonio Commanders linebacker Shaan Washington and lost his helmet:

On the next play, there was a lot of praise for Bercovici for staying in the game:

“Guys, I just can’t believe Bercovici was able to stay in the game. Just incredible. …And how about Bercovici showing some toughness, just getting back on his feet after that hit.”The Fleet would punt on their next down. The commentators then announced that the hit was legal, before a throw to commercial where they mentioned the possibility of a sideline evaluation while again showing the hit:

“Player safety certainly at the forefront of the officiating side of the Alliance, and they will definitely take a look at Bercovici to make sure he’s okay on that Fleet sideline.”Bercovici would stay in the game, so if there was an evaluation done, he presumably passed it. But it was interesting (albeit not unprecedented) to see so much praise for him for staying in on that next play, and no suggestions of any sideline evaluation until later. And, at halftime, Kurt Warner had more praise for Bercovici’s toughness:

In the NCAA, losing your helmet other than directly thanks to a foul means you have to sit out a play, but the AAF’s gone another route here. And the commentators definitely didn’t have an issue with it.