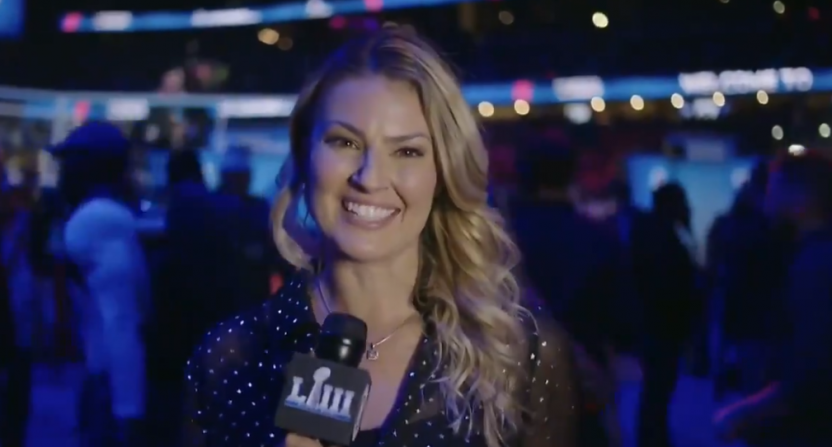 CBS Sports reporter Amanda Balionis is probably most known for her PGA Tour coverage, but this week she’s in Atlanta as part of CBS’s wide-ranging Super Bowl coverage.

Amanda will be the face of the CBS Sports social media team, bringing us looks at everything from Atlanta stories to how the NFL on CBS crew prepares for their biggest broadcast of the year, and she was kind enough to talk to Awful Announcing about the week ahead.

Are you excited to work the Super Bowl coverage this week?

Is that not the coolest thing ever?

I am so excited. First of all, it’s amazing to even be a part of Super Bowl coverage in any capacity. But to be kind of the first person to bring a 360° social media view to this week for CBS is going to be really fun. To build what that looks like with our social team at CBS, with our TV crews, I think we’re going to bring a different perspective that our CBS audience hasn’t seen before on social media.

Atlanta is obviously a fun city to do this in. Do you have any local features in mind?

Atlanta is amazing, right? I have a huge affinity for animals, so the first thing I thought was we have to go to the aquarium. We’re going to be shooting there with some sea lions and seals, which I’m very excited about. We’re also going to the Atlanta Humane Society, and bring exposure to one of the biggest shelter that helps out animals. They adopt out a crazy amount of animals every month, so we’re going there for a shoot. And obviously one of the big storylines is going around Atlanta and showing people how big the Super Bowl is, not just on Sunday. This starts on Monday, and there are so many concerts, and live events, and the Super Bowl live set.

And the crossover in Atlanta between music and sports is a story that can’t be told enough. It is so prevalent there. That’s the big goal, telling people all of the great things about Atlanta, what a great sports town it is, and showcasing some really fun things while bringing awareness to some things about the city people maybe hadn’t seen before.

Is there anything you’re most looking forward to?

I’ve never been to a Super Bowl. I’ve been around the Super Bowl, so I kind of understand what it looks like during the week because a few years ago the Phoenix Open and the Super Bowl overlapped in Phoenix, so I got to experience what those events look like, what the parties look like, the enormity of how many people are there.

But I’m really excited to go to the actual game and show people behind the scenes what’s happening on the sidelines at the game. I do sideline reporting for college and some NFL games, but I think to be able to showcase what Tracy Wolfson is doing throughout the entire game. Not a lot of people really understand what that looks like. Showing people a little peek behind the curtain for the production of the Super Bowl. Being able to show people how Tony Romo prepares, how Jim Nantz prepares, this is what these meetings look like.

I love what I do and I think what I do is the coolest job in the world, and a lot of that stuff no one ever really gets to see. I’m really excited to be able to tell that story to our entire CBS audience.

That kind of stuff is obviously very interesting to our audience! Getting to see what Tony Romo does to prep, especially now as his stardom has blown up even more and has become a storyline in itself.

Maybe we should do a segment with him on how many plays he thinks he can predict and then do a live counter during the game.

That would be great! There’s probably a prop bet out there for that right now.

There probably is a prop bet! I just think when you’re in media, doing these things week in and week out, you can kind of lose sight of just how unique the job is. I remember my mom was traveling with me during Thanksgiving week. I had a college game on Thanksgiving day, and we flew on Friday morning to the Ravens-Raiders game I was doing in Baltimore.

So she sat there and listened to all of our conference calls on speaker, and she was fascinated by the process and how it all works. It gave me a new perspective, that this might be really cool for people to know about. How we go about preparing for a game all week leading up, and how that’s applied on gameday during the broadcast.

I’m most excited about being able to tell that story not just from a sideline reporter perspective, but from arguably the best that has ever done this, Jim Nantz, and then Tony Romo whose stardom has absolutely taken off, deservedly so.

About to watch how it’s done as @JamieErdahl & @EvanWashburn cover Opening Night live on @CBSSportsNet …I’ll be chiming in on social and with player interviews tonight as well! Honestly just posting this as proof that I’m not dreaming ?‍♀️ pic.twitter.com/1iY22TlgG4

I write a lot about golf, and I tend to ask this to people who cover the sport: what do you think are the challenges of broadcasting golf versus broadcasting a football game?

I think golf is ultimately the most challenging sport to cover. At any given time, there are a hundred balls in the air at once, sometimes on multiple courses. It’s impossible to cover every single shot and get every single story at the right time because there’s so much going on. As opposed to football or basketball, where there’s one ball, one play at a time. I’m not saying it’s easy to produce a Super Bowl, but it’s definitely a different challenge than golf.

Golf is so unique in the aspect that no one’s waiting for you. There are no TV timeouts, there are no commercial breaks where everyone stops playing. We go to commercial and guys are still playing, and then you have to catch up to that while catching up to the live shots. I think it presents a different challenge than any other live sport.

The coverage tells the story in golf more than in other sports in terms of what the viewers get to see, so that’s a big responsibility.

Yeah, it is. It’s deciding what you’re going to show. Are you going to show Tiger missing his birdie putt, or are you going to show a young guy making a long eagle putt that maybe no one’s heard of, who maybe isn’t at the top of the leaderboard. There are so many split-second decisions that our guys have to make, and I respect them so much because in my opinion they have the hardest job in sports. It is so difficult to do what they do at the level they do it consistently, week in and week out, and I think they do a tremendous job.

As a longtime viewer I do sometimes get frustrated, but I try to remember that it’s much easier for me to tweet about it than to do it.

That’s everybody. When you’re sitting on your couch, it’s so easy to say “Why didn’t we see that live?” or why didn’t we see A, B, C, or D. Well, you come into the truck and see that there are eighty other things going on at the same time. I don’t think there’s a right or wrong decision. Our producers have been doing this forever. They know what they’re doing, and you just have to trust that what we’re showing you is the best we can possibly do.

You’ve been a longtime contributor to golf coverage, you’re obviously doing the Super Bowl this week, you’ve worked NFL games, and college sports as well. Is there anything you’d love to do in broadcasting you haven’t done, or a specific event you’d like to cover?

It’s hard to say because I’m still on cloud nine that I’m getting the opportunity to work a full golf season with CBS, and do NFL and college games! All of it is the dream job. Honestly, the Super Bowl was probably the number one thing on my list. So not right now!

That sounds terrible, doesn’t it?

I don’t think so, you have to enjoy your moments. You’ve accomplished a major goal, that’s a good thing!

I am just taking it all in. I have to wake up every day and be like “Dude, you are living exactly what you said you wanted to do starting in seventh grade.”

How many people get to say that? Just reminding myself to be appreciative of the people I get to work with and the job I get to have. I don’t even think I’m allowed to call this work.

Last thing, I wrote about your incident with the bird and Justin Thomas last year, so hopefully your animal features go better in Atlanta.

I just talked to him! He was like “You ready for the second edition of the bird attack?” I said if that never happens again it will be too soon.

I thought you handled it well though!

Did I? Because I literally tried to sacrifice him as tribute.

Exactly right. Self-preservation is the key.

People would have been so mad at me if he’d have gotten injured. He’s definitely the more important one.

I think you did exactly what I would have done, but I don’t know if that’s actually the right way to do it.

When it’s live TV you kind of just have to embrace those moments!