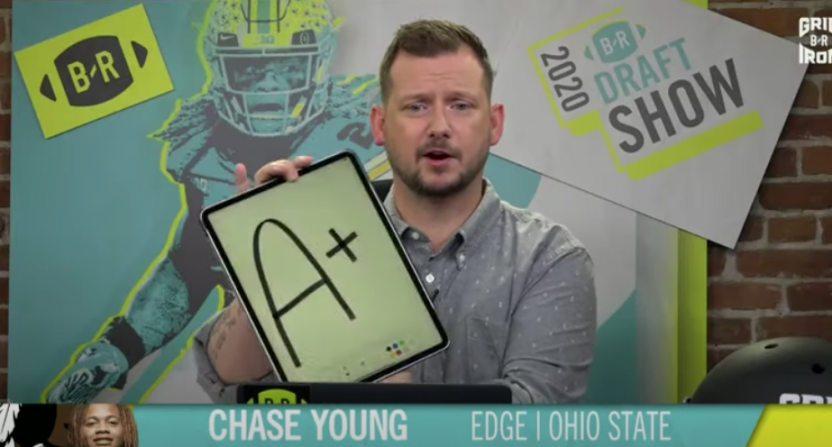 Awful Announcing has learned that popular NFL Draft scout and insider Matt Miller will be soon leaving Bleacher Report. The decision is reported to be mutual, with Miller interested in exploring other opportunities and perhaps even his own venture. However, several sources conveyed that Miller went into contract extension talks with an open mind but quickly became disenfranchised with how those discussions trended. Things seemed to fall apart when Bleacher Report floated the idea of Miller broadening his coverage to include baseball, a sport he has not covered (and none of his 250,0o0 twitter followers follow him for), but a sport that Turner has broadcast rights for. Miller’s pending departure is believed to be announced in the coming days, with Miller being a free agent after the Super Bowl. It remains unclear Miller will continue writing for the site once the announcement is made. Bleacher Report confirmed the news but has yet to provide an official comment.

In other company news, Miller is not the only high profile departure from the company that has yet to be announced. Chris Nguyen, the company’s long time Head of Product, is also leaving the company and going to Google. Between Nguyen and Miller, that’s nearly two decades of experience at Bleacher Report, an eternity given how old the company is and how much churn the company and the industry as a whole sees.

Bleacher Report, now under AT&T’s ownership, has has a very choppy 2020. Over the last few months, Bleacher Report’s CEO has left the company, B/R Mag (the company’s long form division) was shuttered, and sizable layoffs have been planned for their UK office. While Bleacher Report and its new ownership have been conveying that Bleacher Report isn’t a shrinking priority and to expect growth in other areas of the company sometime soon, it’s hard not to look at recent news and connect the dots of where this seems to be going.

Bleacher Report’s departing CEO has not, and will not, be replaced. The company is headquartered in New York, with a large presence in San Francisco, but is currently overseen by, Turner Sports President Lenny Daniels, a long time television executive who is based in Atlanta. Primarily minding the shop in New York is Sam Toles, a 2019 hire from MGM who has yet to really be embraced, which is not much of a surprise given how things have trended lately.

The elephant in the room is that AT&T and WarnerMedia are each looking to cut costs through layoffs and selling assets, given their high debt load. Just last month, I wrote about HBO’s elimination of the HBO Sports division. Meanwhile, both DirecTV and Bleacher Report are among the many companies under the massive AT&T umbrella that are being whispered about as potential sale targets.

What’s clear is that Bleacher Report, and the company as a whole, is dialing down its ambition and narrowing its focus. Written content seems to be something the company is less inclined to pay for, especially if it’s not reinforcing a sport Turner has rights for. This explains the cuts to the UK office, as Turner bailed on its Champions League deal with more than a year left, months after losing the next round of rights to CBS Sports.

Despite its origins as a low quality content farm flooded with slideshows, Bleacher Report did evolve into a quality sports portal. The site’s tentacles reached across written content, a quality app, long form video, social media, podcasts, and newsletters. Miller was a key part of that transition as the first paid writer and the site’s most well read writer, both historically and year to year. If current management didn’t prioritize making a strong effort to retain him (which didn’t include covering baseball for shits and giggles), that’s not a great sign for anyone else who is primarily writing for the company and wants to stay.

Bleacher Report seems to be content dialing back the topics it focuses on as long as social media efforts remain strong. One source went as far as to say “Turner now believes Bleacher Report is nothing more than a digital marketing tool to drive interest to watch sports on TV.”

While my consumption of Bleacher Report content has been modest to minimal over the years, I’ve long been a follower of Miller and enjoyed his work, despite getting stuck with David Montgomery in three leagues last year.  I’ve also admired his longevity at a company that has changed so much over the years. He’s worked with and for so many people and has consistently been an asset for the company. That’s now coming to an end, and while it may end up working out well for Miller, I’m not sure that will be the case for Bleacher Report long-term.