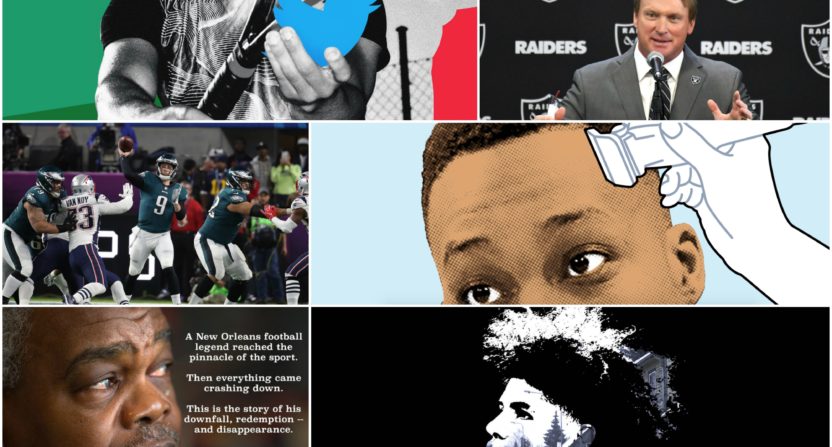 Without further ado, here’s the best in sportswriting from the month of February.

Inside the art of the dunk; by Jonathan Abrams, Bleacher Report

This isn’t quite an oral history, but it’s something arguably better. It’s a beautifully designed multi-media examination of the dunk’s evolution through the eyes of some of the highest fliers in NBA history, with Vince Carter in the starring role.

(And by the way, Jonathan Abrams’ oral history of The Wire is a must-read for anyone who loves that show.)

Column of the month:

You’ve probably read a lot about the NFL’s head-injury crisis, but you probably haven’t read anything quite like this. It’s a really remarkable piece that will make you once again question what it means to be a football fan.

“I’m like the brother that just got out the pen.” — Nick Young on joining the Splash Brothers.

“His dad was talking sh*t so I took him out early.” — Luke Walton, on why he pulled Lonzo Ball in the first quarter.

In Oakland, Jon Gruden Is Ready to Grind; by S.L. Price, Sports Illustrated

Come for a compelling profile of one of the most interesting men in the NFL, stay for the description of Jon Gruden’s crazy book/movie/play idea.

My taper’s keeper: Inside the world of NBA barbers; by Haley O’Shaughnessy, The Ringer

The world of NBA haircuts is more interesting that you would have likely ever thought.

Why Mark Appel, perhaps the biggest bust in MLB history, is stepping away at 26; by Joon Lee, Bleacher Report

Bleacher Report pulled off something we don’t see much anymore: a strong scoop within a well-executed feature.

A play call for the ages and a (backup) QB that amazes: How the Eagles won Super Bowl LII; by Greg Bishop and Ben Baskin, Sports Illustrated

It will never not be amazing how Sports Illustrated turns around brilliant multi-thousand-word post-Super Bowl features in time to close the magazine a day after the game. This piece artfully melds stories on Nick Foles, Howie Roseman, Doug Pederson, Vince Papale and more.

She killed 115 people before the last Korean Olympics. Now she wonders: ‘Can my sins be pardoned?’; by Chico Harlan; Washington Post

This story on a former North Korean spy who once bombed an airplane in an attempt to sabotage South Korea’s Olympics isn’t really about sports, but it’s close enough. Most importantly, it’s really good.

This piece on a Super Bowl scavenger hunt that included black magic and the tireless pursuit of a mini-fridge is also not really about sports, but it is extremely clever and fun.

Darko Grncarov convinced the world, including Serena Williams, that he was a budding star, becoming a progressive hero in the process. In reality, he was an amateur and a conman.

Of all the things written about the Ball family over the past year, this might be the realest. It’s a behind-the-scenes look at LaMelo’s expedition to Lithuania that makes the whole production look not glamorous but in fact downright sad.

Inside the Corrosive Workplace Culture of the Dallas Mavericks; by Jon Wertheim and Jessica Luther, Sports Illustrated

This expose, which revealed a culture of sexual harassment at Dallas Mavericks offices, sparked a vital conversation about workplace misbehavior in sports and led directly to a new NBA hotline.

This piece went viral and for good reason. It’s a remarkable, highly personal story of a onetime football hero who spiraled into addiction and was lost, found, lost again and… we won’t spoil the ending.