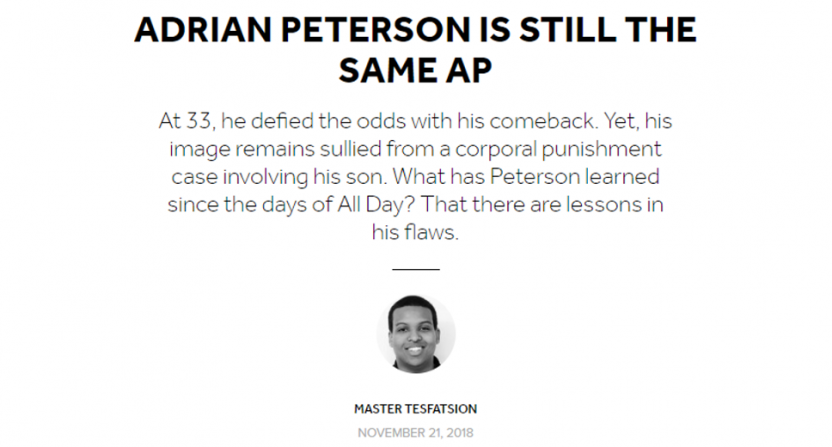 There have been several long athlete profiles published by Bleacher Report recently, and many have been quite well-received. The one on Washington Redskins’ running back Adrian Peterson they put up Wednesday was anything but. Written by Master Tesfatsion, who joined B/R from The Washington Post last December, the almost 4,000-word piece titled “Adrian Peterson is still the same AP” took a whole lot of online criticism for its portrayal of Peterson. In particular, it was blasted for what seemed like attempts to show that Peterson “had learned” from the 2014 corporal punishment case that saw him indicted on felony charges of reckless or negligent injury to a child and eventually pleading no contest to a misdemeanor charge, and for burying quotes that say he still hits his children with a belt and a switch.

Update: Peterson’s agent has now weighed in…with a statement criticizing “The” Bleacher Report for bringing up the 2014 case at all?

A statement from agent Ron Slavin regarding Adrian Peterson: pic.twitter.com/TK26Xqkhbm

Well, that’s a weird one. If Adrian’s “trust with this reporter was violated when he discussed what happened four years ago,” why did Peterson not simply say “no comment” to those questions instead of discussing that in detail? And why would Peterson’s agent complain about this piece, considering that it’s perhaps the most favorable treatment of that situation he could possibly expect? In fact, this statement maybe makes B/R look even worse, as it makes it clear this was pitched as “a story about his resurgence on the field,” not anything addressing these issues. But most of the criticism of this story is because it didn’t really address these issues. That’s discussed in our original piece on this, which continues below…

The piece’s subheadline is “At 33, he defied the odds with his comeback. Yet, his image remains sullied from a corporal punishment case involving his son. What has Peterson learned since the days of All Day? That there are lessons in his flaws,” which definitely seems like it’s trying to tell a redemptive story. And that’s the overall impression it gives; the first six paragraphs are solely about him on the field, and while the seventh says “His larger-than-life image on the field remains sullied by his actions off it, the result of a high-profile corporal punishment court case involving his son in 2014,” the story quickly jumps to Peterson saying “I’ve also experienced some trials in life as well that your typical athlete probably doesn’t go through. …It lets them know that, hey, we’re human too.”

The story doesn’t address the corporal punishment case again until eight paragraphs later, after discussion of his high school and pro careers and the 2013 death of his two-year-old son after an assault by the mother’s then-boyfriend. And when it does bring it up, it does so in some questionable ways.

When he spanked his then four-year-old son with a “switch,” a flexible branch used for corporal punishment, he didn’t know he would become the face of a national conversation about how to discipline a child. He was just doing what he thought was right. He had grown up in Texas being disciplined in a similar manner. The switch was long with ridges, and Peterson—who was 6’1″ and 220 pounds at the time—was a man of tremendous strength. (He once displayed his trademark death-grip handshake on Jimmy Fallon in 2013.) The lashings left numerous cuts and bruises on the child’s legs, back, buttocks, ankles and scrotum. (Photos would later be released and go viral.) But according to Peterson, the child didn’t move or cry during the whupping.

“My kids are different,” Peterson says. “They have my blood in them. They have my genes in them.” As unbelievable as a child not flinching from being beaten by a professional football player might sound, Peterson says that his kids possess extraordinary strength: “It’s crazy when you think about it. But for me, it’s not. I know my kids. I know what they’re capable of, and I know the types of things they do.”

Yes, that’s a discussion of an incident that led to criminal charges with only Peterson quoted about it, and no discussion of this from the child’s mother, or law enforcement, or researchers on the effects of physical discipline. And “go viral” is a questionable choice of words for what happened with those particular photos. But don’t worry, the story then tells us Peterson felt bad, even if he was still convinced he did the right thing.

Peterson didn’t, however, realize how badly he had marked up the child’s backside. “When I turned him around and saw it, no one knows how horrible I felt inside because I left marks on my son,” Peterson says. He flew the child back up to Minnesota, where his mother lives, for a doctor’s appointment on Monday. She warned him how the doctor could raise questions about abuse. “Them people are going to try and press charges on you,” Peterson remembers her saying.

Still, he believed in the necessity of what he had done and didn’t think much of what others might think. “That was pride,” he says. “My pride was telling me I just disciplined my child for what he done wrong.”

Uh huh. The piece then goes on to talk about reported numbers of parents who spank their kids and corporal punishment being allowed in Texas schools without providing any distinction between spanking with a hand or hitting with a belt or switch. It then offers quotes from teammate Trent Williams defending Peterson’s approach, and only some mild criticism from Vikings’ broadcaster Paul Allen, which is more used to illustrate that Vikings’ fans were upset. And maybe the most questionable part comes right at the end, when Peterson admits that he still hits his children with a belt and sometimes with a switch, despite telling USA Today after his 2014 suspension “I won’t ever use a switch again” (which is mentioned in this story too). Here’s how the story wraps up:

Four years removed from the trial, he still uses physical forms of punishment to discipline his children—”I had to discipline my son and spank him the other day with a belt,” Peterson says—though he employs other techniques as well. He will take away their electronics, place them in different timeouts around the house, have them do wall squats. “There’s different ways I discipline my kids,” he says. “I didn’t let that change me.”

Spankings are sometimes necessary, though, he insists, especially after repeat offenses. (The belt incident came after he gave his son four chances to correct his wrong.) Peterson says he finds comfort in knowing these lessons will help his children make better decisions in the future. Corporal punishment helped him become the man he is today, after all—a man who loves his kids. “My kids love me. When they want something, they come ask dad,” he says. “They enjoy being around me.”

As for his pledge not to use switches? Peterson says he generally avoids using them.

Again, the person who perpetrated violence (in this case, child abuse) is allowed to frame himself as a victim and allowed to talk about how hard it was for HIM to go through. This is the only update we get about his children: pic.twitter.com/OvpieHyDSD

What Nicole says. In order for there to be a redemption story, there has to be an acknowledgment of wrongdoing. https://t.co/IkUavolJwU

Adrian Peterson was convicted of reckless assault because he beat a 4-year-old boy so severely the boy had injuries on his back, buttocks, ankles, legs and scrotum, and defensive wounds on his hands. Calling it "corporal punishment" understates what he did https://t.co/1kR0Cpo4vo

When the NFL suspended Adrian Peterson, the league specifically said "You must commit yourself to your counseling and rehabilitative effort, properly care for your children, and have no further violations." His admission strikes me as a "further violation" https://t.co/I4QaIDEjtp

This is revolting. I was shocked with how quickly ppl were willing to forget the details of the previous incidents – bruises & lashes lasting for days. On a 4 YEAR OLD.

Worse, ppl who excused it b/c they, themselves, had experienced physical punishment.https://t.co/nltPVaZ2ZU

I really can't get over these huge issues with the story:
– Using "corporal punishment" instead of "child abuse"
– Saying the child didn't move or cry. He had defensive wounds & leaves in his mouth
– Burying the fact he still beats his kid w/ a belt and switch until the very end

With any controversial story, it’s worth thinking about who gets a voice in it and who doesn’t, and how the information is presented. There’s newsworthy information in this story; in particular, Peterson’s apparent admission that “1 time in 10,” he still uses a switch on his children despite his previous public vow not to, and his clear admission to striking his son with a belt. But that information is not the focus of the story; the switch part comes in the very last line. And it’s not questioned by anyone, and there are no critics of Peterson in particular or of corporal punishment in general given a voice. And overall, the story seems designed to convince us that Peterson has “learned” from the “lessons in his flaws,” despite providing no evidence of that.

Corporal punishment in general is not a settled issue; as the story notes, there are parents who still practice it, as well as some schools. But this has no mention of the many, many people and researchers opposed to corporal punishment of any kind, and particularly opposed to corporal punishment with instruments like belts and switches. And the eyes of the law, Peterson stepped over the line of what was allowable in 2014, at least to the degree where felony charges were laid against him. And there’s no real admission here that he did anything wrong, or that he’s learned anything from that situation, but this story still tries to present a redemption narrative. It falls pretty short there, and that’s why it’s taking so much criticism.