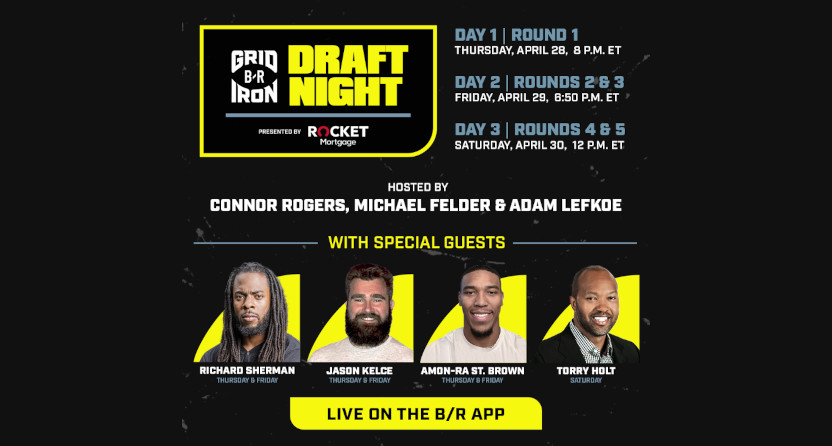 The last few years have seen Bleacher Report expanding their NFL brand B/R Gridiron, and part of the way they’ve done that is with special live shows. The NFL Draft is perhaps a particular focus there; B/R had provided live shows covering it for some time on Facebook Live, but in 2020, shifted to a full show in their app, hosted by Adam Lefkoe alongside B/R draft analysts Connor Rogers and Matt Miller. Miller moved on from B/R last January (he now works for ESPN and also runs his own newsletter), but Lefkoe and Rogers continued the show at the 2021 draft, featuring guests Aqib Talib, Reggie Wayne and Robert Griffin III for the first two nights. And B/R has now announced their plans for this week’s draft, which will see Jason Kelce, Richard Sherman, and Amon-Ra St. Brown) join Lefkoe and Rogers for nights one and two, then former NFLer Torry Holt join Michael Felder for Day 3 coverage:

Bleacher Report’s B/R Gridiron – the most-engaged football brand on social in the U.S. – will offer fans wall-to-wall live stream coverage of the 2022 NFL Draft this Thursday, April 28, at 8 p.m. ET, Friday, April 29, at 6:50 p.m., and Saturday, April 30, at noon on the B/R app and Bleacher Report YouTube channel. Filled with fast-breaking picks, immediate reactions and in-depth analysis, B/R’s Gridiron Draft Night presented by Rocket Mortgage live stream coverage will fuel interaction in the B/R app with distinctive chat channels set up for each team so fan communities can react and engage with one another in real time as they experience the event together.

Adam Lefkoe will return as host with B/R Gridiron draft expert Connor Rogers. They will be joined by Super Bowl Champions and five-time Pro Bowlers Jason Kelce and Richard Sherman as positional experts for the first two days along with Detroit Lions wideout Amon-Ra St. Brown. College football analyst Michael Felder will provide key insights on all prospects for all three days of the draft, with All-Pro receiver Torry Holt joining Felder and Rogers on Saturday to cover the later rounds of the draft.

Another notable element with this year’s show is that the app will have dedicated channels set up for fans of each particular NFL team to discuss their teams’ picks. B/R has done a lot of things recently to try and spark discussion in their app, including even taking user questions for a The Match press conference, and this seems to fit in that vein.

There’s also an interesting collection of guest talent here. Sherman, Kelce, and Holt have all had remarkable careers and are known names. And Sherman in particular is notable for his oft-demonstrated willingness to say what’s on his mind, even when it’s controversial. It’s also interesting to see a younger player joining this show in St. Brown, who the Detroit Lions chose in the fourth round of last year’s draft. The draft experience is fresher for him than for these other panelists, and we’ll see what insights he can bring from that.

As per that release, last year’s show saw 10 million live plays and 32 million visits to the B/R app, with 118 percent in-app engagement growth year over year. So this is a notable event for B/R, and they’ll hope to continue to build on that with this year’s draft show.