Howard Mittman is out as CEO of Bleacher Report, with Turner Sports president Lenny Daniels taking over control of the site. The news first surfaced on Outkick and came on the heels of the resignation of a long term employee who cited a growing leadership crisis tied to diversity issues at the company.

The official circumstances surrounding Mittman’s sudden exit are rather murky, which is likely deliberate. Bloomberg reports that Mittman “stepped down,” while the New York Daily News termed it a “dismissal.” Other reports simply say that Mittman is “exiting” or that there has been a “parting of ways.”  Mittman and Turner did not want to comment on specifics, but a source told Awful Announcing that Mittman “definitely did not resign.” So, what exactly happened here?

Sources at Turner acknowledged that recent events (which we’ll dive into in a moment) did factor into today’s move, but mostly just accelerated the timing of Mittman’s exit. Reading between the lines, it sounds like there was already some momentum for Mittman to leave Bleacher Report before recent criticisms of his leadership snowballed. The source of that momentum is in question, as sources disagree on what may have been already fraying the relationship between Mittman and Turner. Neither Mittman, nor Turner, put out a statement on the change, which adds some smoke to the idea that the parting of ways may have been more sudden in nature, and perhaps not amicable.

What we do know is that early this morning, Bryan Graham (a long time executive at Bleacher Report) resigned from the company, citing a leadership crisis. Hours later, Mittman was gone. Graham’s public Twitter comments on his resignation are screenshotted below. 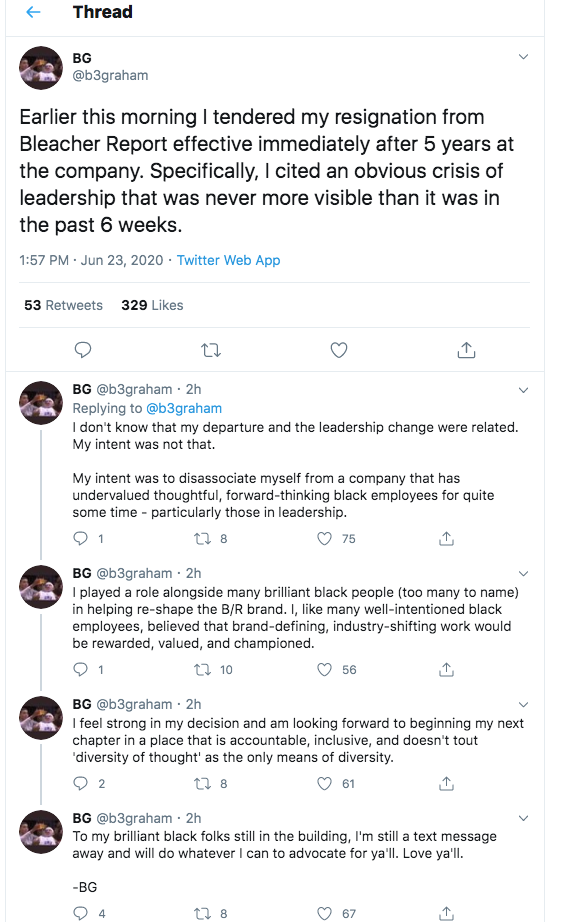 Sources told AA that Graham was at the center of a growing movement within the company to address diversity issues, workplace inclusiveness, and content decisions being made by the Bleacher Report. Graham had started a Black employee group over a year ago, which aimed at addressing those issues with management. While there was an ongoing dialogue, many felt that Mittman and others within Bleacher Report’s management ranks were not sufficiently taking any substantive actions to address the group’s concerns. Specifically, that talented Black employees were not being considered for promotions and Black candidates (particularly female) were often not being adequately considered for job openings. One source said that Mittman had communicated that he was unable to make any high level internal promotions because “the cupboard was bare.”

The festering discomfort by Black employees at the company seemed to escalate in recent weeks in the wake of George Floyd’s murder, when senior officials at the company looked for guidance from Black employees on the type of statement the company should put out in support of the Black Lives Matter movement. After more than a year voicing concerns about the lack of people of color at senior positions, the group was angered that their guidance was only being sought (and over the weekend no less) because there were still no Black employees at the most senior levels at the company and thus, their involvement was necessary because of the continued lack of diversity. Many believe the crafted statement below didn’t ring true to the reality of the workplace culture at Bleacher Report.

On the heels of the statement, an all-hands meeting was called to address those growing concerns. Despite well over a hundred questions submitted for that meeting, most of which centered around diversity issues, Mittman only answered a few questions and his answers were deemed “not substantive whatsoever.”

In the wake of the failed all hands meeting, more employees vocalized concerns about Mittman and the Bleacher Report leadership team, many of which came from Mittman’s former employer Conde Nast, which has been similarly criticized for a widespread lack of diversity and other workplace inclusiveness issues. With more employees demanding a more substantive conversation about race at Bleacher Report, a town hall meeting was convened last week and this time was attended by Turner Sports leadership. According to a source, the meeting was attended by over 400 people and lasted around five hours. Two sources shared that dozens of employees voiced their negative experiences as non-white males working at Bleacher Report and that some were brought to tears while doing so.

Beyond concerns about workplace culture and diversity issues, the site’s content itself was now on the table as being problematic. Many employees felt the company had not invested into much content for Black History Month over the the last decade and that producing any meaningful content received stark pushback from senior white employees. Employees pointed to the internal struggle to get the “Are You Listening?” series produced in 2019. The series has been promoted heavily in light of recent events.

Another key topic in the meeting was that many felt that white employees were often dictating the scope and tone of stories being told by Black talent about Black athletes, which was touched on in the tweet below.

I've been debating posting this, but I feel like in many ways this transparency is more important than my career prospects. pic.twitter.com/vpwrLVlgZS

Per the Daily News, the town hall meeting was moderated by Taylor Rooks, Adam Lefkoe, and Master Tesfatsion, with Mittman struggling to answer many of the questions that centered around “the underrepresentation of African-Americans in positions of power at a sports content company that is designed to profit off Black culture.”

Multiple AA sources were in agreement that Mittman’s departure, regardless of how it was explained or spun, was the end result of losing the confidence of his employees. “He lost the room” was one explanation, while another source quipped “he never really had it!” Current and former employees communicated that they didn’t think Mittman was purposely trying to inflame distrust between employees of color and leadership, but that “he just didn’t get it, and he was insulated with people who didn’t get it.” Over the course of a year, that sentiment took root across a much larger swath of the company and finally boiled over in last week’s town hall.

Less than a week later, hours after Graham’s resignation (which further galvanized frustrated Bleacher Report employees), Mittman was parted with/exited/dismissed with very little of an explanation as to why and how. Employees indicated some relief, although multiple employees raised concerns that those close to Mittman, who he brought over from Conde Nast, were still in many of the company’s senior leadership positions. An internal memo Turner sent out announcing Mittman’s departure touted a series of initiatives aimed at further addressing concerns which included extending of Turner’s People Advisory Committee to Bleacher Report. Per the memo the committee is “a resource aimed at ensuring diversity in all forms is being incorporated into hiring and people management decisions.”

Mittman’s tenure at Bleacher Report lasted just under two years and perhaps may have ended at the two year mark in August (two years is often the chosen length of major talent and executive contracts). One employee was quick to note the problems at Bleacher Report were not specific to Mittman’s tenure and were by no means unique to Bleacher Report. While Turner will likely want to rewind the tape to see how we got to today’s high profile move, going forward, current and former employees agree that the company will need to do a lot of introspection, listening, and implementing of changes to win back the trust of the employees who ultimately became disenfranchised with the company’s leadership.