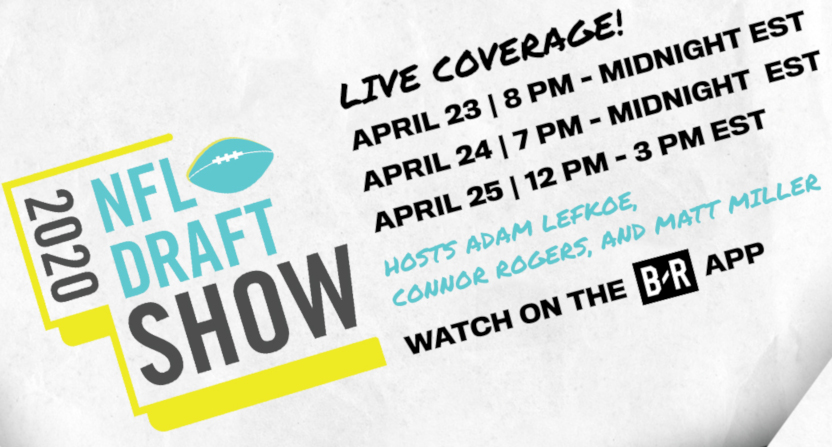 We’ve regularly seen Bleacher Report provide live NFL draft coverage on Facebook Live before, but this year, they’re taking that to their own app. B/R announced Thursday that this year’s draft show will be seen in their app, where it will feature various social interaction features, as well as on their YouTube channel. Here’s more from a release:

When the NFL Draft begins on Thursday, April 23, Bleacher Report will be there to cover each and every pick along with expert analysis and content during its B/R Gridiron 2020 NFL Draft Show presented by Rocket Mortgage by Quicken Loans. Hosted by Adam Lefkoe with B/R NFL Draft expert Matt Miller and Connor Rogers, the show – designed with the young, mobile-first sports fan in mind – will be streamed live in the B/R app, connecting fans through its innovative social functionality.

The B/R app will provide a community of NFL fans the opportunity to comment, build chat groups and share breaking news around their team’s latest picks, combined with B/R’s unique insights to give fans an all-in-one platform for the event. The B/R Gridiron 2020 NFL Draft Show presented by Quicken Loans will stream live Thursday through Saturday, April 23-25, in the B/R app and the Bleacher Report YouTube channel.

Using the B/R app as a way to provide some interaction around this show (now under the B/R Gridiron football brand they’ve been developing) is certainly an interesting idea. Yes, of course, many fans already have ways to discuss the NFL draft with their friends, whether those are text chains or group messaging or video calls or whatever else, but if you have a group of fans that feels like watching this particular draft coverage and chatting during it, this might be a decent way to do this. There’s also the idea of discussion with other fans of a particular team, which could also add some engagement.

And the B/R draft coverage may be a nice alternative for some, especially with ESPN and NFL Network combining their coverage (so there won’t be any differing options on TV, apart from the College GameDay-centric coverage on ABC). And the NFL draft is regularly a key period for Bleacher Report, with their site and app seeing a lot of traffic around the event; in addition to the draft show, they’re promising “a full slate of editorial features and Q&A’s led by B/R NFL reporter Tyler Dunne and B/R football writer Adam Kramer” on top prospects. And they’re supporting this show “with the launch of a special collection apparel line featuring 11 top picks from the draft including Joe Burrow, Chase Young, Tua Tagovailoa, and Justin Herbert,” so there are some commerce activations here as well. We’ll see how this all works out for them.