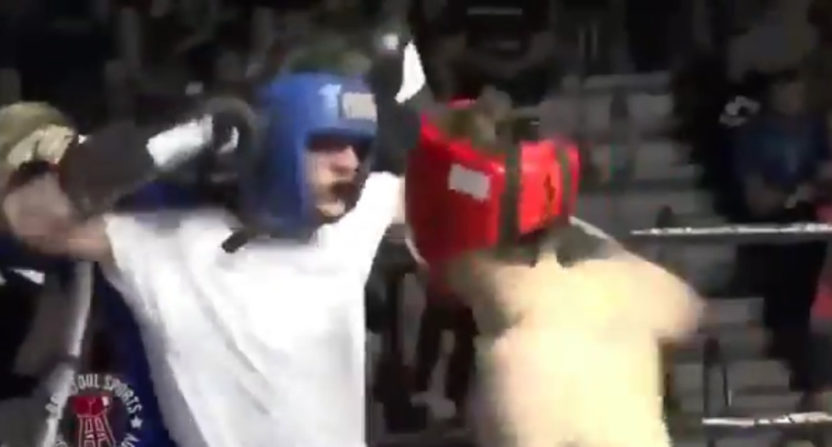 Barstool Sports has made their second corporate acquisition, following their purchase of Old Row last year. Now, they’re buying Rough N Rowdy, an amateur boxing contest in West Virginia, and they’ve announced big plans to expand it, with reality shows and features on fighters leading up to the event, fights in other locales and more.

Portnoy mentions in there that he’s been to the event twice, saying “I’ve never seen anything like it.” He says it sold 13,000 pay-per-views for the most recent one, which took place in March. Portnoy also said the recent controversy involving Sam Ponder and Barstool Van Talk being pulled from ESPN created the revenue needed to buy Rough N Rowdy, which matches what he previously said about how that controversy would be good for Barstool. Here are Portnoy’s key quotes from Thursday’s press conference:

“I knew the second time I had to get this company. It was touch and go, because obviously they had their own business. Thankfully, Sam Ponder came about, made all this money for us with website clicks, the best couple of weeks we ever had. The first fight is going to be December 15.”

Portnoy went on to talk about how this is part of Barstool’s plan to take their content directly to their audience, and how they have big plans to expand Rough N Rowdy.

“What does Rough N Rowdy do for us? It doesn’t matter if you like us, hate us, whatever. We speak directly to our own consumers. Nobody can fuck with Rough and Rowdy. We’re going to put out a product that is unbelievable, we’re going to have Barstool personalities involved, we’re going to do a 24/7 style, go into these fighters’ houses, show how they live, build up the grudges, do all that leading up to these huge pay-per-view events.”

“We’re going to expand beyond West Virginia, we’re going to be in North Carolina, South Carolina, hopefully we get it it here in New York, Massachusetts, Massholes fighting, New York guidos fighting, every cliche that you have for every state, getting in the ring, duking it out Barstool style. Rough N Rowdy’s not changing, it’s still going to be Rough and Rowdy, except we’re going to match what we have, our audience, our media, our promotion, with what they have, which like I said, is a product I’ve never seen before.”

“And guess what? All the boo birds, all the people who don’t like us, you can’t touch it. There’s nothing you can do to stop it. This thing’s going to be huge. I’ve actually said I think it could be bigger than Barstool. You may be looking at Dana White Portnoy right now, who fucking knows? I am so convinced about this project, could be wrong, but I put my money where my mouth is, we bought them, I’m excited. Dec. 15, the next fight, in West Virginia, we’ll be there, we’ll start the build up, Rough N Rowdy, we’re coming for you. And again, Sam Ponder, thank you very much, we couldn’t have done it without you.”

So what exactly is Rough N Rowdy? Well, their website is here, and their just-activated Twitter account is here. But for more detail, Wesley Lowery explored it in a big Washington Post feature earlier this year. He discussed how, at that point, it was an annual event that mostly featured locals hopping into the ring to settle grudges:

One weekend every March, almost every resident in this town crowds the tan-and-gray bleachers of the local armory to watch their friends and neighbors beat one another bloody. The boxing-brawling event — known as the “Rough N Rowdy” — draws more than 2,000 spectators a night in a 3,000-person city nestled so deep in the mountains that your cellphone won’t ring. The winners leave with a trophy, a jacket and a check for $1,000 — the same take-home as a few weeks of soot-covered entry-level work in the local mines.

“People love violence. You’ve got a bunch of people down here who just want to show they’re a badass,” said Breyer Morgan, 21, who has been coming to the fights since he was a little boy and has worked the bell at the event for the past three years. “They see that $1,000 and you’ve got people coming out of the woodwork. There is nothing else to do out here . . . and that $1,000, that’s a whole lot of beer, man.”

…The rules of the brawl are simple: Anyone between the ages of 18 and 35 can sign up, so long as they haven’t boxed professionally. After passing a physical, they enter a single-elimination tournament to compete in refereed boxing matches with three one-minute rounds.

Though a few serious fighters lurk in the field, most are untrained, taking to the worn ring to see if their playground prowess will yield a few moments of glory. Most are unlikely to fight more than once.

The whole piece is a solid read, and is a good look at how this was created (by former boxer Christopher MacCorkle Smith) and how his amateur boxing idea became much more successful in small towns than it was in bigger cities. It will interesting to see how Barstool’s plans to expand this go.

Buying a boxing company is definitely a different move for a media company, but this is something that does seem to align with much of what they’re trying to do, and their idea of pre-fight shows pumping it up should certainly bring Rough N Rowdy a bigger audience. We’ll see how this turns out.