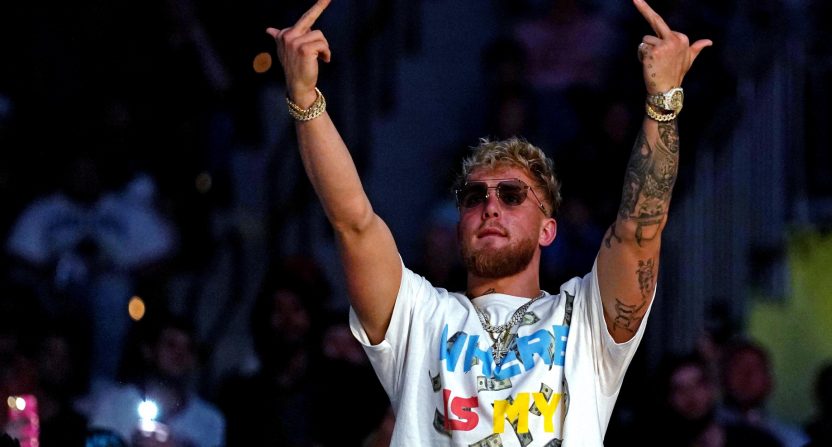 Per Kevin Iole of Yahoo Sports, Triller believes that the defendants, many of which used various YouTube channels for the streams, sold access to the fight for less than its $50 price tag through PayPal links. Triller is also claiming more than $100 million in damages thanks to more than two million unique views of those streams.

Here’s the full statement from Triller, again via Yahoo.

“It’s shocking to think a theft so grand can be done so blatantly and brazenly. There is zero difference between what they did and walking into a market, stealing tons of a product and selling it at a discount in the parking lot. It’s neither civilly nor criminally any different and we are prosecuting to the fullest extent of the law, including working with authorities to bring swift action.

“There were far over 2 million illegal streams, akin to hundreds of millions of dollars. Sites … causing significant damage not just to Fight Club but content creators overall. People put a lot of hard work, time and money into creating a product for the consumer and having it stolen and resold is terribly damaging. As this is a true crime, they are not protected by VPN masking or other firewalls as their activities are criminal and grand theft so we will ultimately find them and prevail not just for us but for content creators in general.”

Illegal streaming and combat sports go together hand in hand. Look at the UFC’s seemingly never-ending quest to crack down on online piracy (which The Athletic’s Ben Fowlkes dove into with extreme detail a month ago), and just check out social media every night of a big fight. People are itching to watch, but not pay the price. There will always be a market for pirated streams.

Triller was clearly not immune from those same woes, and while the company’s next event will probably see the same thing happen, their very public strike against the streamers might make some people think twice before pirating a Triller event.

The analogy has been made before, but the piracy world is like a hydra – whenever you chop one head off, two more pop up in its place. If the strategy of Triller (and the UFC) is to just keep chopping off heads as soon as they can, I think they could get overwhelmed. A more comprehensive, preventative strategy will be needed, though that strategy remains anyone’s best guess.