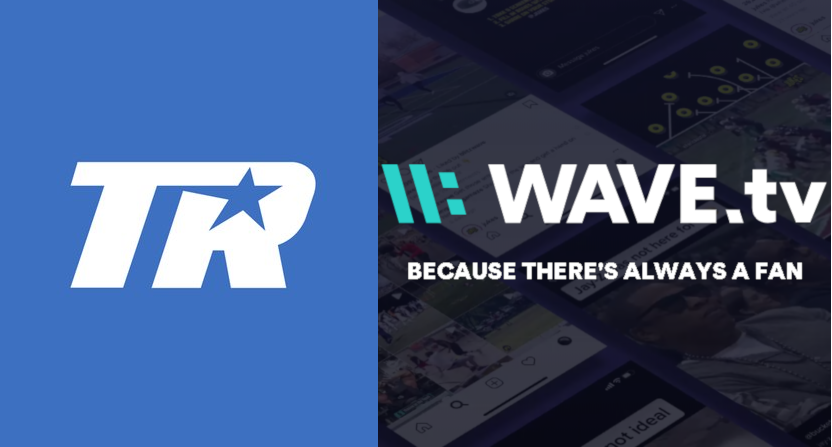 Last month, Top Rank and WAVE.tv signed a content partnership, which will see Top Rank added to the ranks of content partners (now above 115) that WAVE.tv features on its various social channels. This deal in particular is largely about WAVE.tv subbrand Haymakers, which has 6.1 million followers on TikTok, around a million followers on both Facebook and Instagram, and 668,000 on Snap, amongst presences elsewhere. Top Rank chief revenue officer Brian Kelly and WAVE.tv senior vice president (strategy and partnerships) Greg Bobolo both spoke to AA recently about this deal, and they emphasized that it’s a way for Top Rank to expand their existing connections with young audiences and for WAVE.tv to bring in-demand content to those audiences. Kelly said WAVE.tv’s specific loyal audience was a key factor in this deal.

“With WAVE.tv, we decided to team up with them given their incredible production and content capabilities in addition to their incredible breadth when it comes to the combat sports space and the loyal, passionate audience they have with Haymakers and a few of their other handles that we’re working with. I’m focused on growing audience and brand development here at Top Rank, and I want to be very thoughtful in the strategic partnerships that I forge. Knowing that WAVE.tv has a nice stranglehold on that position, we thought it was a good idea to partner up and see if we can make some really great content and help achieve some KPIs (key performance indicators) that we’ve set forth as a company.”

Bobolo said Top Rank was appealing to his company because of the fighters in their stable.

“Top Rank represents, from a content perspective, some of the biggest names and talent in the sporting world when it comes to combat and boxing. They have established names like Tyson Fury, Vasiliy Lomachenko, the hottest fighters in the world, and up-and-coming superstars like Shakur Stevenson, Jared Anderson. Plus, of course, there’s their archive; you’re talking about an insane amount of fight legends, everything from Muhammad Ali to Manny Pacquiao.”

“It’s a very versatile portfolio and it’s been an established promotion for so long. It’s something we’re very excited about, to be able to showcase these incredible fighters and really introduce them to our audience across our combat sports channels, predominantly with Haymakers. And for us, it’s building excitement around tentpole events like the Fury trilogy [fight] coming up, covering all of these in real time. So it really ticks off all the boxes we’re looking for for a partner in general, and then specifically within the combat space. There are really very few that are in the league of Top Rank.”

Kelly said he sees this deal as an important way to further expand Top Rank’s impact with younger viewers.

“One of our main KPIs at Top Rank is brand and audience development, specifically that younger demographic. And given what WAVE.tv has been able to accomplish and the audience they’re attracting via their content and partnerships, we felt this was a very strategic partnership for us to help us achieve our KPIs and also deliver Top Rank boxing content to that Gen Z audience across all their platforms, especially focusing on YouTube, TikTok and Snap, where we know a lot of the Gen Zers spend a lot of their time.”

He said the Top Rank audience is already strong, especially in the demographics of men 18-34 and 18-49, and it’s helpful that it’s also very multicultural.

“Our audience skews heavily multicultural, that is our bread and butter. From a multicultural viewership standpoint, Top Rank is actually number one versus all other major sports. On the TV side, our audience is 57 percent multicultural, the NBA is number two with 51 percent, followed by UFC and NFL at 33 and 29 percent respectively.”

“Haymakers has been around for just under two years, and it’s got an aggregate following of about 7.5 million followers. From a viewership standpoint, you’re talking around 400 million monthly viewers. About 80 percent of the viewers sit within that Gen Z/late millennial demo, 13-34, mostly male, about 85 percent male.”

“It’s really for highlights and stories from the biggest professional promotions in the world, like Top Rank, to funny clips of pro and amateur fighters outside the ring. It’s really the true fight fan’s home, and that is across all platforms in which the WAVE.tv network operates, Instagram, Facebook, TikTok, Snapchat, and YouTube. Haymakers has become a measurable voice within the combat sports landscape in a fairly short period of time.” 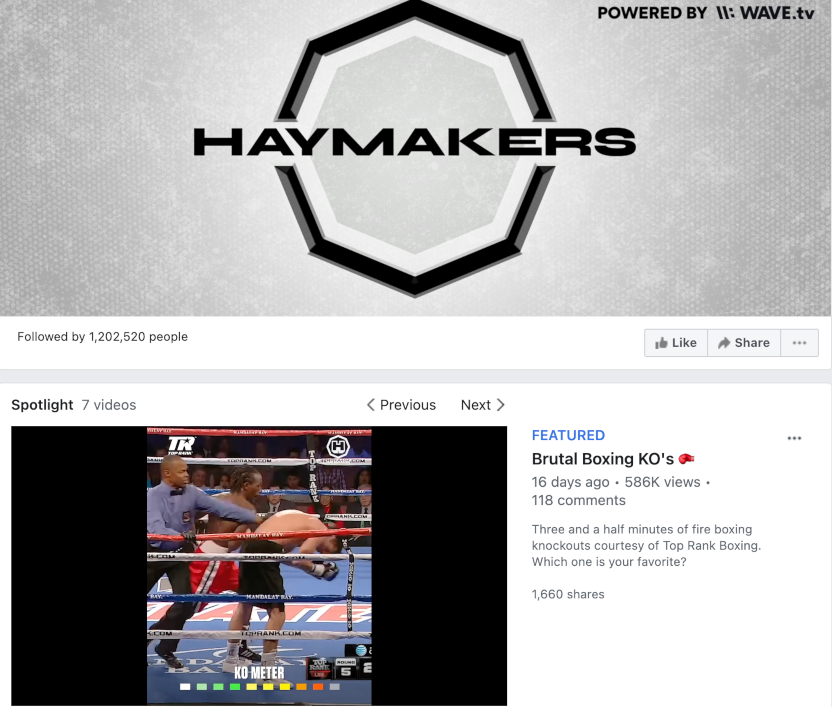 Bobolo said combat sports is going to be a growing area of emphasis for WAVE.tv, one brand they’re really working on pushing further.

“Combat sports is very important. WAVE.tv has really taken this sort of portfolio approach to its media brands, we have about 25 different media brands. The best way to think about WAVE.tv is sort of a front door to a house of brands that live behind it, and we’ve kind of gone sport by sport and genre by genre or fandom by fandom to create these unique brands behind the WAVE.tv brand. …Haymakers is one of three brands we’re going to be really focusing on and leaning into very heavily, investing more over the coming months and years. …It’s done incredibly well and we see a very bright future for what this can become.”

Kelly said it’s appealing to do a deal with a company like WAVE.tv focused on social channels, as that helps expand the reach of Top Rank’s content, especially amongst that younger demographic.

“Working at Top Rank as an IP rightsholder, we want to get our content in the hands of as many viewers as possible, and we want to continue to be young so the resurgence of boxing can continue. And I think the format of boxing is really catered towards the consumption behavior of the younger demographic that’s consuming a lot of this content across social media.”

“It’s unlikely a Gen Zer is going to watch a three-hour basketball game or a three-hour baseball game; however, with boxing, each round lasts two or three minutes followed by a one-minute intermission. It’s arguably the most engaging format in sports. And there’s high passion and anticipation of this moment. And it’s one of the only sports that can last 30 seconds or 50 minutes.”

“And that format and the way Gen Zers are used to consuming content aligns very, very well. So when we’re able to put a knockout on the social platforms or even a full round on Facebook or YouTube, it’s very captivating, because you don’t want to miss that moment.”

Bobolo agreed with that idea, saying his company’s all about trying to emphasize short, sharable clips, and boxing is a great fit for that. 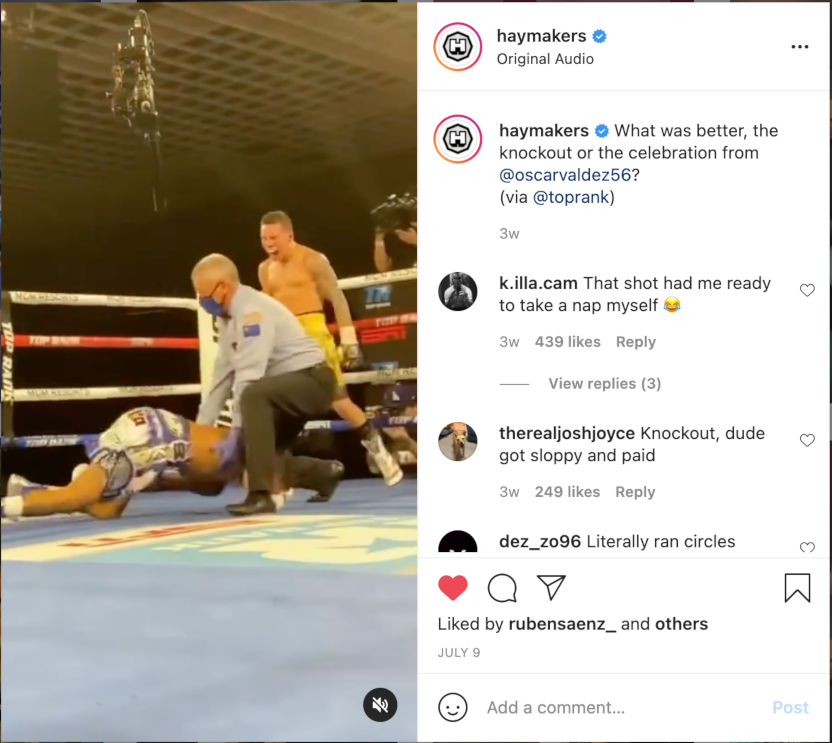 Bobolo said he thinks this partnership will benefit both sides.

“I think it’s going to do a lot for Haymakers and a lot for Top Rank. We represent the largest emerging audience in the world. In aggregate across our network, I think last month we were tipping 8 billion views.  From an aggregate following standpoint, we’re knocking on the door of 100 million aggregate subscribers or followers. It will do a lot for Top Rank, but it’s also going to do a lot for us to engage our audience on Haymakers. And they’re in good company; Top Rank will be one of our premium partners alongside the likes of Bellator, PFL, One Championship, FightTV, but we have dozens of partners within the combat sports landscape.”

This is an early deal for Kelly, who joined Top Rank earlier this year after time at Bleacher Report. He said his goal is to try and boost Top Rank’s brand awareness, especially amongst that younger demographic.

“I was brought over to Top Rank about five months ago. [President] Todd [duBoef] and [founder and CEO] Bob [Arum] decided they wanted to get out of the strict pay-per-view/paywall model they had with HBO, and they were able to strike the partnership [back in 2017, since renewed through 2025] with our great partners at ESPN. And beyond the ESPN relationship, they were really focused on diversifying revenue streams. And I thought that we could really build back boxing and fund a resurgence to what boxing was in the 60s with Ali to the 80s with so many great fighters. And given my background and experience at Bleacher Report, I thought it really was a good fit.”

“Where my focus lies early on is in really just establishing the Top Rank narrative. I think Top Rank has very little marketplace awareness. So one of my real pushes is to really cultivate a story that defined our community of fans and look at the loyal passion of the audience that we connect with across all our various platforms.”